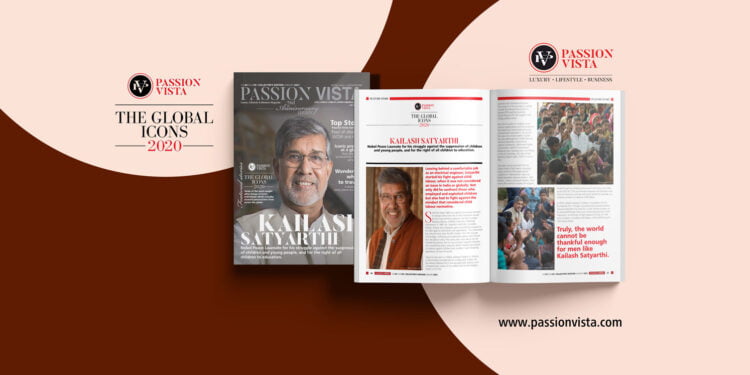 Nobel Peace Laureate for his struggle against the suppression of children and young people, and for the right of all children to education.

Leaving behind a comfortable job as an electrical engineer, Satyarthi started his fight against child labour, when it was not considered an issue in India or globally. Not only did he confront those who employed and exploited children but also had to fight against the mindset that considered child labour normative.

Since the larger fight was against the societal mindset, he always knew that only a mass movement would be the most befitting response. He then founded Bachpan Bachao Andolan (Save the Childhood Movement) in 1980. Mr. Satyarthi’s wife Mrs. Sumedha Kailash, friends and colleagues gave unconditional support in his fight against child labour and exploitation. This movement has rescued more than 90,000 children from the scourge of bondage, trafficking and exploitative labour over the last four decades in India. Not caring even once about the life threatening attacks that he has survived, Satyarthi’s fearless and unrelenting policy advocacy efforts towards elimination of violence against children have resulted in path-breaking legislations all over the world. 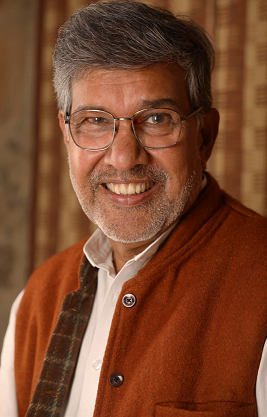 Satyarthi was born in Vidisha, Madhya Pradesh in 1954 to a retired head constable and an uneducated mother. He has always believed that it was exceptionally idealistic and compassionate nature of his mother that had the biggest Photo Credit: KSCF impact on his life.

He was born in a Brahmin family and called Kailash Sharma, till he decided to drop his surname as a symbol of denouncement of the Indian caste system. He then became Kailash Satyarthi (Satyarthi meaning ‘seeker of truth’), and went on to win the Nobel Peace Prize in his quest for education and the safety of children in 2014.

In 1998, Mr. Satyarthi conceived and led the largest civil society network for the most exploited children- the Global March against Child Labour that traversed across 103 countries covering 80,000 Kms, mobilizing unions, civil society and most importantly, children with a sole demand for an ILO Convention on Worst Forms of Child Labour. This march led to the adoption of ILO Convention 182 on the Worst Forms of Child Labour which went on to become the fastest ratified convention in the history of ILO. Mr. Satyarthi is also the architect of the Global Campaign for Education, an exemplar civil society movement working to end the global education crisis.

Mr. Satyarthi is credited for the first ever civil society – business coalition by establishing Rugmark (now known as Good Weave) – the first of its kind certification and social labelling mechanism for child labour free carpets. This mechanism was engineered by Mr. Satyarthi much before the phrase Corporate Social Responsibility was even coined. In 2014, he was awarded the Nobel Peace Prize for struggle against the suppression of children and young people and for the right of all children to education.

In 2016, Mr. Satyarthi founded a novel and unique initiative Laureates and Leaders for Children that has brought together several Nobel Laureates and Leaders from across the globe to build a sense of urgency, collective responsibility and a strong moral voice to galvanise political will for ensuring the rights and safety of world’s children and young people in an endeavour to end violence against them and creating a child-friendly world.

Mr. Satyarthi’s unrelenting efforts to end child slavery, trafficking, forced labour and violence received international support when he succeeded in getting child protection and welfare-related clauses included in the Sustainable Development Goals (SDGs) of the United Nations back in September 2015. Mr. Kailash Satyarthi envisions a world where the Youth realizes its truest potential as the agent of positive social transformation. It is for this reason he launched the 100 Million for 100 Million Campaign in December 2016. This campaign is a global intervention to mobilize 100 million youth for shaping a better future for 100 million children who have been denied their rights and liberties.

This led to the Union Cabinet approving The Trafficking of Persons (Prevention, Protection and Rehabilitation) Bill in 2018, followed by the Lok Sabha. It also led to the passage of Criminal Law (Amendment) Bill, 2018 in both the houses of Indian Parliament.

Kailash also holds the distinction of engineering the first ever social labeling initiative ‘Rugmark’ when Corporate Social Responsibility as a concept and phrase were not even coined. Rugmark now known as Good Weave ensured that carpets were not made by children. This concept became very popular with more and more sectors willing to adopt similar mechanisms in their supply chains.

Following his life of social reform, it came as a surprise to none when he was conferred the prestigious Nobel Peace Prize, along with Malala Yousafzai, in 2014, “for their struggle against the suppression of children and young people and for the right of all children to education.” 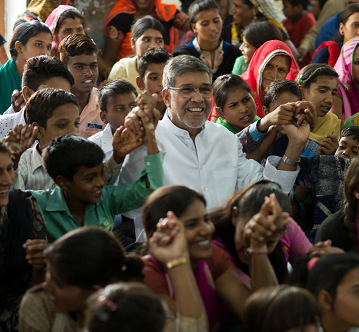 In the four decades that Kailash has pioneered the movement against child labour and child abuse, his work has been recognized t Photo Credit: KSCF hrough several national and international awards. The long list of his prestigious awards include the Harvard Humanitarian Award 2015 and the Guinness World Record 2017 for Largest Child Safeguarding Lesson.

He is the founder of multiple social activist organizations and has served on the board and committees of several international corporations. As one of the rare civil society leaders, Kailash has also addressed the United Nations’ General Assembly, International Labour Conference, UN Human Rights Commission, UNESCO and several Parliamentary Hearings and Committees in the US, Germany, UK, Italy, Brazil, Panama, Nepal, Spain, Chile to name a few.

This year, he has launched the Fair Share to End Child Labour campaign which will form the largest global coalition of international agencies, Nobel laureates, business leaders, faith leaders, unions, and youth leaders, from across the world to achieve the biggest breakthrough for achieving the end of child labour by 2025 as per SDG 8.7. This survivor-led campaign will demand a fair share of resources, policies and social protection globally as a necessary means to eradicate child labour.

In 2004, Kailash Satyarthi Children’s Foundation (KSCF) founded by him, through concerted and sustained actions, demonstrated that the need for a child friendly society can be achieved through direct and continued grassroots level interaction. It continues to fight against all kinds of child rights violation, including child labour, child trafficking and child sexual abuse.

Truly, the world cannot be thankful enough for men like Kailash Satyarthi.