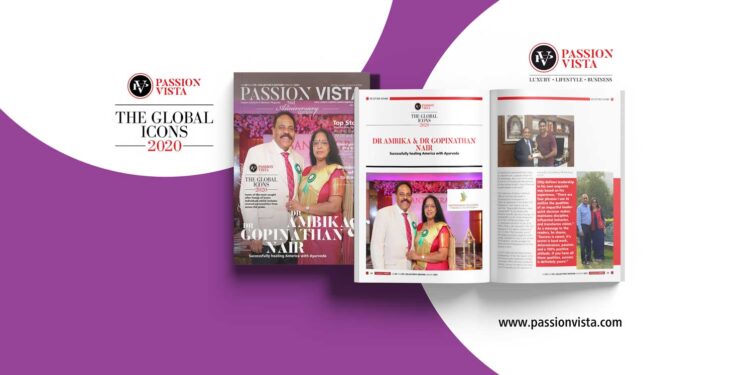 It may well be the year of the Indian diaspora in the United States of America. While some like Kamala Harris have risen to rule from the front, there are others who are working silently but steadily to make America healthy again. And none have played a part as significant as that of the husband-wife duo of Dr Gopinathan Nair and Dr Ambika Nair.

When people struggled to find equilibrium in a pandemic struck the world, Dr Ambika and Dr Gopinathan provided relief to plenty through their Santhigram Wellness Ayurveda across the US as well as Canada.

In a land famed for the most advanced developments, just how difficult was it to find takers for the ancient alternative wellness? “Challenging! Primarily because there was absolutely no precedence of running an Ayurveda wellness business in the US. We have overcome various obstacles to establish ourselves in as many as five states namely New Jersey, New York, Texas, Illinois and Wisconsin,” said the duo. 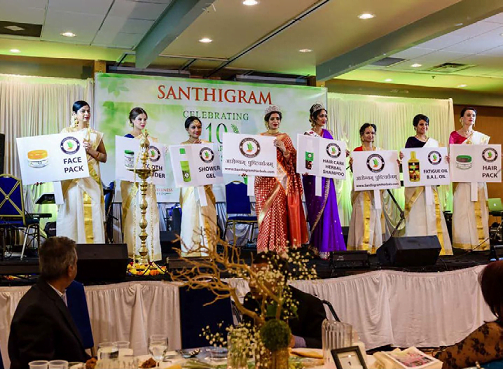 Their journey into Ayurveda began when Dr Gopinathan quit as a top executive of a premier IT company to support the work of his holistic physician wife, Dr Ambika, in promoting the traditional Kerala Ayurvedic Panchakarma Therapy for health rejuvenation and chronic ailments. Dr Gopinathan put his management degree to good use and the couple launched three Santhigram centres at New Delhi in 1998, followed by two centres in the UK by 2006, before spreading their wings through America in 2007.

Ayurveda, they staunchly hold, is the ‘science of life’. According to the Nairs, Ayurveda is the most comprehensive scientific health care system that has been practised by omniscient sages since 5000 years. Its historical roots lie in the Indian subcontinent. The basic philosophy of Ayurveda is to achieve a perfect balance in mind, body and soul. While modern medicine stresses on the body and neglects the mind, senses and soul, Ayurveda believes that any infirmity in the three leads to illness. “With Ayurveda, we aim to restore the balance among the various bio-physiological forces (doshas), constitution (prakruti) and mind (manas), without any side effects, using the unique Panchakarma therapies (Purification therapies) for the removal of toxins and waste materials from the body to purify the biological system and eradicate the disease completely,” says Dr Ambika, adding that their sole aim is the promotion and global acceptance of Ayurveda.

For their pioneer efforts to promote the Kerala Panchakarma technique to benefit people, the Nairs have won many accolades, the biggest of which was Santhigram being the first ISO 9001:2000 certified provider of Ayurvedic services in India.

The Indian Institute of Complementary Medicines awarded Dr Gopinathan an Honorary Doctorate in 2011, the Society of Industry & Business Achievements gave him the ‘Pride of the Country Award’ in 2005, Bharat Nirman conferred to him the ‘Super Achiever’ in 2008, and he won the ‘International Dharma Award’ from the Association of Ayurvedic Professionals of North America (APNA) in 2011. In addition, the New Jersey State Senate and General Assembly through a Joint Legislative Resolution honoured him for the meritorious record of service, leadership and commitment for the success of Santhigram Ayurvedic Company in 2018. 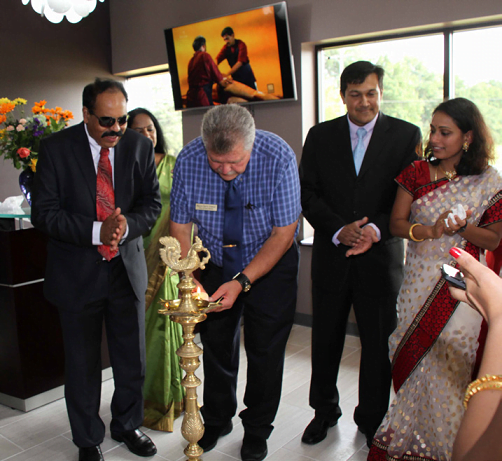 Needless to say, the Nairs boast an envious clientele which includes the likes of Dr K.R. Narayanan, the former President of India, and Bhairon Singh Shekhawat, the former Vice President. The couple’s work has also been instrumental in the acceptance of the Ayurvedic system of treatment by various insurance agencies as well as Public Sector Companies like Airports Authority of India and Power Finance Corporation in India.

Their most commendable feat however has been their ability to make inroads in America. Interestingly, the Nairs credit the success of Ayurveda abroad in part to Yoga. “Ayurvedic philosophy has been very popular in most Western countries due to the growing popularity of Yoga. Ayurveda is the governing principle behind integrating treatments and developing specific lifestyle management programs. Holistic health is one of the top trends of the modern world and complementary medicine is viewed by many as a solution to the rising incidence of chronic diseases and spiralling healthcare costs in the Western world,” they share.

Yet, challenges remain manifold. Ayurveda is still not a recognized healthcare system in the US. Getting trained Ayurveda professionals in America was the first challenge, so the Nairs decided to get work visas for Indian professionals. Due to lack of knowledge surrounding Ayurveda, getting work visas was also difficult, as was getting practising licenses.

Then they faced the Herculean task of insurance. With Ayurveda not being covered under medical insurance, many willing patients were not able to avail the treatments. Thus in the past year, the Nairs put in tremendous effort and managed to facilitate reimbursement from some insurance companies based on the eligibility of clients.

Today, they can look back on their arduous journey with pride. When they began, Kerala Ayurveda therapies were expensive and only available in resorts, thereby elusive for the masses. To make authentic Ayurveda affordable and approachable for all, the doctor couple had to create an entire ecosystem to make their Global Ayurvedic Wellness centers a reality. From global recruitment strategies to world-class product manufacturing, they had to be the pioneers in all to make the customer experience safe and splendid.

Consequently, Santhigram was one of the first FDA registered ‘Ayurvedic’ company with FDA compliant products under the brand name ‘Santhigram Herbals’ undergoing strenuous lab testing to ensure they are heavy metal and Pesticide free herbal products. They were also the first to create Ayurvedic products using Hemp oil in the USA.

With 2020 forcing all of us into a new reality of online services and experiences, the team at Santhigram was quick to adapt. And now Santhigram is on its way to become a Tech-enabled and the first HIPAA compliant Ayurvedic wellness company to safeguard client data in this world where cybersecurity cannot be sidelined further.

To continue with the Nairs efforts to bring Ayurveda to the mainstream medical stage, they have started ‘Santhigram Foundation’ to fund research and public education programs to validate Ayurveda socially and scientifically. They have created multiple Wellness programs backed by Biostatistics and Health Informatics in partnership with modern medical professionals targeting specific problems such as Non-opioid pain management program, Oncocare programs, ADHD Ayurvedic program, Age management programs for Geriatrics.

They go on to reveal, “In order to meet the ever growing demand of our services and to cater to the shortage of trained Ayurvedic consultants and Panchakarma technicians in the US, we have also successfully established an Ayurveda training school with the approval of the State of New Jersey.”

If one happens to speak to this duo, they will be quick to brush away all the appreciation and instead insist they have a long way to go.. Therein proving just how exceptional they truly are!