in THE GLOBAL ICONS 2020
Reading Time: 4 mins read
0
A A
0
0
SHARES
29
VIEWS
Share on FacebookShare on Linkedin

Working Tirelessly to Become One of the Most Admired Global Leader

“Success is no coincidence. It is hard work, perseverance, learning, studying, sacrifice, and most of all, love of what you are doing or learning to do-” Pele.

Chairman and Managing Director at Micro Labs Limited, Dilip Surana, is an illustration of this famous quote. Born in Bangalore and hailing from the village of Balrani, Pali District, Rajasthan, he always desired to reach heights in the pharmaceutical world. With that in focus and with an untiring spirit, Dilip excelled at it with global recognition.

Today, with over thirty years of experience in the pharmaceutical industry, Dilip feels content with everything he’s accomplished and achieved over the years. His yearning to enter this field is understandable since he grew up watching his elders thrive in the industry. In 1983, when he was young and budding with energy, Dilip took over the operations of his family business and rapidly absorbed the nuances of corporate management. From then to now, he has taken the company to the pinnacle of success.

In early 1994, Dilip pioneered the concept of specialty by introducing various divisions of the pharmaceutical industry, namely, Cardiology, Neuropsychiatry, and Ophthalmology. He also instilled stringent quality standards in the pharmaceutical enterprise. As a result, Micro Labs has to its credit, all the international regulatory approvals, including US FDA, UK MHRA, MCC, South Africa, Health Canada, WHO, Geneva TGA, Australia Medsafe, New Zealand PAHO (USA), IDA (Netherlands), & many regulatory bodies of emerging markets reflecting the high standards of quality, regulatory compliance of research and manufacturing facilities. 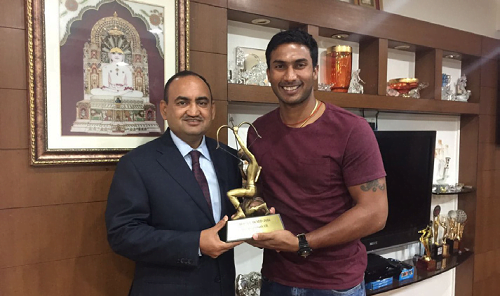 Dilip is responsible for diversifying the pharmaceutical manufacturing company with products ranging from oral solids and liquids to topical and injectable. He was influential in setting up thirteen world-class state-of-the-art research and manufacturing facilities for Micro Labs, covering Active Pharmaceutical Ingredients (APIs), and finished dosage forms as well as infrastructure for new drug discovery. The manufacturing units are designed to meet the current global standards of GMP and safety standards for personnel.

At Micro Labs Limited, Dilip overlooks the overall strategic direction, Indian business, and manufacturing. He recurrently participates in various international seminars and summits relating to the pharma industry. Additionally, Dilip is also involved in the induction of senior pharma veterans, bringing in the much-needed professionalism in the company.

So far, under Dilip’s supervision, Micro Labs Limited is thriving in fifty countries, and he plans to proliferate to many more countries in a regulated market. Dilip aims to steer his company to become a global generic pharmaceutical company with a quality that matches with the world.

To ensure that Dilip never goes out in touch with the market’s demands and customer’s needs, he constantly interacts with doctors and the field force. This practice ensures that he always possesses a good grip on the industry’s latest.

Despite having achieved so much, Dilip still works hard to hold on to the reigns of the company with dignity and diligence. To ensure he stays committed to this promise he made to himself, he sticks with his strengths and makes execution at work his top priority. With a vision to become a leader in the development, manufacturing, sales of premium pharmaceutical products, Dilip sticks to a practical approach to attain it. “Set goals, i.e., instead of creating a vision that is unapproachable, one should have a step-based approach to progress towards the vision,” he shares.

Dilip approaches challenges as a part of life. He believes that through hard work, determination, and a bit of luck, anyone can overcome their circumstances and achieve extraordinary success.

The world is a competitive place for survival. But Dilip thinks that by moving at a fast speed and focusing on the unceasing revolution, one can prosper in all competitions. He also does not support brooding over failures or mistakes. In this regard, he says, “Accept failure, learn from the mistakes, and move on instead of moaning about it and giving up.”

With this spirit, Dilip has made his thirty years of the professional journey seem like an eventful ride. Of course, challenges, failures, and mistakes were a part of it. But his inspiration and mentor, his father, Shri G.C. Surana, taught him better to make it through these difficulties.

Dilip’s passion is to work tirelessly and build a massive empire. At the same time, he doesn’t wish to make a hue and cry about his success and likes to stay out of the limelight. He always talks to his team about how he believes only in results and not in reasons. While he expects the same out of them, he doesn’t fail to set an example for them at all times. It is for this reason that Dilip’s need to become a global business leader doesn’t include even a streak of selfishness. “Whatever I aspire to do, is not solely for me. The excellence that the company has achieved, is achieving, and will achieve comes out of my aspiration to do something innovative for my team, so that we can rise together.”

It isn’t surprising that a man who’s a team player despite the chair he sits on doesn’t include himself in the rat race nor wishes to be a tiger. Dilip is proud of creating his own benchmark, being an obedient son, a popular leader for his employees, and a man of his words. In this list of his personal achievements, he also wishes to add is one of the most
lovable leaders in the world.

The University of Azteca conferred Dilip an honorary doctorate in pharmaceutical management. In 2020, he appeared on the Global CEO Magazine’s cover feature. He also won the “Responsible Business Leader Award-2019” by the Responsible Business Awards. Not very long ago, he ranked 85th on the Forbes Magazine’s list of the 100 Richest Indians with an estimated net worth of over $1.6 billion. Dilip is also featured in The CEO Magazine’s first edition in their list of the 14 CEOs The Economist, one of the leading business magazines in the world, included his story in one of their 2016 editions. He also accepted the award for the Entrepreneur of the Year Award in 2014.

In 2013, Dilip won the Most Dynamic Entrepreneur of the Year Award at the 4th Annual India Leadership Conclave
and Indian Affairs Business Leadership Awards. He was honored as the Great Son of Karnataka by the Governor of Karnataka, his Excellency HR Bhardwaj, in 2011.

Dilip defines leadership in his own exquisite way based on his experience, “There are four phrases I use to outline the qualities of an impactful leader-quick decision maker, maintains discipline, influential behavior, and transforms vision.” As a message to the readers, he shares, “Success is sweet, it’s secret is hard work, determination, passion, and a 100% positive attitude. If you have all these qualities, success is definitely yours!”