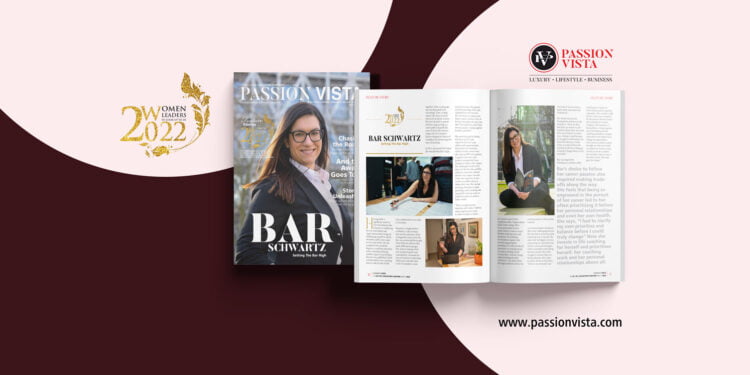 Having made a significant mark in the tech industry, Bar Schwartz is redefining the way individuals and organizations lead change by challenging oneself to clarify intention and be more open to new roles in life. She has completed two academic degrees, a coaching education and is currently pursuing another degree in psychology. She has even published a book and started her own coaching practice side by side of full-time employment as an expat in Germany.

Raised by a single mother in Hadera, a city in Israel that was the epicentre of the immigration wave in the 90s. Bar was surrounded by people from different cultures who spoke different languages. Her desire to belong while still maintaining her own individuality, increased her natural interest in individual differences and what does it take for people to come together. From a young age, she was fascinated with technology. Thus, in high school, she chose to study advanced computer science. She later decided to pursue software engineering as a career path and gradually came to know the massive impact the tech industry had on shaping the future of workplaces by pioneering new ways of working.

In 2011, she joined SAP where she was introduced to Agile ways of working. She gained fruitful knowledge there and expanded her role beyond her core focus to explore new future careers options. One of her key learnings, she says, was that “best solutions come from diverse people coming together to solve a problem”.

She soon relocated to Berlin, Germany in 2013 and experienced a new work culture and organisational hierarchies that made her rethink various career roles. She took up different positions in quality assurance and product management in an attempt to improve her impact. She challenged herself every day to be the best she could be until she eventually realised that her true impact was not in her own expertise, it was on how to enable others to utilise their own. She started pursuing education in agile, psychology and coaching and poured this into her work to enable her teams to achieve better results.

“There is a gap between intention and reality. I believe many organisations want to make workplaces better for women and all their employees alike. Organizations today make a huge effort to accommodate diverse needs when it comes to more flexible working times and locations. Nevertheless, we should not ignore that in most organizations nowadays it is still considered immature or unprofessional to express feelings which trumps their cultural change and psychological safety initiatives.” she states about the organisational culture for working women in the present scenario.

As a woman leader, she deems there were challenging barriers that she had to overcome while remaining true to herself. She states that the biggest con was connecting on a personal level with her peers and managers, which eventually made taking decisions harder due to the struggle to remain objective. Being authentic often came at a price for her as she states, “you are not everyone’s cup of tea and it was not always appreciated, welcomed and understood.”

Her mantra for growth, development and success she remarks is “There are facts and there are stories we tell ourselves about those facts that drive us to behave in certain ways. Change is hard because we struggle to differentiate the facts from the story. Under stress, we tend to blame the external world when things go wrong but change always starts internally.”

Bar was inspired by listening to a podcast called Coaching for Leaders by Dave Stachowiak during long commutes. This marked a shift for her as she was so inspired by the podcast that she joined the Coaching for Leaders Academy. She mentions, “I learned how to bring together my tech background and coaching education to inspire and achieve true behavioural change in organizations. Dave and my academy cohort thought me that every book is written one word at a time. At first, we write to clarify our storyline. Step by step, it becomes a book. The same goes for change.”

Bar’s choice to follow her career passion also required making tradeoffs along the way. She feels that being so engrossed in the pursuit of her career led to her often prioritising it before her personal relationships and even her own health. She says, “I had to clarify my own priorities and balance before I could truly change” Now she invests in life coaching for herself and prioritises herself, her coaching work and her personal relationships above all.