A Synonym for Endurance, Stamina, and Spunk!

A man who can say, “My dreams don’t let me sleep,” is an example of striving for what you really want. Freddy Daruwala, an established and much-loved actor, moved to Mumbai from Surat to find the bliss that he has today. His dreams and achievements keep him at peace, enough to race to the next step. What kept him grounded throughout his line of achievements is remembering that it was never about the money, but about passion and belief!!

Bagging a place in the acting world isn’t an easy task. Freddy, too, sacrificed a lot of comfort, money, and relationships to be where he wanted to be. His quest to be better in everything gave him the confidence to keep going. “I have believed, and I still believe that I’m born to be bigger and for bigger reasons,” Freddy says.

Freddy relies on the faith that it doesn’t matter where one is born, who they know, what they have, or when they’ll be a part of the game. All that matters is how much one wants something and how hungry they are to achieve it.

The charming actor is currently loaded with work and cannot wait for the pandemic to end so that he can hit the sets and the screen again. While he’s already working on a Telugu film, he recently signed two Hindi movies and a web series too.

Walking to the set and standing before the camera for a shot gets Freddy’s heart racing, b photo credit Jalaj Tyagi ut more with enthusiasm and less with nervousness. Apart from living his passion, he is also an ardent fan of riding bikes. In his free time, Freddy enjoys taking long bike rides, which help him rejuvenate from work. 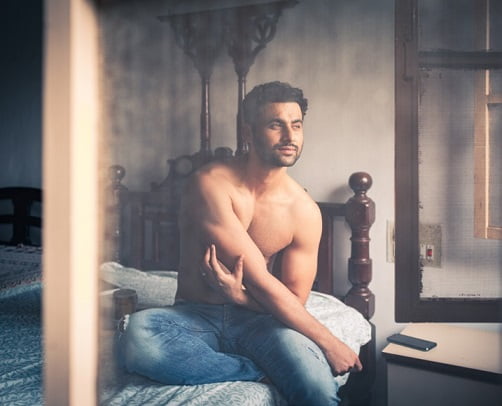 From time to time and stage to stage, Freddy has looked up to various people. Being a sportsman all his life, he soaked inspiration from people like Valentino Rossi, MS Dhoni, Sachin Tendulkar, Kobe Bryant, and Tom Brady, to name a few. He adored them not just because they are athletes but also because of their values, ethics, discipline, dedication, lifestyle, and vision for their future.

In Bollywood, Freddy likes how Amitabh Bachhan, John Abraham, and Akshay Kumar steer their career with uniqueness. He resonates a lot with their lifestyles and wishes to be like them.

Freddy considers his family and my friends his true assets. “I could have never been what I am today without them.” Hailing from Surat and living in Mumbai, he makes sure not to let a long gap take space between his friends and family. Freddy travels back and forth to Surat since he has a set of friends in both the cities, all of them very dear to him.

The man with so many more dreams to achieve is now a father to two young boys. Freddy exclaims how he and his wife find the learning experience of being parents most enjoyable.

Freddy feels like he’s at a stage in his life where the younger and older generation, both, inspire him to work harder and value his family at the same time. Very connected to his family, he considers his beautiful older sister, his second mother, and his nieces as good as his own.

Friends have been a very integral part of Freddy’s growth, both personally and professionally. “I truly believe one can judge a man’s character by how old his friends are! It speaks about your level of genuineness and loyalty. I’ve been lucky to have friends old enough to call my family.”

Setbacks are a part of life. There came one point when Freddy had to sell his bike, the one thing he loves after acting, to sustain in Mumbai. Shockingly, this phase came when he already delivered a movie like Holiday. His work in the movie convinced a producer to cast Freddy as a positive lead. Freddy invested all his time for over a year. Sadly for reasons unknown the film was shelved, leaving Freddy with no other projects. But if that setback was enough to get the man to pack his bags, he wouldn’t be among the Men Leaders to Look Upto in 2020!

If there is one thing that Freddy would want is that the interviewer and the interviewees to be more honest and talk about the mental struggle to keep going even when nothing is going.

Freddy Daruwala is a synonym for Believing in Ones self, hard work and most importantly being integrity. It doesn’t matter how much you achieve, earn the name, fame or money as long as you don’t forget to give respect, love and equality to people.