Versatile, Assiduous, and a Superlative Leader

Versatility is rare. When you find it in yourself, you should make the most of it. Dr. Ricardo Saavedra Hidalgo is an International Speaker, a Master Coach Trainer, a Business Consultant, and an Entrepreneur. His achievements and involvements are a large part of him that we cannot miss. With over twenty-five years of experience as a Business Consultant, Dr. Ricardo successfully implemented a number of national and international operations.

He has executed many educational technologies, successful administrative designs, application of acceleration models & innovations, setting out the diagnosis, and designs of organizational structures. Dr. Ricardo has also created maps of leadership and the integration of effective corporate teamwork. As the strategic leader of Azteca University, he played an active role in the institute’s expansion to twenty-five Countries and Sixty-Three Cooperation Agreements worldwide. In a lay man’s eye, Dr. Ricardo is exceptional.

As phenomenal as it sounds, it is because of him that students are the priority at the Azteca University. At this institution, Dr. Ricardo takes care of all executive matters to ensure smooth daily operations and growth opportunities. 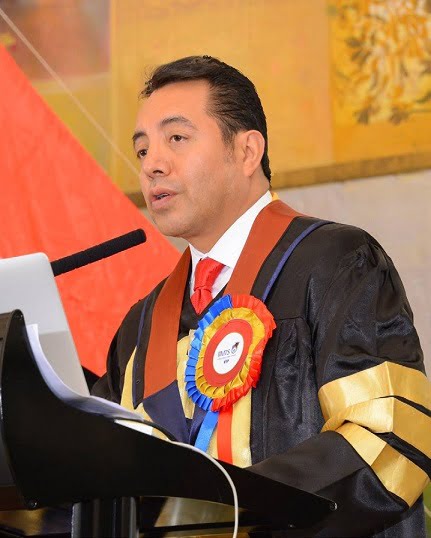 He grew up in a poor family, where he experienced family violence and extreme poverty, then after, he suffered from addictions, he ran away from home to emigrate to the United States, he decided NOT to be a victim, but take action in life to overcome; this young genius got his High School and Graduated at New York, USA. Being a student himself, Dr. Ricardo felt there are unprecedented demands, opportunity and diversification in higher education, as well as an increased awareness of its vital importance for sociocultural and economic development. The further he researched this, the more it was clear that the future generations would require the latest international skills, knowledge, and ideals. “Higher education always faces a challenge when it comes to financing, equity of conditions, and skill-based training. I wanted to be the one who contributed to making a positive change to the realm of education,” Dr. Ricardo divulges; today Dr. Ricardo Saavedra is the Director & Chair of International Programs at Azteca University, one of the leading internarnational universities worldwide.

Dr. Ricardo bears a witness to the power of resilience as a person and in business. Working with thousands of people in the past few years, he said there were times when he wished to avoid certain obstructions at work but couldn’t. Even though the hard way, he learned the lesson of such hindrances not sparing any businessman. Dr. Ricardo records his experience as a risk-taking businessman, “I conjecture that mistakes and personal challenges to help a person and business grow. My collaborators and I recovered, became stronger, and went ahead to fix things. Mistakes are the opportunity to improve.”

No matter how good a leader is, when failure knocks on your door, it temporarily tends to get your spirits down. It was during one such incident when Dr. Ricardo understood how a leader’s strength lies in keeping distractions at bay. The art of focusing is in the hands of the groundbreaker.

You can hold on to it firmly or let go as sand. Dr. Ricardo and his team at Azteca University also took a reverse turn from throwing a towel but held on to the bright side instead. Had they not done that, so many students wouldn’t receive such educational opportunities today. “Teamwork isn’t something that you can survive without when wanting
to touch the sky.”

Much like several other leaders who have reached heightened success, Dr. Ricardo too agrees that empathy is one of the hardest leadership lessons. He finds that exchanging feelings and being able to put ourselves in other’s places is challenging at workplaces and in official relationships. But getting that equation straight is beneficial for healthier work environments and comfort to survive as a team. “It enables prosocial or helping behaviors that come from within, rather than feeling forced.”

As somebody who has seen the education and leadership world so closely, Dr. Ricardo expresses his fear that the younger generation isn’t focusing on developing their soft skills. They are extensively consumed by digital devices, which could be the cause of a company’s weakness. “The Millenials lack emotional intelligence, complex reasoning power, and the skill to negotiate & pursue,” he explains based on recent research and his familiarity.

The education industry underwent massive changes during global lockdown. But Dr. Ricardo accepted the situation of virtual learning with grace. He acknowledged how there are ways it has paved the way to improvise teaching methodologies in the future. He, along with several industry experts, confirm that remote learning is an educational revolution.

Dr. Ricardo has several tips to keep his team energized, but he shares a few to help young entrepreneurs- know your team, encourage their imagination, use life coaching, celebrate milestones, refocus when needed, be a role model, and EXPRESS GRATITUDE & praise for great work. Another helpful tip is to use The Business Model Canvas template to keep work organized and streamlined.

As an educator, Dr. Ricardo understands the impact of asserting how the youth should feel responsible for the environment. They ensure that graduate-level students study environmental science as a subject to encourage them to serve and save nature.