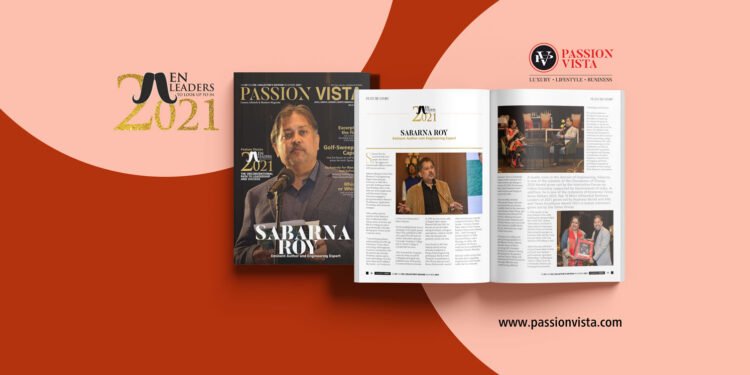 Sabarna Roy has achieved what most people only dream of – He juggles two diametrically different careers with success and ease.

Sabarna obtained a First Class Honours Civil Engineering Degree from Jadavpur University in 1988. He is currently working as Senior Vice President and is in the 26th year of his employment with Electrosteel Group, where he is engaged in giving leadership to Business Development, Applications Technology and certain key strategies.

What catches some by surprise is that Sabarna is also a Celebrated Author. Always aware of his love and flair for writing, he took it up professionally only after having spent 19 years in the Corporate sector.

“I started keeping diaries and journaling since the age of fourteen. I wrote about everything: what happened at school; conversations with my parents; my moments of sadness, elation, and so many other things. Over the years, these diaries inflated like novels – as if written in a stream of consciousness,” shares Sabarna.

His first published book was an anthology of 20 English poems titled: Pain, published in 1986 with a gift of Rs 200 from his mother, that sold in Jadavpur University, Presidency College and St. Xavier’s College in Calcutta like hot cakes.

After he joined the Corporate sector, he wrote on and off in Bengali and English and published some of his poems in renowned literary journals.

In 1994, he even wrote a play in Bengali titled: Ajante. Between 2002 and 2005, he became an oral storyteller among his friends, colleagues and relatives, a habit he started with a lot of passion but gradually waned with time.

It was finally in 2007 that Sabarna started writing seriously in addition to being a Senior Engineering professional. His first book ‘Pentacles’ was published in 2010. He has since penned 8 literary fiction works, most of which have become critically acclaimed bestsellers. These include – Pentacles; Frosted Glass; Abyss; Winter Poems; Random Subterranean Mosaic: 2012 – 2018; Etchings of the First Quarter of 2020; Fractured Mosaic; and A Marriage, an Affair, and a Friendship. His literary works have been published by Leadstart Inkstate, Mumbai.

Owing to his writing style and growing popularity in the literary circles, Sabarna was the Guest of Honor at Aaveg 2021 Literature Festival in Lucknow. During the pandemic, he attended various Literary Meets and Institutional Panel Discussions through different video conferencing platforms.

A TEDx speaker, he has many honours to his credit, including the Literoma Golden Star Award 2020: Lifetime Achievement; Certificate of Appreciation for featuring in the Hall of Fame of Literoma International Symposium on Literature 2020; and the Times Eminent Writer of the Year Award by TOI Kolkata in 2021.

He is a firm believer in the Paris Climate Accord and believes in lowering the Carbon Footprint in the industry to reverse the climate change effects on the planet. He regularly visits national and international conferences to talk on various matters concerning ecology and environment. He is also an active participant in the multifarious activities of International Commission on Irrigation and Drainage, Confederation of Indian Industries, Central Board of Irrigation and Power, and Indian Geographical Committee of International Water Resources Association.

A leader even in the domain of Engineering, Sabarna is one of the winners of the Champions of Change 2020 Award given out by the Interactive Forum on Indian Economy supported by Government of India. In addition, he is one of the recipients of Economic Times News Makers 2021; Top 10 Most Influential Business Leaders of 2021 given out by Business World and ANI; and Times Excellence Award 2021 in Indian Literature given out by the Times Group.