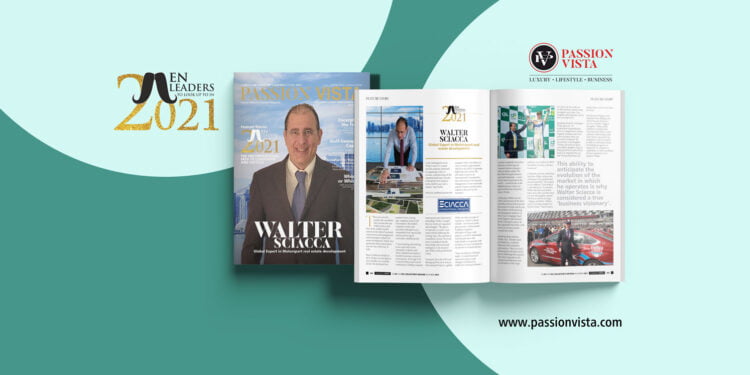 There are very few people who can follow their dreams the way Walter Sciacca did. One of the world’s top five experts in the field of racetrack construction and management, and motorsport-related real estate development, Walter was passionate about motorsports since he was a little boy in Italy.

“I was studying and working at the same time in the automotive industry and when I finished my studies, I decided to pursue a career in motorsports. At the age of 19, I moved to Rome and started working for a leading company in the motorsports sector. When I was 25, I created my first company dedicated to organising events on circuits, computerising all the organisational steps, thereby creating the first company in the world to use such a system,” says Walter.

With his combined passion for motorsports and information technology, Walter changed the way events are organised and managed. “The goal is to innovate, to create a new trend without following the existing ones. The customer is considered a friend. The work team is considered family. Innovating with emotional intelligence is the mission,” says Walter of his professional vision.

At present, he is the CEO and Managing Director at Sciacca International Projects, a global company which specialises in very innovative giga-projects that have the ability to generate high financial returns. He also leads a team as an International Consultant for the construction, start-up and management of new racetracks and all commercial structures related to the activity of a racetrack.

With over three decades of experience, Walter’s clients include – investment funds, governments, multinational building companies, developers of large-scale projects, as well as individuals and entrepreneurs who individually or in groups wish to finance or carry out projects for private or commercial use.

“I am considered a visionary leader. I created dozens of innovative projects and changed established yet ineffective working methods. I created completely innovative business, marketing and communication strategies with excellent results. The fact that both governments and multinationals — some of the most important in the world — turned to me at the beginning was a source of great satisfaction and pride,” shares Walter.

In the past, Walter was the CEO and Director of the Enzo and Dino Ferrari International Racetrack of Imola, and he was the architect of the sporting and managerial relaunch of the circuit, bringing it back to the highest international levels. During his career, he has organised more than 1,500 events in various circuits around the world.

Speaking about passion, Walter says, “Passion must not blind you, it must be balanced with rationality and analysis. There are many professionals who have failed just by following their passion. The future depends on the compartmentalisation and sectorisation of the target audience, in a market in which the ability to evolve is the key to success.”

A dynamic yet busy individual, how does Walter balance the challenges in his professional and personal life? “This aspect is very difficult. I’d be lying if I said otherwise,” he answers. Walter has been married to Katia since 2003 and they have a 9-year-old daughter named Vittoria as well as two dogs – Maggie and Stella. Walter’s inner circle also includes his friend Giosue: “I have known him since we were kids, we are like brothers, always ready to support each other. Our daughters play together and it’s very exciting for us.”

Speaking about his challenges, Walter goes on: “As professional responsibilities grow, it is important to defuse negative emotions and never make decisions when you are overly emotional. My top priority is my daughter Vittoria. Recently we spent some father-daughter time in Disneyland Paris and in Paris itself. It is important for me that Vittoria feels that I am always there, even if I am often far away.”

Emotional intelligence and empathy when dealing with your team and customers are two of Walter’s biggest strengths. “Today, public relations is fundamental. You need to be able to create authentic relationships with real interest; you need to be empathetic, and you need to be able to understand others. Psychological aspects are important. In a dispute or negotiation, he who can defuse his own emotions ‘wins’,” explains Walter.

This ability to anticipate the evolution of the market in which he operates is why Walter Sciacca is considered a true ‘business visionary’.