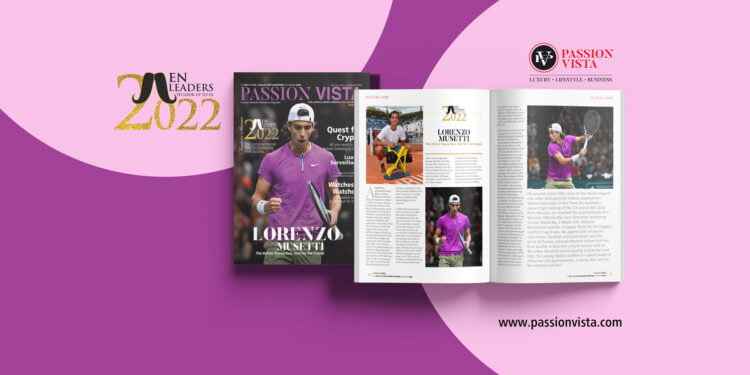 in Men Leaders to Look Upto 2022
Reading Time: 3 mins read
A A
Share on FacebookShare on Linkedin

The Italian Young Gun, One for the Future

A high-flying professional tennis player, Lorenzo Musetti hails from Italy and was born on March 3, 2002, in Carrara, Tuscany. Eyeing Roger Federer as his idol, he has achieved a career-high singles ATP ranking of World no. 23 achieved on 24 October 2022 and a doubles ranking of World No. 283 achieved on 2 May 2022 whilst also winning two ATP Tour singles titles. He has been ranked as high as World no.1, reaching the final of the 2018 US Open Boys’ singles and winning the 2019 Australian Open Boys’ title. With the onset of his professional career in 2019, he has claimed two titles on the ITF World Tennis Tour and two ATP Challenger titles. At the very young age of 4 years, Lorenzo Musetti started playing tennis and has been coached by Simone Tartarini since childhood. His father Francesco is a marble producer and his mother Sabrina happens to be a secretary.

A flamboyant young talent, Lorenzo is seen as a prolific shot-maker that brings a swashbuckling style to the court which wins a lot of fans. The young Italian is not all style and no substance as he has already recorded wins over the likes of Nishikori and Wawrinka, as well as against the leading world number 1 Novak Djokovic in the 4th round of the 2021 French open. Idolising the great Roger Federer seems to have rubbed off some inspiration onto his game as well. The use of his devilish one-handed backhand whilst being a brilliant shot-maker with an aggressive playing style helps him flick winners from anywhere on the court. Musetti carves the ball intricately and mixes it up with the pace using his slice-and-dice tactic, whilst also being able to rip the ball with marvellous topspin.

Considering his favourite surface to be clay, he feels natural and comfortable coming into the net as he is at the baseline, and his transition game moving forward is impressive as well. Lorenzo has had good success on hard courts in his career and has reached the semi-final of the 2021 Acapulco Open. In addition to his explosive power and arsenal full of weaponry, the Italian is also a great mover and is incredibly agile around the court.

July 2022 saw Lorenzo Musetti in great success as with grit and determination he reached the first ATP final of his career where he triumphed over Carlos Alcaraz in the final thereby winning his first ATP title and the first ATP 500 tournament. As a result, he climbed up the rankings to World no. 31 on 25 July 2022. Following his title win, he made his top-30 debut on 1 August, after winning his opening round at the Croatia Open. The emotions of lifting his maiden tour-level trophy will be a golden memory for Lorenzo, who overcame disrupted preparations and survived a rollercoaster ride at the ATP 500 event in Hamburg. Having lost his last six matches on the tour, the Italian arrived at the German port city without his back of rackets. “I arrived here… with all the strikes, one of my luggage (bags) got lost. (It was) the one with the rackets, so I was a little bit worried about how I would play,” Musetti told the ATP Tour after his victory. Although he managed to sort out his playing gear in time for the tournament, he then suffered a bout of food poisoning. He shared “the night before the start of the matches, I threw up all night. I had food poisoning, so I felt a little bit sick. I didn’t expect to go as far as I went, so I’m happy that my luck turned around at this tournament.”

His second career title came at the Tennis Napoli Cup after defeating his fellow countryman Matteo Berrettini in the final. He reached a career-high ranking of No. 23 and at the 2022 Paris Masters, he reached the quarterfinals of a Masters 1000 for the very first time defeating former World No. 3 Marin Cilic, Nikoloz Basilashvili and No. 4 Casper Ruud for his biggest and first top-5 win. An appreciator of classic rock music, football and basketball, and the great Al Pacino, Lorenzo Musetti claims that his best quality is that he’s a hard worker and on the other hand his worst quality is that he’s too lazy. The young Italian stallion is a great build of character and performance, a rising star, one to be watched out for!