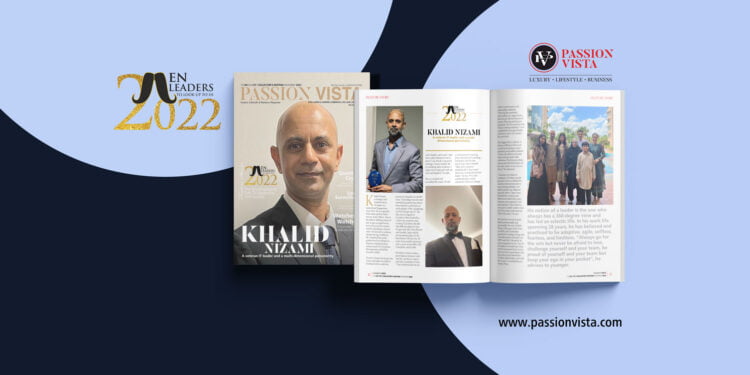 in Men Leaders to Look Upto 2022
Reading Time: 4 mins read
A A
Share on FacebookShare on Linkedin

A veteran IT leader and a multi-dimensional personality

Khalid Nizami, a strategic and transformative IT leader, is a naturalized Singaporean since 2013. He is originally from India and his father was an Army Officer. Due to his father’s shifting nature of job, he got an opportunity to travel across the country and do schooling in diverse cities. He learned to embrace change during childhood. He completed his under graduation from Bhopal in Business Administration and pursued PGD in Systems Management and did his Executive MBA.

Nizami’s dream was to get into Army and follow his father’s footsteps but he could not pursue for long due to a health issue. Technology was new and snowballing and he has always been intuitive and always an early adopter. After completing his PGD, he got into IT. The idea was to migrate to Canada or New Zealand as these two countries were inviting Tech talent. But life had different plans for him. He got a job offer from Procter and Gamble, India and he put his abroad plans on the back burner. He has over 28 years of successful experience and a career across P&G, HP, Caterpillar, and Ecolab.

He believes that to strike a great balance between work and life, one has to respect and take ownership of time. “I have blocked time for my work, family, and myself. I also have a daily blackout from 11 pm to 7 am which is meant for recharge. I lead a healthy life by including daily workouts. I make time to play golf with my wife and daughter,” he adds.

He is a certified and accredited life coach. He did a certification in coaching from International Coaching Federation and the idea was to learn about himself. “After self-evaluation methodically, I discovered that I am a wonderful servant leader,” he says. He is also a philanthropist and he constantly thinks of a design with transformative and sustainable solutions.
“During the pandemic, fortunately, my organization did not get affected because it is into cleaning and hygiene products. On the personal side, while working remotely, I have established some good habits and these came very handy,” he answered.

His biggest flex is that he is always willing to learn and evolve by keeping an open mindset and positive attitude. “I have the ability to handle stress and pressure with calmness. Nothing can shake me up and this has helped me to reach closer to my success story,” he expresses.

“I do have my share of weakness. At times, people perceive me as a subdued or uninterested person due to my calming attitude. So I had to justify my behavior towards them. I have been behind the curtains and delivered results but it goes unseen, unrecognized, and unrewarded. Thus I believe, you got to subtly market what you have done and achieved. Don’t shy away,” he says.

He has won several awards both professionally and personally. He won ‘Global Project Manager of the Year’ in 1999, and Leadership awards for leading change and Transformation Initiatives in 2009 and 2015. Recently, he was recognized as the ‘Top 30 IT leaders in South East Asia’. On the personal front, he has been an active sportsman and has won several awards for Cricket, Badminton, and Golf. He is also a Certified Rescue Scuba Diver.

‘His notion of a leader is one who always has a 360-degree view and led an eclectic life. In his work life spanning 28 years, he has believed and practiced to be adaptive, agile, selfless, fearless, and limitless. “Always go for the win but never be afraid to lose, challenge yourself and your team, be proud of yourself and your team but keep your ego in your pocket,” he advises to younger generations’. He further adds, “When you lead, at times, you have to lead from the front, then by being part of the team and sometimes by staying back or by staying away.”

“One of my professors during my Post Graduation days taught up a great life and leadership lesson which has become my life mantra. Rolling stones seldom catch moss so my mantra for growth, development, and success is to keep rolling, evolving, learning, practice this process consistently, every day and results will come to you. Another lesson which stayed with me is that always choose quality over quantity,” he says.

In his concluding thoughts, he said, “The world today is changing rapidly. We use the ways and practices of yesterday. Don’t be scared of learning new skills and new ways. DVUCA is here (Dispurtion, Volatility, Uncertainty, Complexity, Ambiguity) and if you are not ahead of what is going to happen, you may lose track. You need to be prepared or expect the unexpected which will set you up for greater success.”