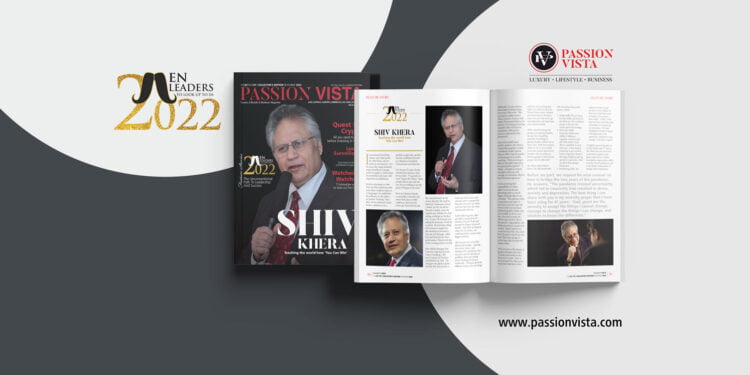 in Men Leaders to Look Upto 2022
Reading Time: 5 mins read
A A
Share on FacebookShare on Linkedin

Teaching the world how ‘You Can Win’

International Bestselling Author and India’s pride, Mr. Shiv Khera, doesn’t need any introduction. He’s the man who single-handedly inspired millions of people across the globe to realise their true potential and create a life of growth and fulfillment.

With his first book in 1998 – You Can Win (which has sold more than 4 million copies in 21 languages), he established his authority on the subject of ‘positive thinking’. Since then, he has authored 5 more books, continues to be a globally sought after speaker, and has established himself as a Business Consultant, Entrepreneur and Educator.

For the past 35 years, he has refused more business than he has taken. “I’m grateful to God,” begins Mr. Khera: “Most people want to succeed, but very few are willing to pay the price to Prepare to Succeed.”

Born in a business family, a young Shiv inherited coal mines with close to 1000 employees. But soon the mines got Nationalized and Shiv found himself on the streets, literally. He tried his hands at 3 businesses, but all 3 failed. In 1975, he left for Toronto, Canada, where he washed cars, did door-to-door selling, and slept on the floor for 1.5 years. He then got into selling life insurance totally by accident.  He feels that selling Life insurance taught him the meaning of persistence. One day, his Manager called him and fired him for Non- performance. That proved one of the turning points in his life.

Shiv told his Manager that I am not a educated person, I have a handicap. I did my B.Com in 3rd Division and failed in my 10th.  The manager was quick to point out that Shiv did not have a handicap but he had a bad attitude and it is people like him who not only ruin their own lives but they also ruin their family’s life too.

In the following days, Shiv attended a program by Dr. Norman Vincent Peale and learned the biggest lesson of his life – that while he blamed others for his failure, not realizing that he was his own biggest problem.

This became the core of Mr. Khera’s philosophy – making the correct choice, and dealing with it positively. For success is not the absence of problems, but overcoming them. Quoting his famous trademark – ‘Winners don’t do different things, they do things differently’, he says winners form habits of doing things losers don’t like to do. “They say practice makes perfect. That is not true. Practice only makes Permanent whatever we practice. If you keep practicing mistakes, they will become permanent. Only perfect practice makes perfection permanent.”

One of the world’s most prolific speakers, Mr. Khera’s Leadership program is widely considered a better tutorial than an MBA. Equally popular are his programs on public speaking.  What according to him are the skills required to be a good public speaker?  “3 things – strength of content, strength of delivery, and courage of conviction, which is hard but most important.”

As for parenting (he’s a grandfather to 2 boys aged 13 and 16), he says parenting today is a much bigger challenge than it was yesterday. “The exposure today is enormous and nasty. In our times, you had to go out of your way to access liquor and pornography. Today, turn your mobile on; it’s in your face. You have to make the effort to get rid of it. This is the parents’ responsibility who think parenting is a popularity contest. Today’s parents are scared of their kids. They don’t have the guts to say No to their kids .They keep saying Yes in the hope that the kids will respect them.

What is worse is the change in people’s attitude and values. “Parents and teachers today focus on to words – How to Succeed and Win. They never teach their kids how to Fail and Lose, not realizing that failure is a reality to all of us. When failure comes, students don’t know how to handle it hence they give into stress, go into depression and sometimes even commit suicide.

With a speed of change the products are getting obsolete, the day they are getting launched. Knowledge is getting obsolete within two to three years. With this scenario, either we are in deep trouble or we have a great opportunity for those who are prepared. But the question is how do you prepare for the unknown?

Mr. Khera opines that in future, the only people who will succeed are those who master 3 skills:

A highly respected Speaker at Events, Radio and TV shows, Mr. Khera has also launched a movement against caste-based reservation in India, founded an organization called Country First Foundation, and is the Brand Ambassador of Round Table Foundation.

Before we part, we request his wise counsel on how to bridge the two years of the pandemic. He answers, “The pandemic created uncertainty, which led to insecurity that resulted in stress, anxiety and depression. The best thing I can share with you is my serenity prayer that I have been using for 47 years – ‘God, grant me the serenity to accept the things I cannot change, courage to change the things I can change, and wisdom to know the difference.”