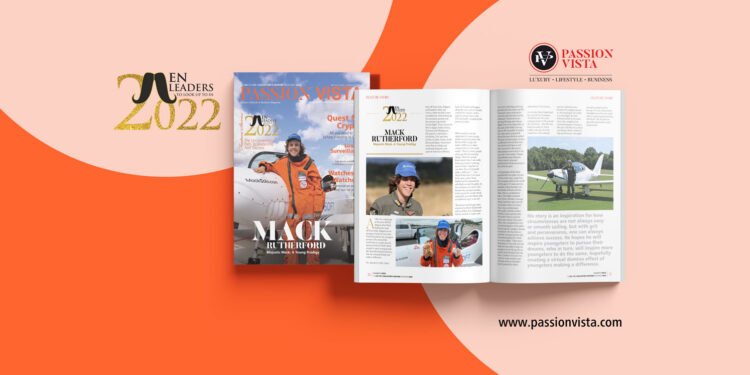 in Men Leaders to Look Upto 2022
Reading Time: 3 mins read
A A
Share on FacebookShare on Linkedin

At the very young age of 16 years, British-Belgian pilot Mack Rutherford took off from Sofia, Bulgaria in an attempt to beat the Guinness World Record for the youngest person to fly around the world solo in a small aircraft. Sponsored by ICDSoft, Mack wanted to meet young people like himself along his journey, who do amazing things and make a difference.

On  March 23, 2022, Mack took off from Sofia, Bulgaria and headed to Italy and Greece, where he had a more extended stay while obtaining the necessary permits and documents required for further flight. From Greece, he flew to Egypt, Sudan, Kenya, Tanzania and Madagascar. His journey continued to Seychelles, UAE and then further to India, China, South Korea and Japan. From there on he flew to Alaska and continued along the west coast of America to Mexico. Later, he headed north again along the east coast to Canada, crossed the Atlantic, took a stop in Iceland, then in the UK and finally wrapped up his journey in Sofia.

Mack wanted to use the opportunity to meet young people around the globe who do incredible things and make a difference in their communities or even in the world. “There are many people of my age who do amazing things. Often few people know about them. I am really looking forward to meeting some of them. Together we can show that young people make a difference.” – says Mack Rutherford. Ever since he became a pilot, Mack Rutherford has planned his solo flight around the globe. In the meantime, his sister Zara became the youngest woman to fly around the world, which essentially provided Mack with an additional spur to set off!

The journey took longer than expected for Mack Rutherford and was filled with challenges that he needed to resolve one at a time including recurring permit and visa issues and the monsoon rains soaking his aircraft and some documents onboard. Technical issues during the long and tedious flight were of no help either as his auto-pilot failed, forcing him to fly manually. In Sudan, his solar panel system fell down because the heat melted the glue maintaining it in place combined with extreme haze. An electrical failure as well was reported in the system that pumps reserve fuel to the aircraft’s main tanks. Despite all problems and obstacles Mack stayed calm and professional whilst focusing on his ultimate goal.

In September 2020, Mack qualified for his pilot’s license, which at the time, made him the youngest pilot in the world at the age of 15 years and two months. Mack has flown for hundreds of hours with his dad, who is a professional pilot. The flights included two Trans-Atlantic crossings. Mack was born into a family of aviators where his father Sam, was a professional ferry pilot, and his mother Beatrice was a private pilot. His sister Zara is a private pilot, too, and on 20 January 2022, she completed her own circumnavigation of the globe, becoming the youngest woman in history who has done so and the youngest person who circumnavigated the world in a microlight. “I have been fortunate to have had a family that has been able to help me progress in my flying. But no matter what background you have, I believe it is never too early to work towards your dreams and you shouldn’t limit yourself by others’ expectations” he exclaims. As of today, Mack Rutherford has claimed two Guinness World Records. He is the youngest person to fly around the world solo – this title was held previously by Travis Ludlow who was 18 at the completion of his attempt last year. Mack has also become the youngest person to circumnavigate the world in a microlight, the title held previously by his sister Zara, who completed her circumnavigation in January this year. Just like Zara, Mack was flying a Shark, which is a high-performance ultralight aircraft manufactured in Europe. It is one of the fastest ultralight aircraft in the world with a cruising speed reaching 300 km/h. The aircraft was specially prepared for such a long journey. His story is an inspiration for how circumstances are not always easy or smooth sailing, but with grit and perseverance, one can always achieve success. He hopes he will inspire youngsters to pursue their dreams, who in turn, will inspire more youngsters to do the same, hopefully creating a virtual domino effect of youngsters making a difference