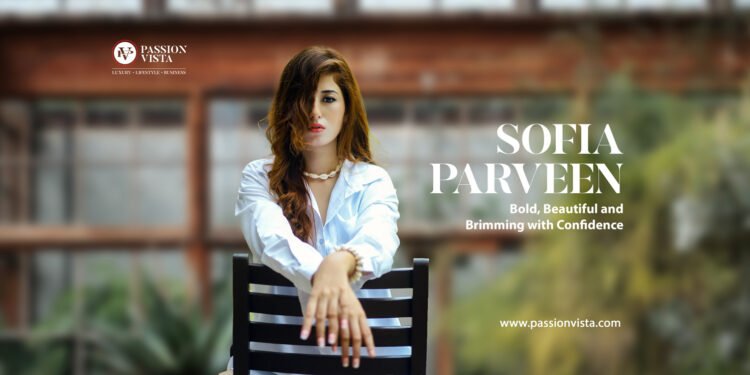 Bold, Beautiful and Brimming with Confidence

“There’s no ‘Godfather’ in the industry, you have to become your own ‘Godfather’ only that’ll help.” remarks the ever so versatile Sofia Parveen who has carved a niche for herself in the acting industry. She has adorned multiple hats in her life including dancer, actor, theatre performer, modelling and brilliant entertainer.

She has won multiple awards through the 5 years of acting in public theatres and even made her acting presentation with T-Series. She has been in 6-7 music recordings, TV advertisements, notable fashion shows, worldwide brand ads, and International Calendar shoots in Dubai, and will now be seen in South Indian movies.

Born in Durgapur in West Bengal and subsequently raised in Jamshedpur, Sofia is a native of Amritsar and has now moved to Mumbai. From an early age, she used to love participating in dance competitions and also learning new dance forms. Her mom always encouraged her dancing skills and even took her to fancy dress competitions. In college, she got into modelling and even joined the theatre where she took acting lessons.

She recounts “The fact that in theatre an actor stands bare, performing live in front of an audience, makes it the toughest form of acting as it comes without retakes! I’ve given five years to the theatre, learnt acting, have done plays, done background singing in some of the plays, danced, wrote skits and street plays and won the award as the best writer on a national level! Yeah, there was also a writer in me and surprisingly it showed up and got appreciated!”

Sofia’s remarkable achievements include having won the seventh “International Women Empowerment Award” on the event of International Women’s Day, introduced by the renowned Bollywood director Mr Abhishek Dudhia (who directed Ajay Devgn’s film “Bhuj”) for her incredible accomplishments in displaying, acting, society, and representing women as well as animal’s rights and welfare. She is also a notable Mumbai social dissident who vouches for Women’s Rights. Most recently, she was on a jury for the International Beauty Pageant in Dubai.

When it comes to facing challenges she says “As I come from a very simple family, my dad and brother were extremely overprotective of me. To them I was a fragile little girl, they thought people will take my advantage, they didn’t want me to take such a big decision of switching cities to take my modelling career forward there was only my mom and my sister who supported me leaving home was a very big decision for me.”

Due to this, she had to face a difficult first year in the industry after moving to Mumbai since she didn’t know anybody. There were many bouts of disappointments, challenges and struggles but she conquered them all with her stern resolve and life motto of ‘Do or Die’. Now she is happily living with her mother and sister whose support has made her the person she is now. She feels that the proud smile on their faces is more precious than any trophy or medal.

About fostering her relationship with her colleagues she says, “I feel being humble and sweet which is the key to flourish. A deep relationship of love whether it’s with your colleagues or your family or anyone, if you are sweet and humble anyone would love to stay connected with you and that’s what I do!”

Always following her passion wholeheartedly, Sofia says, “My passion for my work motivates me to get close to my purpose, my haters who want to turn me down, and my family fuels me up to drive each day to pursue my goals!”