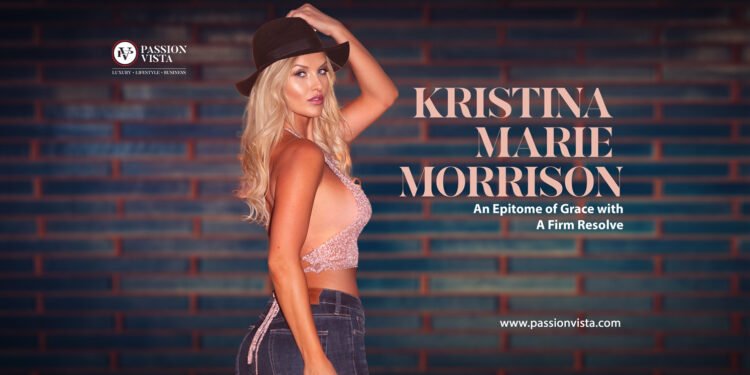 An Epitome of Grace with A Firm Resolve

Born and raised in Southern California, Kristina Marie Morrison has always wanted to be an actress and model for as long as she can remember. Her first outing in the spotlight as a competitive cheerleader and gymnast in High School, as well as a titleholder for several city Teen and Miss Beauty pageants. During that period as a titleholder, she was instrumental in raising over $30,000 for the American Cancer Society through volunteering for The Relay for Life which is a cancer awareness platform.

She continued her journey in the pageant competition realm and competed at the state level for the Miss California USA title and was named one of the Miss Toyota Grand Prix of Long Beach winners in 2012. She was part of the champagne celebration on the podium in the Grand Prix Winner’s Circle which was televised all over the world. Her images on the podium were printed in the newspaper which is a moment she felt spellbound.

As for her education, she graduated from California State University, Long Beach where she majored in Communication Studies. She has been featured in many internationally published magazines like Moevir Magazine, GQ and Voyage LA. In January, she was on the front cover of Factory Magazine. The diligent and breathtakingly beautiful agency-signed model and actress, has even appeared in many music videos of different genres including the super hit song by Tyga called ‘Ibiza’.

Kristina has acted in loads of commercials as well with the Atlantis casino being the most recent. She is also a runway model and walked the runway for fashion designers during LA Fashion Week and San Diego Swim Week. For the past three years, she has begun content creation for many fashions, beauty, swimwear and lifestyle brands that she displays on her social media handles. She proudly works with brands that she genuinely believes in and has worked with over 35 brands.

Being in this tough industry hasn’t been a smooth sail, since she had to face huge waves during her career. After working with many agencies she realized that not all of them would work in her favor which has made her mentally and emotionally strong to climb uphill through any situation. When she first auditioned for LA Fashion Week, she was told to lose 20 pounds or gain 20 pounds to be considered ‘plus size’ when she already had a healthy weight.

Kristina struggled with body image issues when she was younger and even at the age of 18 was mentally so strong that the statement by the casting director did not bother her. She resolved to believe in herself and gives the advice of ‘always loving yourself no matter what’. She says “Everyone’s body is different. Some people are healthy at a size 2 and some people are healthy at a size 12. Life is too short to spend it obsessively counting calories or spending every waking minute on the treadmill.”

She has stuck to her goal and with her dedication, she works extensively which has allowed her to travel the globe doing what she loves. In the future, her goal is to model for Sports Illustrated Swimsuit and looking at her perseverance and never giving up attitude, she will be able to achieve that dream soon.