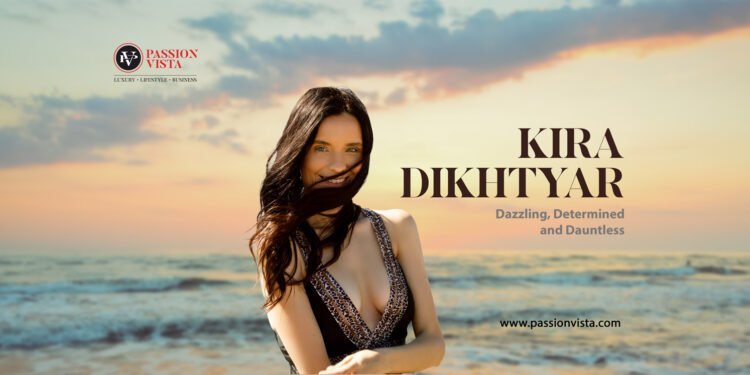 With over 1 million followers on her Instagram, Kira Dikhtyar is a well-recognized entity in the fashion industry not only due to her astoundingly gorgeous looks but also for her humanitarian work. She is a Russian supermodel, role model and actor who has worked in the industry for the past decade and has showcased her charisma and talent on the cover of 52 magazines worldwide.

Kira is working tirelessly to launch the Global Legal Age of Consent campaign with the United Nations which aims to raise awareness that even today, 64 countries and approximately 48% of the population live with the legal age of consent being lower than 14 years. She says “The ultimate goal of our campaign is to raise the current age of consent to 18 years old in countries around the world. There is a wealth of research that says this is the minimum age at which a person is psychologically developed enough to be making such a consequential decision.”

Her efforts have had a monumental consequence where the winds of change have made Russia alter the legal age of consent from 14 years. She is hopeful for more positive results, with countries like Spain, the Philippines and Austria raising the legal age.

She is also endeavouring to raise awareness about the abuse and sex trafficking suffered by minors. She remarks “It was my personal experience that inspired me to take an active stance against injustice. When the program started, I received 62,000 messages from girls who live in Russian-speaking countries over 13% of which were girls from Ukraine.”

Ever since a young age, Kira had dreamed of becoming a fashion model, though she was competing in rhythmic gymnastics and wanted to become a coach. While training, she was chosen by her team to pose for magazines and sporting brands. She was also on the Russian national team at the age of 13. A famous international scout saw her and advised her to try the modelling business abroad, explaining that there is not much scope in Russia.

She never gave it a thought before quitting competing in gymnastics. She says, “After that, I entered Moscow State University but then didn’t want to study. So, I tried modelling in Europe and I was pretty successful as a young girl. But the biggest success happened when I came to L.A. and met my manager. I’ve been collaborating with her for more than 10 years!”

Her biggest modelling career highlights have been many shoots like her first Vogue Italia shoot with Ellen Von Unwerth which was her favourite, Bruce Weber for Abercrombie & Fitch, appearing in Playboy U.S.A., doing the TV show The Face and appearing on numerous international magazine covers. She hopes that her monumental achievements are still around the corner.

Recently she participated in the reality show ‘The Face’ which she felt was very demanding in terms of psychology as she had to prove herself at each turn. She later launched her own show called ‘Model Moms’ which she created by pooling her experience from the previous show she participated in. She states “And yet, I think that the era of reality shows is coming to an end, it’s time to come up with something new.”

About her favourite destination to travel to, Kira says “Los Angeles because I can combine work and other activities, like going to the beach, and hiking, and there is always so much going on there. The weather is great too, it’s practically summer all year round. And, of course, I have lots of friends who live in L.A., so there are many memories! So, if I had to choose my next trip I’m definitely going back to Cali.”