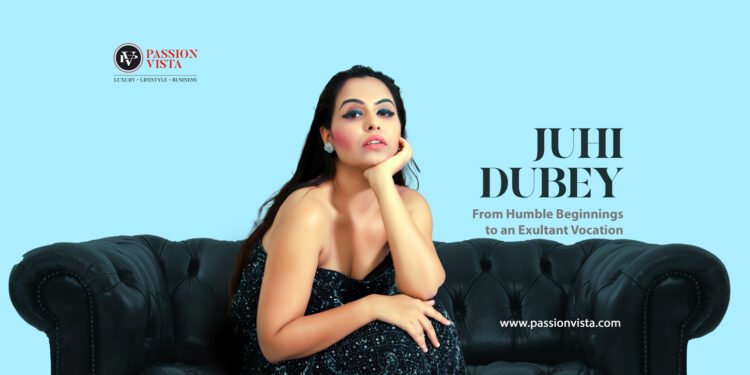 From Humble Beginnings to an Exultant Vocation

Born under humble circumstances in a lower middle-class family in Ahmedabad, Gujarat, Juhi Dubey has come a long way to nourish and nurture herself and her professional career as far as she could. She achieved her education at a no-frills school and thought about quitting engineering eventually when she realised how she won’t excel in it. Later in life, she opted for graduation in Political Science but due to a financial crisis in her family, she started working as a promoter with a menial pay of 300 rupees a day. She claims that the field was full of rejection and selective appraisals and could have been due to reason of her being born with a brown complexion and ‘not very sharp features.’ Burdened financially, she was left with the last resort of slowly working from a promoter to a showpiece for some random businessmen.

Later, a friend of hers suggested she starts anchoring as she could speak well. A lack of appreciation always kept mounting on her and people kept hitting her with negative remarks to make her realise that her job wasn’t ‘permanent’ or ‘promising’. An emotionally drained and suppressed sole, her relationships never seemed to work. An epiphany hit her after working for 6 months at a job that she didn’t care much about and only then she had realised her love for communicating with people. She believed she possessed the power to speak and communicate well with others and wanted to cash in on her strengths.

People often perceive an emcee as someone who is in the industry of entertainment and hosts events for the same, but despite being in the ‘entertainment’ industry, Juhi finds liberty in the fact that she is well versed with current affairs and politically well-updated about all the ongoing issues in the country and globally as well. It has always been a rocky road for her and clients even now keep doubting her and pressurising her by asking if she is capable enough to deliver the task asked of her. It is a different matter altogether when weddings are being organised but corporates are very conscious of how well everything is organised. She exclaims “we are not the main character of any shoe but without us, a show cannot be done.” Juhi believes that she is driven by the mindset of being proactive in nature in her daily life. She has a habit to learn and adapt each day and has multiple passions as well. She is a certified yoga teacher, loves to learn and do makeup, discuss politics, write on various topics, and talk about gender equality and rights for women. She also possesses a deep love for fashion and is working as an influencer as well. She believes that life is so interesting and full of opportunities, a person can choose to “either waste it or make it.”

Juhi believes the feeling of loving and being loved is beautiful and makes one feel young and alive. She holds immense respect for love and relationships in one’s life. Ayurveda is a field that holds interest in her mind and would love to learn more facts about it, because of the fact that she knows about the healing power of Ayurveda. She leaves a strong message for the youth and claims that one must never forget his or her roots, and must always try to contribute towards it no matter how large or small the scale of it. She has hosted more than 800 live shows including government events like Festa De Diu, Aroicion etc and for big corporates, namely BMW, Volvo, Skoda, Polycab, Indusind Bank, Central Bank etc and also hosted some big fat Indian weddings. Along the line, she interacted with several personalities such as MP D.Y. Patil, Ankit Tiwari, Shahid Kapoor, IPS Vikas Vaibhav etc.