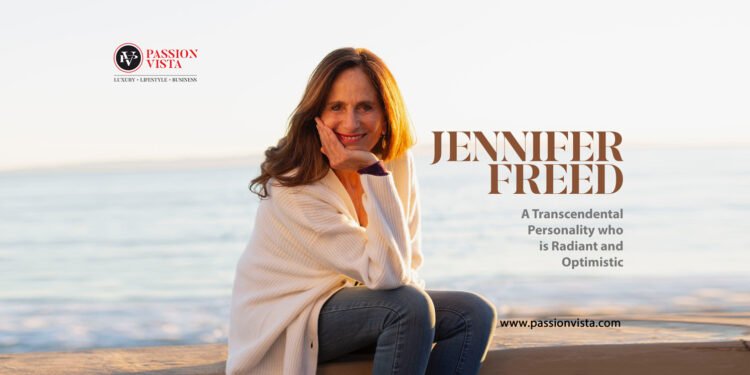 A Transcendental Personality who is Radiant and Optimistic

“For me, psychology is the study of the soul, and astrology provides a map for the soul. Yet I firmly believe that each person with proper guidance and an enduring commitment can find the divine of their own knowledge and apply their inner wisdom to having a fully expressed and contributory life.” says the peerless Jennifer Freed who is a psychological astrologer, best selling author and a lifelong educator in social and emotional wellbeing. Her new book A Map to Your Soul came out on October 4, 2022, and is available for digital and audio download at the same time.

Hailing from New York City, Jennifer’s dad was a Broadway actor and her mother was a public relations consultant. The family moved to Los Angeles for her father to pursue acting in Hollywood. She found herself inclined and fascinated by astrology from a young age even though no one in her circle was interested in it. A life-changing experience occurred for her when at the age of 19 years old, she consulted with an astrologer named Alvina Manning.

Alvina read her charts which had a profound impact on her life and led her to understand herself better. She felt that her path of life was ignited and became increasingly obsessed with learning about astrology. She started studying psychology and got a master’s degree in the same whilst reading hundreds of books related to astrology.

In her 30s, she established astrological counselling seminars with a group of friends. It became a training centre for people who wanted to study astrology and learn from people all over the world.

Jennifer states “ Eventually, I earned my PhD in psychology and was also certified by ISAR as an astrologer. I also became a national trauma consultant in EMDR and worked with hundreds of clients to process their pain, and transform it into a profound resilience.”

She fused her two specialties and started working with people as a psychological astrologer. She says “This meant using their birth charts to understand their obstacles and strengths, and to help them enhance their talents and work through their problems with my psychological tools and understanding.”

In 1999, she and her partner Randy initiated a nonprofit to educate teens’ parents and teachers on how to have healthy relationships. They also facilitated a staff that conducted training on social and emotional development that bought people from a multitude of demographics together.

Jennifer proudly exclaims “We have spent the last 23 years engaging thousands of teens in an exploration of all the joyful and creative ways young people and adults can learn to lower prejudice, manage emotions, increase social awareness, and make meaningful contributions to their communities.”

Being a revered practising psychotherapist, she understood the innate workings of couples, individuals and families. As an astrologer, she was able to grasp the complex patterns of an individual’s psyche and discover to decipher the map of their soul.

For her the true core of her essence which she calls her ‘sacred crew’ is her loving partner, family, colleagues, and friends who have always led her to be productive and inspired. Whether it is working with disenfranchised and oppressed youth or famous celebrities, she feels equally honoured to guide people to recognize their sacred gifts and to live in gratitude instead of limitation.