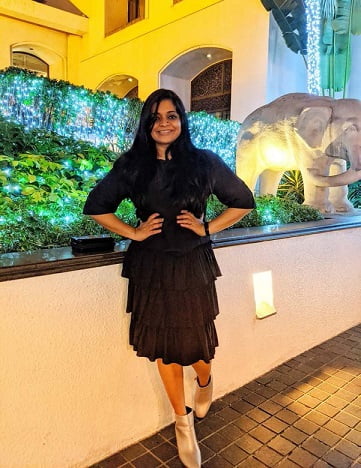 Three things that I learned from Ekta Kapoor; I will cherish for life…

Passion is energy, and if given a focus, it can take you to the professional world. How did your passion find a way to Balaji films?

I do not come from a showbiz background nor had a clue about this industry. The media just happened to me by fluke. During my college in Pune, I ended up doing a channel job, and it intrigued me so much that I stood first in college. Thereafter, I worked with the music industry when a friend introduced me to Ekta referring as Jeetendra’s daughter. Honestly, I got no clue who she was as I was a bit finicky doing work for serials and television, but my friend encouraged me. I had to join and work extensively for what I had no clue in no time, which later turned into an obsession. Ekta Kapoor was an inspiration as she was just a little elder to me and the way she executed at that age drove me to work harder. Her passion pushed my passion more. It has been 15 years of journey…

Tell us your secret of surviving with perfectionist Ekta Kapoor.

Indeed, she is a perfectionist, and she seeks the same from her team as well. Ekta and I were young girls when I had joined her. She had temper issues towards her work as she demanded things to be correctly done which resulted in some people working hardly for a month with her. However, my learning attitude kept me glued to her. I had much to learn from her, which kept me going for 15 years with her.

The three things that you learned from Ekta Kapoor.

The first hit to my list was Story Telling, which is truly a form of art. It captures the very essence of the creation of writing, editing, continuity, direction, characters, and performance. She was always loaded with ideas and immediately converted the same into soaps in her style, which I think is amazing.

Secondly, she has a passion for keeping an eye on what others are doing so as to make it a continuous learning for them. Balaji was a training school where everyone could do what they wanted to do, which, unfortunately, other producers did not allow. Ekta Kapoor used to brief us about her vision, which we could envision accordingly. So, to put in words, the third thing I learned from her was the freedom to make your mistakes and learn from them. I gave the same freedom to my subordinates and owned their mistakes in front of Ekta.

Balaji telefilms brought Indian fashion and traditions like Saree, Mangalsutra, and Sindoor back in the limelight and made it popular worldwide. What’s your take on it?

Fashion has always been my interest from childhood. I believe it is not limited to high-end brands and following the trends rather than being more comfortable with what you wear and confidently flaunt the same. I remember I was called a little Bohemian in Balaji back then. When we created kamolika’s bindi, sarees and other dressing stuff, we had a particular vision in mind, and the same became a trend among the women. We remember people asking for stuff refereeing to these characters; so yes, aesthetically, fashion plays a huge part in many TV serials.

There were lots of #metoomovement buzz, where one woman’s voice can change the world. What would you say regarding Bollywood, is it to play nice and leave, or one should come out with it?

The problem with India is nobody is well educated with such concepts, but people follow such social media trends blindly. Indian industry is not very open to such things. People are not aware that a casual pat on the backside or a casual hug can also be categorized as #metoo or some physical abuse. But we are not educated to that level; we think that if something extreme happens, it is #metoo.

Favourite actors in Bollywood?
The list is long but to name few – Hrithik Roshan, Ranbir Singh, Amir Khan and Irfaan Khan.
Three favourite actresses in Bollywood?
Alia Bhatt and Dipika Padukone; and with new ones, there are quite a few, one of my favourites is Bhoomi Pednekar.
Favourite Balaji character?
Mr Bajaj
Which wish left to be fulfilled?
A wish of making a feature film