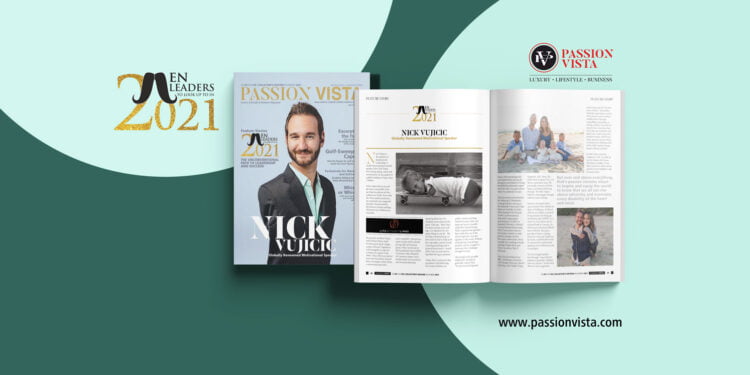 Nick Vujicic is the epitome of Inspirational Leadership. A world-renowned motivational speaker, New York Times best-selling author, coach and entrepreneur, he has spoken to a global audience of more than 2 billion.

What makes his success all the more remarkable is the fact that he achieves all this without any limbs. Born with the Tetra-amelia syndrome, an extremely rare congenital disorder characterised by the absence of arms and legs, Nick grew up in Melbourne, Australia.

His parents are Boris Vujicic and Dushka Vujicic, both of whom grew up in refugee camps of former Yugoslavia, and managed to escape the Communist regime in the 1960s. When Nick was sixteen years old, his mother showed him a newspaper article about a woman praying with a severe disability. That picture spoke to him and he started giving talks at his prayer group. When he turned 21, Nick graduated from Griffith University with a Bachelor of Commerce degree and a double major in accountancy and financial planning.

Speaking about how his disability never thwarted his goals, Nick says, “More than the desire to have arms and legs, I am thankful for two major things in my life – The fact that a human being can have faith in God to help us do the impossible, and the beauty of having knowledge that is gleaned from history. I would rather have no arms and no legs than having no purpose.”

Today, Nick is testimony that persistence and embracing the lessons of failure can achieve almost anything. With his humor, faith, and deep and sincere empathy with other human beings, Nick’s inspirational speeches have made him one of the most sought-after keynote speakers in the world. Millions of people have found hope, purpose and the strength to overcome their challenges through his story.

This would not be possible without the ‘attitude of gratitude’, opines Nick. “In extreme and desperate times, both psychologically and emotionally, having the discipline and lifestyle of being thankful has definitely helped me to be who I am and achieve what I’ve achieved,” he says.

Nick has much to be thankful for: Meeting 21 Presidents; writing 6 books; starring in the Butterfly Circus short film that’s on YouTube. In 2002, Nick founded ‘Life Without Limbs’, an international non-profit organisation and ministry. In 2005, he founded ‘Attitude is Altitude’, a Social Emotional Learning (SEL) Curriculum wherein he teaches students to make positive changes in their lives and communities. Most recently, he’s working towards starting ‘Prolife Bank and Trust’ as well as ‘Nick V Network’.

However, his rapid ride to success hasn’t been without its share of challenges. In March 2019, he was falsely accused of firing someone for being gay and labeled anti-LGBTQ. As a result, he was kicked out of a national bank in America. In what became the most difficult time of his life, Nick got a grenade at home, a spying drone for a day and a half over his home, and $300,000 worth of contracts for motivational speaking were withdrawn with no apologies.

Yet, his strengths pulled him through, “especially the attitude of gratitude, imbibed from my parents,” recalls Nick. This time also taught him some lessons for life. He lists some of them: “Remember, obstacles equal opportunities. Also, process your emotions, whether that’s through counselling, journaling, or calling a friend. If you do not process your emotions, they will come up eventually and hijack you. Lastly, keep your priorities intact. And always make sure you nurture these six factors for a full potential of life: faith, family, friends, finance, fitness, and fun.”

In 2007, Nick moved to California, USA. In 2009, he met his future wife Kanae Miyahara in Dallas, Texas. They married in 2012 and are parents to two daughters and two sons today.

But over and above everything, Nick’s passion remains intact – to inspire and equip the world to know that we all can rise above adversity and overcome every disability of the heart and mind.