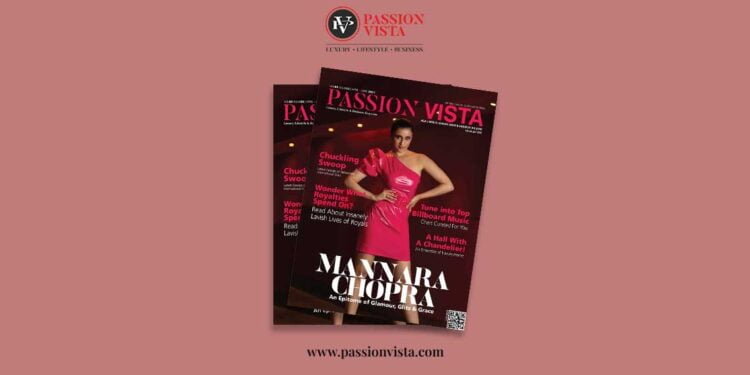 in Cover story
Reading Time: 4 mins read
A A
Share on FacebookShare on Linkedin

An epitome of Glamour, Glitz & Grace

Always enamoured of dancing since childhood, Mannara Chopra’s family wasn’t surprised when dance and choreography became her profession. But they hadn’t anticipated that her journey would include performing on global stages, even before she officially entered the showbiz industry.

Over the years, Mannara has manifested that she is indeed “something that shines,” resonating with the Greek meaning of her name.

With a BBA degree, Mannara commenced her professional journey as a fashion stylist. Her training in various dance forms like belly-dancing, Odissi, and hip-hop ignited her feet to set the stage on fire every place she performed. Otherwise famously known as Barbie Handa, the dancing queen then decided to pursue her career in acting.

“Acting flows in our family. My parents told me to complete my studies first before choosing a profession,” she detailed about coming from the Chopra clan of sisters. Nonetheless, the industry does not run on just big names, one needs the talent to survive, and Mannara has not just endured but flourished since 2014.

Her mother, Kamini Chopra Handa, a jewellery designer, and real sister of Col Dr Ashok Chopra (father of Priyanka Chopra Jonas) and her father, a lawyer, always encouraged the tiny dreams in her eyes, fueling them to grow bigger with time. With the wings of her family’s support, including that of her sister, Mitali, who is now in the diamond and gold jewellery business, Mannara flew to Mumbai to fulfil her dreams. Her skills and beauty received tremendous appreciation, and her forty commercials are presentational proof of that.

Mannara has been starred with several big stars in these commercials, including Salman Khan, Farhan Akhtar, Imtiaz Ali, and her cousin, Priyanka Chopra, to name a few. She was the face for brands like Suzuki, Delux paints, Parle Marie, Pepsodent, IFFCO Tokyo, Subway, Indulekha Arkot Face pack, Nokia Lumia, Hero Bike, LG, and Myntra.com. The north-Indian beauty was the original face for the popular app Gaana.com. She featured in Amit Trivedi’s song for Gaana.com titled “Bas bajna chahiye Gaana.”

However, it was her work and presentation in the Dabur Amla Oil that won hearts in the South’s regional cinema. Her name spread like wildfire, and Mannara was soon on board for several Telugu films beginning with Prema Geema Jantha Nai, where she played the lead role. It opened her gateway to success in the movie industry.

In the same year, 2014, Mannara also bagged a debut in Bollywood, with the wellreceived movie, Zid with Anubhav Sinha Productions. It was her first-ever film in Bollywood, and she was already a favourite among the industry, thus winning the Best Female Debut award at the Lions Gold Awards in 2015.

Mannara also tried her hand at singing one of the songs from the movie titled Tu Zaroori, which became an instant hit on YouTube. With melodiousness in her bank of talents, she signed many roles in the southern films where she also sang in regional languages like Telugu and Kannada. Her attempt to entertain and showcase her singing talent is round-the-clock, and her social media posts are live examples of that.

From 2014 to 2021, there has been no stopping this doll, who has captivated people with her acting skills and gorgeousness. Her on-screen presence became a massive hit, making her the face of several offline events. Mannara was then featured in several other movies like Sandamarutham in Tamil (cameo role) and Kaaval in Tamil (special appearance).

Her role in the Telugu movie, Jakkanna, alongside hero Sunil Varma obtained much acclaim from the critics and audience. Mannara further acted as the lead in the Telugu movie Thikka, for which she won the respected Special Jury Award for Best Actress at the 15th Santosham Film Awards in 2017.

With an influential performance in the bilingual film Rogue in Kannada & Telugu, another Special Jury Award for Best Actress at the 16th Santosham Film Awards in 2018 was inevitable. Needless to say, her adeptness in acting and her on-screen presence is a consummate combination that enhances her personality’s magic.

Recently, in 2018, the shining star walked the ramp of the India Runway Week as the showstopper, dazzling the ramp and every watcher with her grace. In the same year, she also beautified her way at the Lakme Fashion Week. These are just two of the many fashion shows where her presence has had a killer impact on spectators. Her body language and the way she carries varied fashion attire are a perfect finish to the fashion designer’s inventiveness.

Besides this, she is also the star of three web series, two in Hindi and one in Telugu. One of her latest short films released in 2021 was showcased on Shilpa Shetty and Raj Kundra’s channel, Bollyfame. The dancer in Mannara stays alive when she gets to judge ambitious dancers on more than one dance shows airing on Gemini TV, Rangasthalam channel, to name a few.

Stardom is not easy to achieve, and preserving stardom is more complex. But Mannara is amongst the very few young stars who hasn’t just made a mark in Bollywood but in various other realms of the entertainment world, such as movies in Hindi, Telugu, Tamil, & Kannada, commercials, dance, and fashion events. But that isn’t all. Not everyone knows that Mannara is also an entrepreneur, running a line of diamond jewellery that she named BMB jewels.

Mannara is all praise about her internationally renowned sister, Priyanka Chopra, who she calls “an inspiration” for her and people around the world. Being an optimistic person, Mannara accepted the pandemic and the changes it brought with utmost positivity, knowing that the OTT platforms would help keep one’s creativity alive. In this regard, she says, “Entertainment must go on.”

The latest buzz by Mannara suggests her venturing on a new project in the entertainment industry leaving us with utter curiosity and excitement. Mannara’s indomitable spirit adds to her dazzling persona. To date, she has achieved, whatever she dreamt of. The glimpse of which we witnessed her lockdown routine where she invested her time in several online personalities and skill-building activities that helped her stay hopeful.

The audience cannot wait to watch Mannara again in her upcoming projects on the various OTT platforms. If there’s one thing for sure, it’s how she’ll continue to bewitch people digitally till we can finally see her on the big screen again.