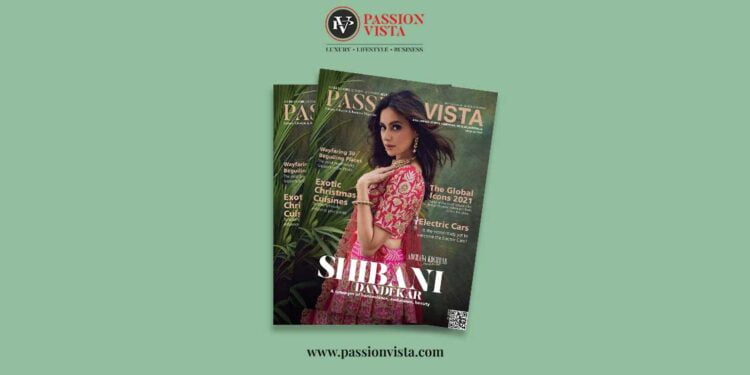 in Cover story
Reading Time: 3 mins read
A A
Share on FacebookShare on Linkedin

A synonym of benevolence, endurance, beauty

Always charmed by the world of glamour, the second daughter born in a Marathi- Chitpavan brahmin family began her career working in American television. Shibani Dandekar an Indian- Australian singer, actor, model, and anchor is known for her work predominantly in Indian cinema and television shows.

Born in Pune, Maharashtra Shibani spent most of her childhood shuttling from Australia, Africa, London, and New York. She was very interested in music and athletics, and she even founded D-Major, a girl band with her two sisters Anusha and Apeksha. She moved from Australia to New York after finishing her education and tried her hand at modelling and presenting, even initially hosted shows like Namaste America, V desi, and The Asian Variety Show. It was her impeccable hosting skills that provided her the opportunity to share the stage with king khan Sharukh Khan and hosted an evening with him, which provide her with much breakthrough and recognition amongst the Indian audience as well.

The actor moved back to India after and continued working for the television as a host, while proactively venturing into modelling as well. Shibani’s career in Indian television started with a triumph and she was seen hosting multiple shows like AXN’s Men 2.0, Style and the city, and Top Model India. Eradicating all the struggles, Shibani went up the ladder in no time. She also took part in leading reality shows like Khatron Ke Khiladi and Jhalak Dikhla Ja.

Shibani’s career in Indian television started with a triumph and she was seen hosting multiple shows like AXN’s Men 2.0, Style and the city, and Top Model India. Eradicating all the struggles, Shibani went up the ladder in no time. She also took part in leading reality shows like Khatron Ke Khiladi and Jhalak Dikhla Ja.

Walking to the set and standing before the camera for a shot gets Shibani’s heart racing, but more with enthusiasm and less with nervousness. Her unprecedented hard work and perseverance paid off when she started co-hosting the most-watched Cricket Premier League, IPL in 2011 for 5 consecutive years. Apart from this she also hosted the ICC Cricket world cup in 2019.

Creating a place in the acting world isn’t an easy task. Shibani, too, sacrificed a lot of comfort, money, and relationships to be where she wanted to be. Her quest to be better in everything gave her the confidence to keep going. Consequently, she did her first appearance in Ravi Jadhav’s Marathi film Timepass in 2014 following up with her Bollywood debut with the romantic-thriller film Roy in 2015.

Setbacks are a part of life. There comes one point when we are at the weakest point in life and deserve a warm pat on our back to what we have been through. But the phase came and go into Dandekar’s life like a wind blow, the actor didn’t fear the hardships and challenges. The unhesitant actor has proved her worth in the industry by grabbing every good opportunity she seeks and today she is counted amongst the leading hosts and models in the industry.

Apart from her career Shibani have also been highly followed by netizen for her gushy love towards her long-time boyfriend Farhan Akhtar who she recently got hitched to. Bollywood’s famous personalities Farhan Akhtar and Shibani Dandekar first met on the sets of a television show. The work-related meeting turned into a deep love, and the relationship rumours made headlines when Shibani posted a picture on social media for the first time. The couple made headlines from time to time but they didn’t reveal much until it was the right time. The lovebirds made their first public appearance at Ranveer- Deepika’s wedding reception, and today after their 5 years long relationship the couple walk down the aisle, stepping into a lifelong journey with hands in hands. The couple exchanged vows, instead of a traditional Marathi wedding ceremony or a nikah. The couple zeroed in on this decision, keeping each other’s religious backgrounds and beliefs in mind.

The unhesitant actor has proved her worth in the industry by grabbing every good opportunity she seeks and today she is counted amongst the leading hosts and models in the industry.

With her strong opinions, the 41-year-old doesn’t shy out to share her views on trending issues as she believes in pushing women forward to get the right entitlement. She says, “There are little girls out there who want to live in a different world, and we have a responsibility to make that happen. We have to think about fighting the good fight and pave the way for women who come after us”

Not many people know about it but the actor is a trained dancer and singer since her school days and has expertise in Western and Indian styles. Even though she travels a lot but Shibani is also a fitness enthusiast and considers physical fitness as an integral part of her routine.