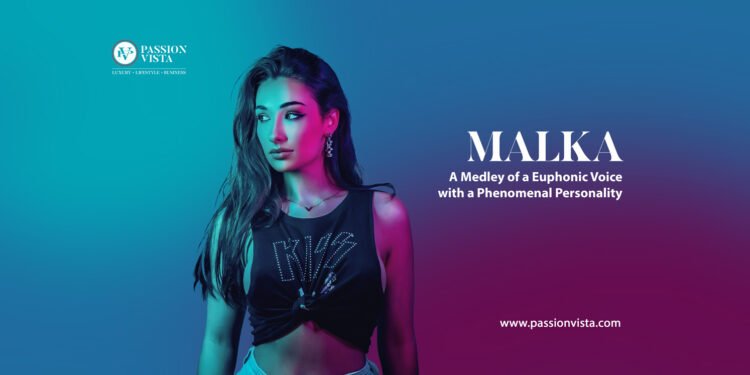 A Medley of a Euphonic Voice with a Phenomenal Personality

Having spent her formative years in Marbella, Spain, Veronica Malka was surrounded by an abundance of sunshine and beautiful beaches. Unfortunately, she felt that the music opportunities were limited in Spain so she decided to move to L.A. and London at the age of 18. From an early age, she worked hard and went to a stage school every weekend from age 8 and started classical vocal training at age 10. She says, “I had to sacrifice a lot even at a young age (missing out on parties and sleepovers to go to shows or rehearsals) but I wouldn’t have changed a single part of it!”

Her parents divorced when she was 15 years old which was a challenging time, but she felt that trials and tribulations make for better songwriters. One of her musical highlights from her childhood was when she opened for Michael Bolton’s concert in 2017 and soon after moved to L.A. for six months to pursue music, modelling and acting. She remarks “I soon realised it was all too much too fast, and I wasn’t ready to be thrown into the deep end. I then moved to London and have been here for 4 years living my dream!”

Being obsessed with singing from a young age and at the age of 8, her music teacher encouraged her to perform solo at her primary school show. When her parents saw her singing talent, they put her in singing lessons and she then realised that ‘music’ is what she really wants to do.

Veronica signed her first label at the age of 14 which was a huge milestone for her sparkling career. She says, “However, a lot of people don’t realize that being signed to a label doesn’t guarantee success. Especially if the label has signed bigger artists because they’ll put all their focus on them. After releasing a couple of my first singles with them we parted ways as nothing much came out of it”

Then she continued competing and performing internationally and at the age of 19, she joined a 5 piece girl band in London. When Covid 19 struck she decided to leave the band and pursue her own career, as she wanted sole creative control over the music since that wasn’t possible in the band. Since then she has been writing and releasing her own music with a talented team. She remarks “There have been many incidents where I’ve nearly given up on the music industry because it can be so brutal. People will try to exploit you and take advantage of you, and it’s definitely not an easy road. But somehow I’ve always come back to it, stronger from each setback.”

Veronica feels that her purpose in life is to be happy and spread positivity and confidence to whoever she meets. She expresses, “My drive stems from my character, I’m a very hardworking, driven, career-obsessed person. I always strive to be better and do more in all areas of my life. However, this can lead to burnout, which is why I’ve learnt that allowing things to unfold patiently is just as important as chasing your dreams full steam ahead.”

Having spent so many years practising and performing music, there can be moments when one can feel burnt out and for that, she expresses “When I’m feeling uninspired or burnt out from music I love to spend time in nature or read a good book. I love anything that helps me feel grounded, whether that’s meditating, practising yoga, going on walks, taking a bath, baking, or enjoying a coffee with a friend. Some of my other passions include dancing, creating content, and travelling to new places!”

As for the next chapter of her life, Veronica is super excited and says, “My management and I are actually rebranding my artistry and we’ve been working on a LOT of new music that I am so beyond excited to share with the world. I’m heading off to Amsterdam next month to work with incredibly renowned producer Pascal Nanlohy, which I’m super excited about. Stay tuned!”