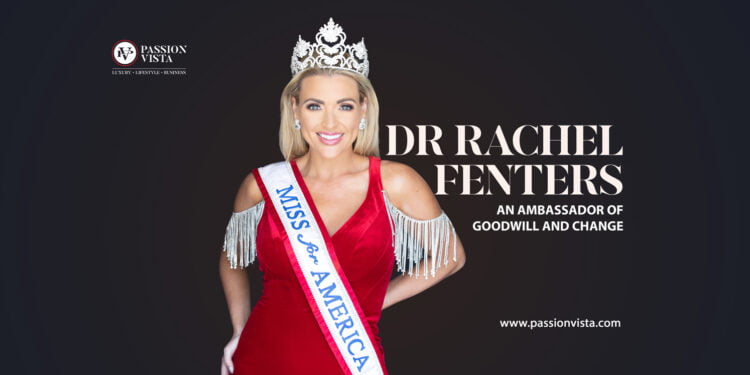 An Ambassador of Goodwill and Change

“It took 30 years, but all the dreams that I had as a child came true—I became a physician and Miss for America. My pain served a purpose, and that purpose gave me a platform to speak from and the power to inspire and encourage others,” says Dr. Rachel Fenters whose inspiring story of self-belief and a positive drive to help others has led her to make a difference in people’s lives. For her noble endeavours, she was awarded a “Healthcare Hero” by the McLeod Health Foundation which was due to her selflessly treating patients and becoming a role model for everyone else.

Rachel was raised in Hemingway, South Carolina which is a southern town composed of less than 600 people. Even though she hails from a small town, her worldview was not limited. Her parents provided her with an abundance of exposure to art, literature, and travel. She trained in competitive dance, played the piano, sang Italian opera, published her writings, was active in my youth group at church, and even served the community with a foundation called P.I.N.K. that she developed as a teenager. PINK was a literacy program that focused on creating healthy self-esteem in elementary-aged kids.

She graduated at the top of her high school and went on to study biology and biblical studies at a Christian College in Northeast Georgia. Through her college, she was able to travel to Africa on a mission trip. There she found her purpose in life which was to take care of others by becoming a physician. Keeping her faith well intact and listening to God’s voice, she volunteered throughout her four years with emotionally disabled and socially challenged kids by coordinating an after-school dance program.

She remarks “Also, I became the president of a women’s outreach organization, the founder of a dance ministry called Revive, was elected on the leadership initiative board, served as a Next Generation Leader on the National Evangelical Association, was also the president of the health and science club, and even conducted published research at the Center for Neurodegenerative Diseases at Emory University.”

With her diligence and utmost faith in herself she was accepted into the medical school at the Edward Via College of Osteopathic Medicine in 2013 and went to graduate in 2017. She says “from there, I matched into a family medicine residency at Mcleod Regional Medical Center and spent 3 years training under extremely talented and skilled attending physicians. It was during those crucial years that I saw a huge need to focus on addiction and the misuse of opioid prescriptions. I went on to pursue and then train other physicians and mid-level providers on the appropriate use of opioids and using validated screening tools as a way to identify those at risk for addiction.”

Rachel was in a romantic relationship with a man struggling with an opioid addiction whom she connected with at church. This personal trauma led her to gain weight and she even became depressed. But, she overcame this period in life with the support of her loved ones and graduated residency, lost 60 pounds, and took a job as a hospitalist at the hospital she was born and trained in.

Unfortunately, the Covid Pandemic hit and she had to face seeing patients die every day. She says “After being accustomed to pain, grief, and personal hardship, I knew that I had to find a positive outlet to encourage, inspire, and ignite a light in others. I signed up for a pageant and went on to win Miss South Carolina for America and then went on to win the national title, Miss for America in November 2021 in Las Vegas. I’ve spent the last 9 months representing the unmarried women of America, as a full-time physician, and travelling across the US to spread a message of hope and personal growth.”