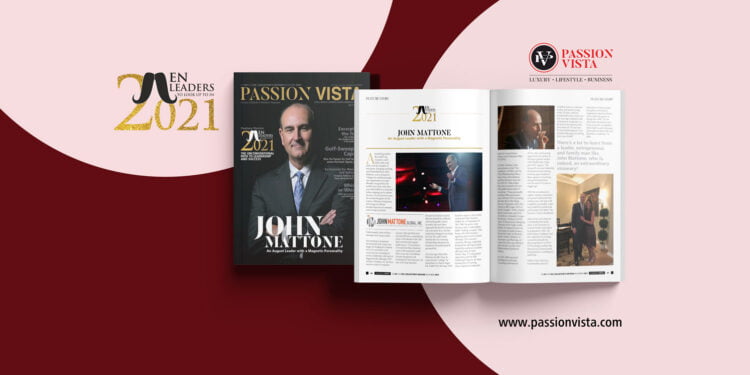 An August Leader with a Magnetic Personality

A bestselling author, the world’s top executive coach (2019, 2020, and 2021), and the Founder of four game-changing coaching and leadership firms, John Mattone, is on a mission to “change the world one leader, one organization at a time.” Humbly recognized as the world’s top coach, sixty-four-year- old worked in a corporate before stepping out to explore his best. For the first ten years, he traveled the globe for his venture, Mattone Enterprises, delivering over fifteen hundred speeches & seminars and writing two books.

Unfortunately, both of these attempts were unsuccessful.

Not wanting to pressurize his beautiful wife, Gayle, any longer for fending for a family of six, he went back to his corporate job consulting in various leadership roles such as Regional Sales Manager, SVP of Sales, President, etc. In these fourteen years of corporate journey, John got fired once and laid off twice, contributing more to the downs in life. But that’s not how this august leader sees it, “In retrospect, if it wasn’t for these fourteen years in the corporate world, there is no way I would have become the person and professional I have become,” he says with deep humility.

It wasn’t until John realized that one should live selflessly and touch people’s hearts & minds who until then supposed that his life’s journey was only about him. But this realization changed everything for him. He could finally identify the true meaning of leadership and positively transform his professional & personal life.

Ten years ago, when John Mattone was fifty-four, he experienced a “calling” for going back to what he began but couldn’t live for long. With his wife’s support, they jointly co-founded John Mattone Global, Inc. in September of 2011. JMG has grown over the years into a multi-million dollar “holding company” that houses all of their brands—speaking and executive retreat offerings, CEO executive coaching offerings, leadership development offerings (online leadership academy), franchise offering, media division (books, blog, TV and podcast interviews), and the JMG Intellectual Property division, housing their IP, owning eleven registered trademarks with the United States Patent and Trademark Office (USTPO).

In 2016, Nicholas, their son, joined as their “first employee” of JMG, now the Chief Relationship Officer. Since then, John Mattone and his dynamic team led by CEO Dr. Mike Smith, have have worked with over 500 global clients from 53 countries. “I have personally worked with and coached over 100 top CEO’s including the late Steve Jobs, Roger Enrico, Chairman, and CEO— PepsiCo, Bill Logue, CEO of FedEx Freight—FedEx, Daniel Reed, Chairman, and CEO— UnitedLex, Armando Uriegas, President—Nielsen LATAM, Yasir Al-Rumayyan, Managing Director of the Saudi Arabia Public Investment Fund and Chairman of Saudi Aramco, Faisal bin Fadel Al-Ibrahim, Saudi Arabia’s Minister of Economy and Planning, etc.” Later, his other son, Matthew, also joined in as the Chief Relationship Operations Officer.

In 2021, JMG launched Intelligent Leadership Coaching International (ILCI) a low-cost licensing opportunity for coaches in the hyper-growth markets of the Middle East, India, and APAC regions. “The demand for premier leadership development and coaching licensing opportunities in these regions is very strong and growth projections over the next 10-15 years is staggering”.

With the commitment to explore, expand, and partner on a grand-scale level in the coming years, this man with a magnetic personality is also set to publish his tenth book in December 2021 titled “The Executive Coach’s Handbook.”

John and his wife endowed a scholarship fund in his name at the University of Central Florida, from where he graduated in 1980. The John Mattone Graduate Fund for Leadership & Coaching is awarded annually to a deserving Master’s or Ph.D. I/O Psychology student who demonstrates financial need and potential in coaching and leadership.

Father of four (who he is exceptionally proud of), including Kristina, a talented teacher, and Jared, serving in the US Navy, with five grandchildren and a forty-two-year marriage combined with running four companies, is a lot, but not for someone who loves them all! “If I am laser-focused and intentional in my pursuit of this goal, everything takes care of itself.”

John discovers his principal strengths as authenticity, imagination, big-heartedness, and unrelenting passion to change the world. “On the other hand, the entrepreneur in me can make me impulsive, which leads to quick decisions, and maybe not always the best decision is a weakness,” he adds.

There’s a lot to learn from a leader, entrepreneur, and family man like John Mattone, who is, indeed, an extraordinary visionary!