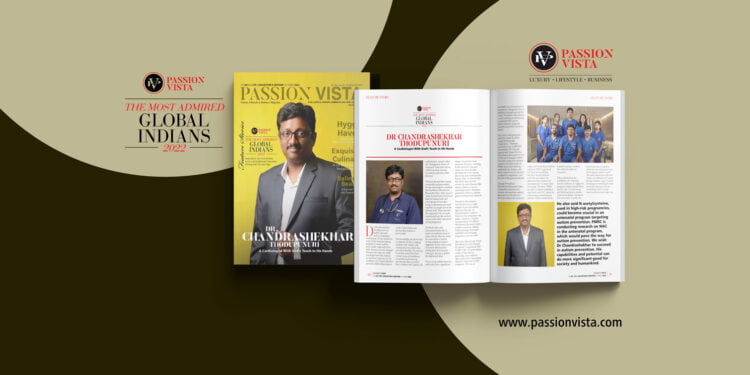 in The Most Admired Global Indians 2022
Reading Time: 3 mins read
A A
Share on FacebookShare on Linkedin

A Cardiologist With God’s Touch In His Hands

Dr Chandrashekhar Thodupunuri is a highly educated and accomplished cardiologist. He has worked at some of the most prestigious hospitals in India and has been widely respected in his field. However, his life changed dramatically when his child was diagnosed with Autism. In search of a solution for her condition, Dr Chandrashekhar pursued a fellowship program in the United States and learned that Autism is preventable.

This knowledge has driven him to dedicate his life to helping children with Autism and raising awareness about this pervasive disorder. His journey in autism research led him to meet some extraordinary researchers and amazing parents who had recovered their children with Autism. He understood a concept called the “hologenome theory of evolution” from their stories, which was most relevant for Autism and many other illnesses

When he learned that Autism is treatable and preventable, he was encouraged to establish the Providence Microbiome Research Center. After years of study, he had finally discovered that the human body and a few species of microbes living in the human gut work together as a single unit at the genome level. These microbes are supposed to be vertically transferred from the mother’s uterus to the baby’s intestines during pregnancy.

He thinks when this association breaks due to toxins or antibiotics leads to many chronic illnesses; when the association is broken during pregnancy leads to epigenetic errors, which cause structural abnormalities during brain development leading to Autism or global developmental delay

This is an incredible discovery, and it may have a significant impact on genomics and precision medicine – working in this direction may give many clues from human development to the typical day-to-day functioning of the human body. In other words, this theory may provide answers to many diseases like obesity, diabetes, cancers, neurodegenerative disorders, psychiatric illnesses, Autism, global developmental delay etc.

Their first clinical trial, “Fecal Microbiota Transfer therapy for autism”, is registered with ICMR-CTRI. The preliminary results of this trial are promising; most children who received the intervention showed a reduction in ASD symptoms. This was an incredible success and had the potential to change the lives of millions of people around the world. Providence Microbiome is now working on developing a treatment that can be administered to pregnant mothers to prevent Autism in future.

Though Providence Microbiome Research Center is founded exclusively for Autism, the team has realized the scarcity of facilities for FMT procedures for ulcerative colitis and Clostridium difficile infection. FMT is approved for these two conditions, but since doctors hesitate to do this procedure, the pharmaceutical industry is not interested in it since there is no drug. Therefore, PMRC has taken a step to establish a stool bank and FMT clinics for inflammatory bowel disease patients, which would also be helpful to autistic children later after the trials are successful.

When asked about the possibilities for reducing autism incidence, he suggested pregnant women should follow specific tips; 1) avoid eating and drinking food in plastic, 2) not to use plastic utensils in the microwave, 3) prefer the use of cast iron or stainless steel over non-stick pans 4) eat fresh organic foods 5) avoid fish and seafood since all water bodies are polluted with toxins 6) stop cosmetic usage 7) avoid drinking and smoking 8) avoid pesticide and preservatives containing foods 9) avoid sweets and processed sugar etc.