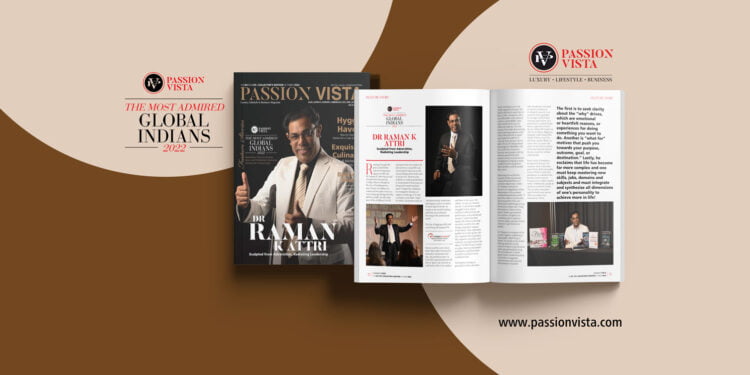 in The Most Admired Global Indians 2022
Reading Time: 3 mins read
A A
Share on FacebookShare on Linkedin

Running through the gears, hard-bitten and surviving many rigours on the way Dr. Raman K Attri has carved himself to be the man he is today. Born in Punjab in the city of Gurdaspur to a poor family of cobblers, he contracted the polio virus at a very young age taking away his ability to walk. For the most part of his childhood, he felt alienated from the world as he did not have a social life and always had to miss out on the typical things others kids used to do for fun. However, his inability to walk propelled him to compensate by learning new things and mastering them faster. Despite his condition, he managed to become an engineer at the age of 21 and a scientist a year later. Today he holds 2 doctorates and over 100 international credentials and degrees and as an author of more than 20 books, he stands as the world’s leading authority on accelerated learning in the professional world.

The fear of lagging in life and everything else haunted Dr. Raman and his zest to learn faster than others became his obsession and passion and also, his profession later on. Early life experimentations led him to figure out methods to walk faster, first in his studies and later in his career. He claims “As soon as I started my job, I realised how people struggled to learn faster and how it affected their job performance and professional success. I understood that speed with which we develop ourselves would be the only strong competitive weapon in the future. That realization pushed me to take up the role of a corporate learning leader. My corporate experience and research converged to form the idea of ‘GetThereFaster’ portal as a place where professionals and leaders could learn how to achieve excellence at an accelerated rate.”

His business strategy is grounded in three elements. First, needing to serve the niche segment of people who badly and direly need what he has to offer. Second, he offers an unbeatable niche solution with an unmatchable value that would not be easy for others to replicate. For that reason, his world-class training and coaching programs come with a fair promise to speed up its patron’s path by 2x and cut their journey time in half. Third, Dr. Raman keeps his programs affordable, and it’s a risk-free investment because most people with big dreams spend their hard-earned money on professional development, hoping to make a difference for themselves, their families, and the people they serve.

Balancing two artificially created divides of personal and professional lives is of extreme importance, insists Dr. Raman. Instead, he focuses on integrating various dimensions of his personal and professional personality. “I have been able to synchronize the horsepower from each dimension and leverage it to go forward at a faster rate. Using this mantra, I have written poetry books, got awarded as a painter, recognized as a scientist, got to speak on various stages, and got 5x more chances to get featured in media.”

Dr. Raman is a recipient of the world’s highest certifications. Informally called ‘King of Speed,’ he stands as the world’s leading authority on the science of speed in professional and organizational learning. He has authored 23 multi-genre books, besides hundreds of articles in magazines and journals and is also the first business researcher who introduced a new field of ‘speed to proficiency’ to scholarly research. As a corporate learning leader, he manages a hall of fame training organization. As a performance scientist, he has been recognized as one of the top Global 500 Leaders of 2021 by the Brainz Magazine, alongside stellar leaders like Oprah Winfrey, Gary Vee, Jim Kwik, and Jay Shetty, to name a few. As a poet and artist, he has been a recipient of the international artist of the year award by ArtTour international.

Some words of wisdom to be shared by him are: “In common sense, if you have good clarity about your paths, you are likely to reach your destination in a shorter time, but that clarity seems to become rare in today’s chaotic world. Traditionally, people do not focus on holistic clarity. You can gain tremendous speed towards your success when you master two-dimensional clarity: The first is to seek clarity about the “why” drives, which are emotional or heartfelt reasons, or experiences for doing something you want to do. Another is “what for” motives that push you towards your purpose, outcome, goal, or destination.” Lastly, he exclaims that life has become far more complex and one must keep mastering new skills, jobs, domains and subjects and must integrate and synthesise all dimensions of one’s personality to achieve more in life!