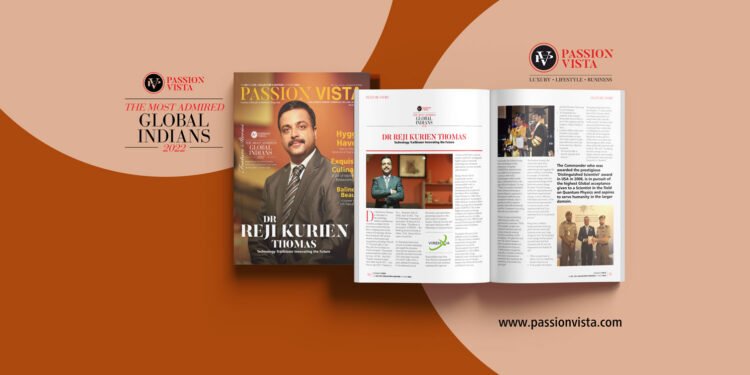 in The Most Admired Global Indians 2022
Reading Time: 4 mins read
A A
Share on FacebookShare on Linkedin

Dr. Reji Kurien Thomas is a disrupter in the technology industry and has won countless accolades for his meticulous work which has been a stepping stone in the realms of technology. He has been bestowed with various awards, achievements and recognitions including “NewsX TV Channel India A-List – May 2022 for Excellence in Tech Innovation”, Nominated and awarded the Golden Visa by Govt. of UAE – Jan 2022, “World’s Greatest Leaders 2019-2020 Asia & GCC – Asia One in Apr 2021”; “Industry’s No 1 – Business: 2020-21 – BARC Asia” in 2021, “Top 50 Technology Visionaries & Innovators” at Intercon Oct 2019, Dubai , “Excellence in Encryption” at FINSEC – The Banking Security Summit at Dubai , UAE , March 2018 to name a recent few.

Dr. Reji always had a keen interest in frontier technology and sought his education from the best institutes in the world like Stanford University USA, Kent State University USA & IIT Delhi. With a great aptitude for learning, he has obtained several Doctorates, and undertaken pioneering research, in the niche areas of Computer Science, Network Security and Alternative Medicine with a Fellowship in Corporate Social Responsibility from New York. He has Commanded & directed men and machines; maintained & improved various technologies used on modern platforms. strategised highly sophisticated and technologically advanced information systems, security and enterprise.

Being a former Naval Commander and an avid aviator, he has done commendable work in conceptualising and developing niche projects in the Indian Navy including Naval Intranet in 1998, Navy-wide enterprise E-Learning in 2004, Malware Analysis Lab in 2008, securing Naval networks and in TEMPEST. He is also highly decorated as having worked at the highest echelons in network security in India including the NSA, DRDO and securely hardening the Indian communication backbone infrastructure.

During his 20 years in the military sector in aviation, Dr. Reji was always inclined toward alleviating pains and poverty in society. This prompted him to start TechnoPilot® in 2013 which aims to provide a large umbrella under which one can provide services of various natures from Network Security and Business Success.

Currently, he is forerunning the technologies of the enterprise Company VIRENXIA where he aims to combine core quantum sciences with niche technologies which would play a substantial role in the agricultural industry. He says “There is a need to transition from chemical farming to agroecological, regenerative farming to enable an easy transition without a dip in profits as well as improve quality and yield consistently and the Company is executing this role very admirably.”

When it comes to building solid business ethics and practices he comments “With Technopilot, people were trained to harness spiritual energy towards creating business excellence at the workplace. We plant the seed into the clients’ business that exceptional leaders are manufacturers of success. Collaboration, receptivity, empathy, intuition, resilience, & sensory awareness are essentials that constitute the backbone of my leadership principle.”

Being from a military background and switching paths when he entered the corporate arena was a huge change for him. He has basked in the change and has picked up small tenets that have resonated with the way the organisation was shaped, he says “

The passion that drives him, he remarks is “It’s the esoteric laws of the Universe which are being researched by us and at some Elite Labs the world around. We believe that man and all life forms share a universal floor in that they are all linked to each other within the electromagnetic field of the earth; and that all life forms carry their own electromagnetic field, which when sufficiently distorted will result in “dis-ease”. Accepting that all is energy, we see organs, diseases, and remedies as having their own particular frequency or vibration.”

The Commander who was awarded the prestigious ‘Distinguished Scientist’ award in USA in 2008, is in pursuit of the highest Global acceptance given to a Scientist in the field on Quantum Physics and aspires to serve humanity in the larger domain.