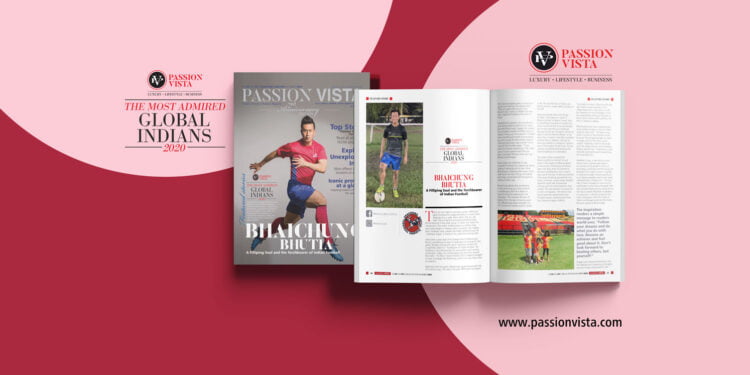 A Filliping Soul and the Torchbearer of Indian Football

There are two ways to perceive success- either you gloat and become unapproachable or convert your obstacles into a path where others like you can walk. Warm-hearted and passionate Bhaichung Bhutia belongs to the latter group. A name that needs no introduction, this striker football player is a selfless man who seeks delight in helping others succeed in life. Hailing from northeast India, people admirably call Bhaichung the “Sikemese Sniper” in honor of his unerring shooting skills.

India owes a great deal of its football fame to Bhaichung Bhutia, considering the level of dedication he showed to the game, thereby winning the nation numerous medals. He is rightfully called the “Torchbearer of Indian Football” for bringing in revolutionary love for yet another sport among enthusiasts. Today, this retired player has fans from around the world. The Sikkim State Football Club is indeed privileged to have a manager like Bhaichung, who in no way is less than an epitome.

Right from the first game, Bhaichung’s goals announced that he is here to stay. This was in the year 1993 when he played the Calcutta-based game, scoring four goals and making nine appearances. That one game did not just mark Bhaichung’s mark on football but was also hoped by football enthusiasts in India.

Modeling his passion into a profession and doing what he did from the heart became Bhaichung’s biggest life lessons. He considers himself incredibly lucky to make a living out of his passion. Football was something he loved since growing up, and to play for the country against international teams was a dream come true for this humble player. “If you want to achieve something in life, make sure it is your passion and that you love it enough that you never give up,” Bhaichung divulged.

Even today, he continues to stay involved in things he is passionate about without letting go of his love. While Bhaichung is stepping into newer shoes with time, he hasn’t let go of football and stays connected with the game in some or other way.

Bhaichung admits that succeeding in life and living up to that position is challenging. But he is adept at transforming his weaknesses into strengths. The moment the fear of falling from the seat of success grips him, Bhaichung draws strength out of it to perform better and try harder in life. He uses the fear of failure as a driving force to create better versions of himself.

Being passionate about the things he does in life means so much to Bhaichung that he doesn’t invest time in something that doesn’t interest him. Some would see this as his personality, but he also sees this as a challenge because he lets go of projects where he doesn’t see his interests fitting. To the many fans, it seems more like inspiration and less like an obstacle. Sticking by what you believe in a dogmatic world is one of the hardest things to do. To see a person like Bhaichung stand up for what he believes in is exemplary.

The Indian striker incepted the Bhaichung Bhutia Football School, which is the largest football program in the country. Bhaichung reminisces about the days when he wanted to become a professional, but it wasn’t easy due to the lack of learning facilities. That sense of lacking spurred him into action to initiate a place where football aspirants could seek professional training and find a launchpad for their careers. The idea became a massive hit in terms of response. The school now has its branches spread across one hundred centers coaching more than four thousand happy students.

Truly Indian at heart, Bhaichung Bhutia also hopes to give travelers a richvillage experience. Very soon, he will be stepping into the hospitality sector by inaugurating Homestay Retreats to boost local tourism while uplifting the lives of people in villages.

Bhaichung shares how organizing the many things he does at once is a little tough to cope with. “I’ve been lucky when it comes to the football school because I found good people to coach, manage, and run the show across centers. Hopefully, I will be fortunate with the village tourism and Homestay Retreat venture too.” Bhaichung is now fervently looking forward to launching his hospitality line.

Needless to say, a man like him who knows how to generously balance his service to the people in terms of becoming a facilitator and the laurels he brought to his state & nation is worthy of several accolades. Bhaichung Bhutia is an Arjuna awardee and has also been conferred with a Padma Shri. The Asia Hall of Fame included his name for his contribution to the field of football. FIFA also honored Bhaichung by listing him in the Top Hundred Influential Footballers. A university in Calcutta bestowed him with a doctorate, while the states of Sikkim and Bengal presented the Ratna Bhushan Award to Bhaichungb.

The inspiration renders a simple message to readers world over, “Follow your dreams and do what you do with love. Become an achiever and feel good about it. Don’t look forward to beating others, but yourself!”

People who surround themselves with this filliping soul’s presence or thoughts are sure to stay invigorated for life!