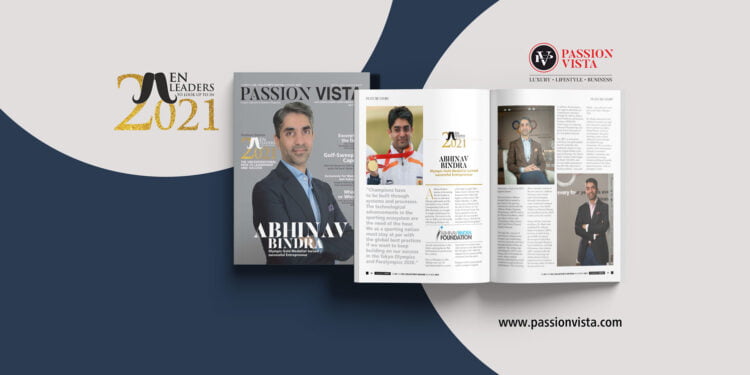 in Men Leaders to Look Upto 2021
Reading Time: 2 mins read
A A
Share on FacebookShare on Linkedin

“Champions have to be built through systems and processes. The technological advancements in the sporting ecosystem are the need of the hour. We as a sporting nation must stay at par with the global best practices if we want to keep building on our success in the Tokyo Olympics and Paralympics 2020.”

Abhinav Bindra’s journey to becoming the first Indian to win an individual Olympic gold medal and the first Indian to win a World Championship Gold in Air Rifle shooting is an example of a single-minded quest for perfection. His victory in the 10m Air Rifle event during the 2008 Beijing Olympics was of the Rajiv Gandhi Khel Ratna Award, Abhinav was honoured with India’s 3rd highest civilian award, The Padma Bhushan, in 2009. He was also conferred with the title of (Hony.) Lt. Col. in the Territorial Army. For his exceptional service to the Sport, he was awarded the Blue Cross in 2018 by the International Shooting Sport not just a personal one; it also broke a sporting barrier that had haunted our proud nation for a century.

Born in Dehradun in 1982, Abhinav won over 150 individual medals in a career that lasted over twenty years. After taking his last shot at the Rio Olympics 2016, where he finished 4th, he announced his retirement from the sport.

Recipient of the Arjuna Award and the youngest recipient Federation, which is the ISSF’s highest honour.

Post-retirement, Abhinav decided that he wanted to give back to the sporting community and founded the Abhinav Bindra Targeting Performance (ABTP) Centres for Physical Excellence, which uses Sports Science and Technology to help athletes with Data-Driven Physical Health Solutions.

Through this, verticals of performance enhancement, strength and conditioning, recovery protocols, and injury management/prevention are explored. The cutting-edge technology by ABTP is also being used in the healthcare sector, where medical patients suffering from varied conditions are given physical rehabilitation. The technology allows Scientific Analysis of the root cause of a condition which gives the Centres’ expert physiotherapists thorough information to create customised treatment programmes. Over 10,000 Athletes and Medical Patients have benefited from the ABTP Centres across the country!

Along with the Centres for excellence, Mr. Bindra also established the Abhinav Bindra Foundation (ABFT), by virtue of which he has successfully introduced the concept of Global Best Practice through Education, Social Upliftment, and High- Performance Interventions. ABFT’s initiatives like the STEAM Scholarship and Athlete Mental Wellness programme aim to improve the sporting culture in India at the grassroots level.

In addition, the foundation also supports affordable and comprehensive education through The Abhinav Bindra Sports Medicine and Research Institute (ABSMARI), which focuses on imparting Advanced Physiotherapy and Sports Science Education at par with global standards.

The ABFT, in association with three-time gold medalist Niccolo Campriani, also undertook a project to train three refugee athletes in the sport of shooting. The ‘Make a Mark’ initiative, which began on March 10th 2019, came to a successful conclusion on June 8th 2021, when two of the three athletes – Luna and Mahdi – were selected to take part in the Tokyo Olympics 2020.

Mr. Bindra chaired the ISSF Athletes Committee for eight years and spent considerable time in promoting Athlete Mental Health, as well as contributing to the policy that helps create a robust Addressal System through the Global Olympic Frameworks. He’s currently a member of the International Olympic Committee’s Athletes’ Commission and is persistently working towards instilling all possible advancements in the Indian Sports Ecosystem. Truly, an exemplary Leader!