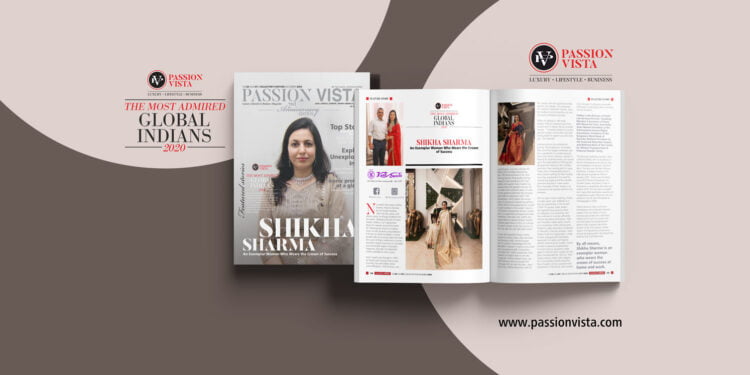 An Exemplar Woman Who Wears the Crown of Success

No matter who meets Shikha Sharma, they’re charmed by her empire-building style that she carries with utmost grace, as though budded from her genes. Managing Partner of Kanti Sweets, Shikha is an inspirational figure for women around the world for following her dream of making food, her life, business and profession. It brings her extreme delight to serve people with lip-smacking delicacies that are a part of every celebratory occasion and Kanti Sweets becomes an inevitable and memorable aspect of people’s happiness, through the delectable sweets available at their outlets.

Kanti Sweets was founded in 1957, by Pandit Jyoti Swarup Sharma and currently, has over eighty stores across Bengaluru, five factories, two warehouses, and one in-house ISO 9001:2015 certified food testing lab. The three verticals of this food testing lab are- food quality testing, research and consultancy for food safety and quality. Kanti Sweets has always been the people’s favorite, for its taste and nutritional value. To cater to the growing demand, the company extended its operations with 1700 employees. Kanti Sweets has always been a strong and welcoming platform, which offers encouragement for women to get involved in the sweets’ industry. The prime achievement of Kanti Sweets lies in a supportive and passionate team working in the back end. Shikha also supervised the launch of Kanti Sweets’ mobile application in 2015, an initiative to reach people across the country. So far, the app has over lakh downloads!

It was Shri Rajendra Prasad, Shikha Sharma’s father-in-law, who identified her business skills. He encouraged her to combine knowledge from her Bachelor’s degree in Home Science with her occupational skills. Somewhere, he knew that Shikha would take Kanti Sweets to heights that no one else imagined. Shikha’s father-in-law was right because she has brought the company this far over the years. Apart from him, Shikha shares the credit for her success with her supportive family, parents, and siblings. She recognizes her husband, Shailendra Sharma, to be her backbone and driving force for her successful professional journey.

While she believes in self-made people, Shikha is someone who finds contentment in being a family-oriented woman. “I sincerely accept as true that genuine success comes when you have loving people to support you and cheer you,” she observes.

Looking back on her professional journey, the foodpreneur remembers that one of her biggest challenges was the unavailability of unskilled laborers, when she started. However, instead of looking for qualified people, she owned up to the responsibility of offering skill development training to the unskilled workforce, thus creating jobs for many. Today, she is immeasurably proud of every person working for Kanti Sweets since they comprehend the need for maintaining hygiene and the scientific processes required to make sweets. Every employee of Kanti Sweets is an empowered and valuable asset for the company.

With an open mind to learning, Shikha considers every such challenge as a learning opportunity. In the current COVID-19 scenario, Kanti Sweets has regarded these pressing times as challenges to be overcome, and has continued to function efficiently without disrupting the business. New and innovative health-based variants such as Spirulina Chikki and Spirulina Nutberrry Laddu have been introduced as flavourful, immunity boosters. Kanti Sweets is the first organization in India to have undergone the Workplace assessment for safety and hygiene (WASH) scheme by the Quality Council of India to assess its preparedness to restart and run operations safely against Covid-19. Kanti Sweets has also been honored with the 13th D.L. Shah Quality Award, under Gold category, for its tremendous efforts along the lines of quality control, assurance and compliance. In the future, Kanti Sweets looks forward to adopting sustainable techniques of packaging and minimizing the use of plastic.

The National Leadership Awards, 2020, conferred Shikha with an Excellence in Women Entrepreneurship Award, thus acknowledging the dynamic lady that she is. She also won the Best Woman Performer in Sweets Industry at the International Inspirational Women Awards, 2020. Shikha was the Most Successful Woman Entrepreneur for the Best Sweets and Bakery Chain in Bangalore as awarded by the India Icon Awards 2019. She has been rewarded with many other prestigious awards and recognitions as well. Above all, she was enlisted in the 40 over 40 awards by She the people in 2020.

Shikha Sharma’s story is of a true entrepreneur who received immense support from her family. It is of a visionary personality who took Kanti Sweets to the acme of success and currently leads the entrepreneurial sphere while inspiring many other women of the 21st century. Shikha dreams of empowering conservative women by helping them see beyond the shackles that hold them back.

By all means, Shikha Sharma is an exemplar woman who wears the crown of success at home and work.