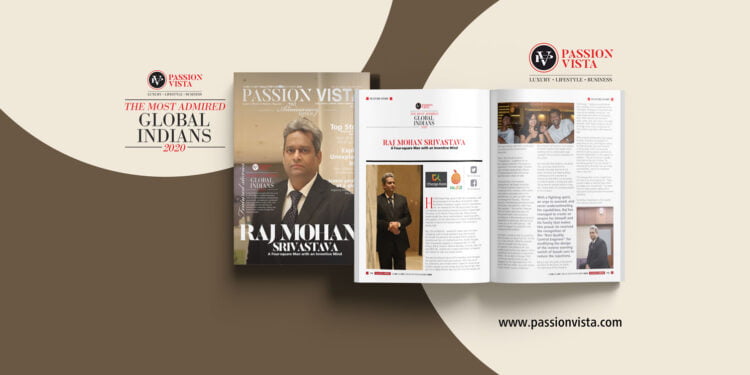 A Four-square Man with an Inventive Mind

Humble beginnings, gurus in the form of parents, and the perseverance to rise above all situations make Raj Mohan Srivastava’s success story an inspirational one. He received his first life lesson when he was just eighteen and would accompany his father, Kailash Nath Srivastava, to his friend’s house every day. Being among people taught him about social behavior, respecting elders, and patience. On the other hand, his mother, Sushila Kumari, imparted to Raj his first business lesson- The customer is always right.

Raj, CEO of MDA INC. worked for sixteen years for other companies until he finally decided it was time to work for himself. He started as the window fashion products manufacturer for a US multinational firm, Hunter Douglas. After successfully supplying to companies like TCS, ISB, Infosys, Bharti, Ericsson, Nokia & Ranbaxy, to name a few, he and MDA INC. entered into turnkey construction of exterior and interior for high-end private houses.

The idea that blossomed out of his inventive mind changed the way the world could save resources. With the use of his automation and window blinds in place of conventional curtains, people can save energy by using natural light. Not just is it a highly efficient idea, but also one that people can feel good about with their contribution to protecting the environment’s resources.

Soon, Raj intends to launch “ChargeKaro,” a platform for an EV charging network. The project is currently in the initial stage. His plans also include inaugurating a Master Charging Station with star lounge facilities and a chain of cafes.

Coming from a non-business background, Raj fought the battle of finding financial support for the inception of his company. After careful calculations and application of his experiences, he came up with a way to manage the finances. “We took almost a hundred percent advance from the buyers and asked for credit from the suppliers.” Yet another challenge that he had to overcome was with the government’s non-conducive compliance in the manufacturing sector, especially in excise duty. But Raj found a way out of this difficulty too. “We hired the biggest tax consultant and conquered the problem.”

Strength is innate as well as something that humans can draw from life. For Raj, it is a mix of both. While he received a lot of strength from the values his parents transmitted to him, his professional journey also played a role in polishing him to become a magnificent leader. An incident in the year 2004 confirmed that he is here to stay. “I bagged my first big project from TCS worth INR ten million. As a new entrant in the market, it was a challenge!”

Diversifying in all horizons, from exterior to interior products like façade roof & cladding and his uninterrupted vigor resulted in the successful completion of the project.

Raj concluded that patience, calculated risks, and using slump time to diversify ultimately lead one to his goals. He shares how keeping things unambiguous with customers by making sure that there is an exchange of essential details in writing and never taking them for granted results in long-term relationships, thus bringing stability to the company.

With a fighting spirit, an urge to succeed, and never underestimating his capabilities, Raj has managed to create an empire for himself and his family that makes him proud. He received the recognition of the “Best Quality Control Engineer” for modifying the design of the reverse warning switch of Suzuki cars to reduce the rejections.

Being a man who walks in the present and plans for the future, he shares the importance of fast-changing technology. “Update yourself before your company and its system becomes redundant. Whatever is important now may not be available tomorrow.” He urges those who dream of becoming big in their fields to set short-term goals, work hard, and move in the right direction. With that checked on the list of things to do in life, success has no other place to go than in the dreamer’s laps.

With simplistic philosophies like staying humble, thanking the almighty for everything he has, and forgiving others for their mistakes, Raj races forward in the journey of life. He staunchly believes in giving people a platform to become independent. In this regard, he explains, “The Art of Dying is equally important as the Art of Living. Try excluding yourself from your family. If they live self-sufficiently, then you have accomplished one of the important roles in your life.”

The message that comes straight from his heart is an encouraging one. “Keep yourself happy so that the God within you keeps your morale high.” He claims that this keeps people happy and in high spirits during favorable and adverse situations.

Raj Mohan Srivastava is a four-square man with an inventive mind.