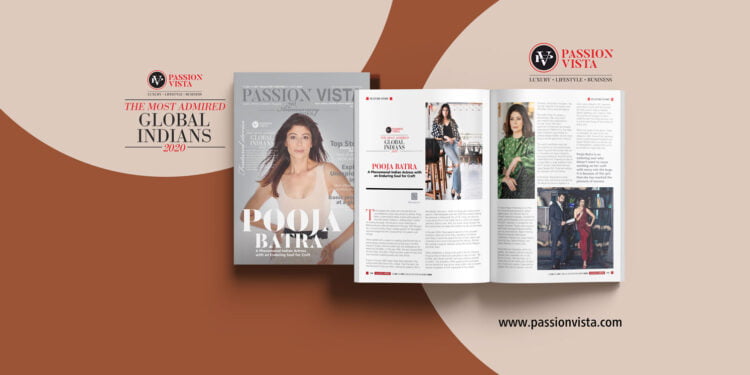 A Phenomenal Indian Actress with an Enduring Soul for Craft

Those people who settle don’t tend to find the unconditional success they set out to achieve. Pooja Batra, a phenomenal Indian actress and producer, is one who doesn’t believe in settling when it comes to chasing her goals. She became a much-loved face in Bollywood soon after she debuted in the year 1997. Brought up in an army family, Pooja is always grateful for the support and encouragement she’s received from her parents and siblings.

What started with a career in modeling transformed into an extraordinary journey of acting and producing in the film industry! Pooja is the first Indian face and spokesperson for Head and Shoulders. In the year 1993, she was crowned Miss Femina India. Since then, Pooja has been a part of more than two-hundred modeling events and ramp shows.

It was in the year 1997 when Pooja Batra debuted in the acting world with the hit film, Virasat. Over the years, she has featured in forty-one films, making her presence felt in the industry. Not just in Hindi, but Pooja also shared screen space in three Malayalam and two Tamil films before making her presence in Hollywood. Out of the many, one role she is very proud of is in One Under the Sun, where she played astronaut Kathryn Voss. With this movie, Pooja became the first actress from the Indian film industry to play an astronaut.

In the year 2004, Pooja experienced one of her proudest moments, when one of her films, Taj Mahal: An Eternal Love Story, in which she played the role of Noor Jahan, was screened at the Cannes International Film Festival. She has also worked in popular television shows like Lethal Weapon and SEAL Team.

While competition is always at its peak in the film industry, Pooja survives on three basic principles to stay on track. “Be humble, don’t doubt yourself, and never compare yourself to others,” she enlightens. While grasping these principles, she has worked her way up her career graph, only to receive massive recognition for her impeccable acting appeal.

It makes Pooja immensely proud that her achievements gained her global appreciation. But the fact that her school, Kendriya Vidyalaya, included her name and photograph as an alumnus in the 2021 calendar is a recognition she greatly cherishes. Pooja’s name appears with other distinguished personalities such as Sonali Bendre, Rakesh Sharma, Wing Commander Abhinandan Varthaman, Prakash Jha, Sanjay Mishra, Sushmita Sen, Manish Pandey, and Jairam Ramesh, to name a few.

Pooja finds her inspiration within her people. Her parents and her husband, Nawab Shah, embolden her to take life as it comes. She also looks up to those who live for others and indulge in acts of giving to society. Pooja admires people who care for animals, save the homeless, and protect the planet. She has high regard for the women who efficiently strike a work-life balance.

Personally, Pooja too sustains a philanthropic side, using which she’s helped many organizations for their causes. Her most significant contributions are towards organizations VIBHA & Cry. She helps these institutions raise money for underprivileged children and for those living in the old age homes in the US.

The need to get better every day and outshine her own performances makes Pooja the hard worker that she is. Extremely strict about discipline, she enjoys waiting for what life would unfold before her. Preparing to step on a stage before a large audience makes this fit actress’s heart beat fast even today. Besides this, Pooja likes getting her adrenalin rush from hiking.

In the future, Pooja wants to play diverse roles, and she has a bucket list. She desires to star as a regular in a series, play a Marvel or DC superhero, and wishes to work with her favorites like Patty Jenkins, Kathryn Bigelow, Steven Spielberg, and JJ Abrams. With the way she still manages to charm audiences with her bubbly persona, she is sure to strike things off her bucket list pretty soon.

While that speaks of her dreams, Pooja is enthusiastic for some of her new releases in 2021. Some of her upcoming works include Draupadi Unleashed and Squad. Besides these, she will also star in Hexengeddon, a project that is in its pre-production stage right now.

Pooja Batra is an enduring soul who doesn’t want to cease working on her craft with every role she bags. It is because of this grit that she has reached the pinnacle of success.