The man who failed setbacks

Eating is necessary, but cooking is an art. An artist, as we all know, typifies eccentric creations. Among the many art forms, culinary is one that requires keenness, the thought that “the sky is the limit,” and far-reaching endurance. James Pulham, a renowned chef, doesn’t just have an appealing career but is a charming personality in himself. When you find a job that is in line with your passion, you tend to become better at work and in life! James’ story isn’t far from this thought.

Food has always been special to him. Growing up in a large family, he owned up to the responsibility of taking care of his siblings in the absence of their parents. If one can take charge at the innocent age of ten, all possibilities are finite. James took care of his siblings with an entrepreneurial spirit. Today he is an established chef and a proud father of two happy children.

James describes food as an “International Language, one that expresses love.” He taught over five-thousand international chefs and realized how they miss meals prepared by their mothers. Yet again, he took charge and imparted small drops from the mighty ocean of his culinary knowledge. James theorizes that people cannot argue with their mouths full. It makes one happy and is one of the very few things that you can share to your heart’s content. All these are cumulative reasons why he chose food for life.

Several of James’ students have found their path in the culinary industry and are spreading love through food around the globe. The zealous man inaugurated the Culinary Arts Learning Centre in Goa to enable the youth to spread their wings in the field of Culinary Arts. He continues to teach as the Double Head of Faculty for a tertiary institution in New Zealand. His global experience is a godsend to those who wish to firm their foot as creative, successful chefs. James has also been the face of many cooking shows on Indian television.

Some teach to impart, while a few like James teach to create magnanimously successful lives. Watching his students have a lightbulb moment is where he finds his strength to keep going. It matches the feeling of a raced yet excited heartbeat that he felt when he saw his children for the first time. He feels anxious before a speech or when he has to lead a team as an Executive Chef for special events. But once he gets the chef’s hat on, the world is an oyster.

Being an international chef and a renowned teacher isn’t a casual duty. A person needs regular upgradation of skills and a flow for innovation, which James never lacks. Although, he doesn’t let overconfidence burn his reputation. He expresses this reality with utmost honesty, “I’m my worst critic. There is a term “mise en place” in the cooking world. It is French for “putting in place.” The phrase highlights the importance of “preparation” in the cooking world. To keep my work life in place, I hold diligence, research, and planning in high regard.” All of these factors, plus the hard-work surely add up to James’ recipe for success. 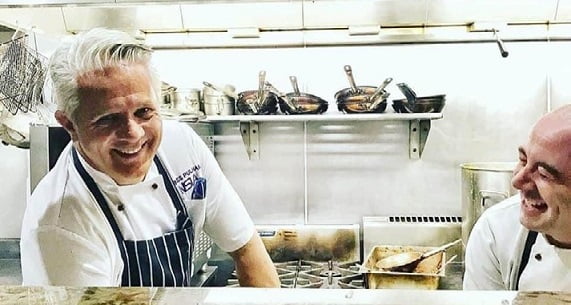 People from the arts field tend to resort to poetry for inspiration. Robert Frost’s epic poem, The Road Not Taken, is one piece of written art that inspires James. It is about making the right choices, which allows him not to be too hard on his dreams, a path that he chose. But beyond everything else, James believes in having faith in himself. He testifies how it is easier to find success when you compliment yourself for even the little things. A belief as strong as that makes success inevitable.

There came a phase in life when James lost his house, business, and forty good people who worked with him. But he failed the setback and went back to his roots- cooking. “Treat adversity as a gift – it is good to have a breakdown to have a breakthrough!

James Pulham’s plans for his culinary school are to allow local trainees and experienced chefs to cater to the local tourism market (post the pandemic) and NRI’s. He wants to give promising chefs a chance to blossom in a western learning environment to enhance their skills.

Simultaneously, James is also working on `Jimmy Frites’ simplicity personified,’ a fast-food chain that he dreams to put on the global map. With nobility, he wishes to share the profits from this project to clean the rivers, beaches, and waterways in India. Alongside this, he currently manages a hospitality establishment in the South Pacific. To top it all, James is in talks to create a business for a Culinary Internship in Europe and also organize culinary tours for those who follow hospitality.

James Pulham is the salt that completes the dishes of culinary success.