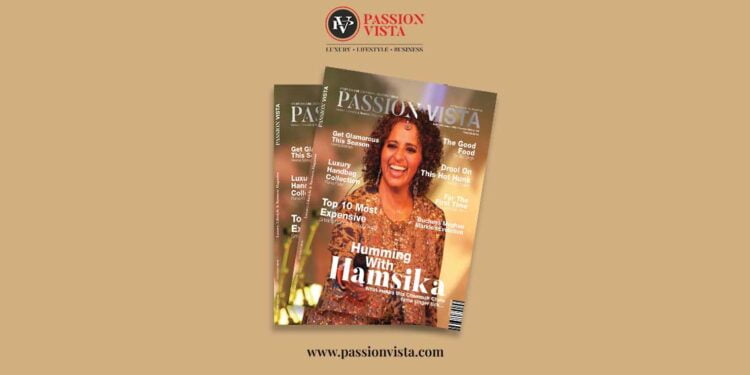 in Cover story, October 2018 Issue
Reading Time: 7 mins read
A A
Share on FacebookShare on Linkedin

A trained Carnatic singer she has been the voice behind many of the modern cult songs that sits in our playlists, from Bollywood to Indie to Psychedelic to EDM, Hamsika is everywhere. And this is just the tip of the iceberg; Hamsika has a large repository of songs in Indian regional languages under her name.

Though Hamsika has been doing collaborations and playback singing for many movies, but it was the song ‘Chammak Challo’ with Akon that shot her to immediate fame and has given her a dedicated fan base.

The dynamism in her voice was ubiquitously felt among all the echelons of music industry which reciprocated in the form of offers from music producers throughout the length and breadth of India. Some of the big names she has worked with include Vishal- Shekar, Pritam, Shantanu Moitra and Shankar-Ehsaan-Loy. Not to mention the mammoth list of jingles she has voiced for television ads.

Still people get flabbergasted when the notion sets that the song Chanda Re Chanda Re from the movie Eklavya has been also voiced Hamsika, proving her versatility ranging from soulful songs to punchy tracks. She leaves her audience speechless and teary when tracks such as Jhoola Jhool is played from the movie Stanley Ka Dabba, a film by the talented film director Amol Gupte, wherein not just the movie but Hamsika’s song also received widespread critical appraise. Lullaby songs or ‘Item’ songs, Hamsika can do justice to all with her voice like a boss!

Talking about her illustrious career in television and radio jingles, you would be surprised to know that
she is the voice behind the iconic commercial of Slice Mango – Aamsutra, which features Katrina Kaif. Her career in jingles, as she regards it, was very natural to her, because of having both her parents working in the advertisement industry.You may also recognize her voice in the Johnson & Johnson baby ads.

Hamsika has travelled and performed in some of the most happening Music Festivals in Europe like Ozora Festival, Boom Festival, Antaris Festival, Indigo Festival , Metsa Festival, Kubana Festival with Juno Reactor.

Hamsika along with the very talented music composer Kaushal Inamdar, released a single from the Heartbreak Trilogy, where she collaborated with Amir John Haddad.

Apart from her Hamsi & Band which comprises of Bollywood Dhamaka Songs,Hamsika Iyer and Kaushal Inamdar also have a world music band called RASAYATRA.

When asked about her childhood, Hamsika recalls that it was simply amazing. Though back then, she was not much into singing whereas more into sports. On the contrary she was seen as a very shy person
when it came to singing. “I guess it’s natural when you grow up with 2 elder brothers,” adds Hamsika while speaking about her childhood with us.

Though it wasn’t long when her talent for music was noticed by her family, as she used to replicate the tunes her father played on his flute and thus she considers her father – Shri S.Balachandran – who is musicologist as her guru. For a while she has also learned the Carnatic style singing from Mrs. Kalyani Mani and Chandrashekar Bhagavathar. 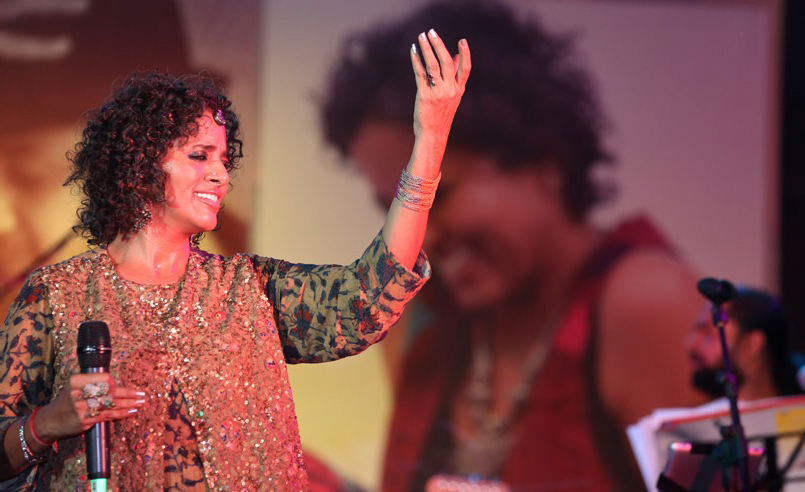 Her parents were keen that she should learn Hindustani classical music when she was in school. So she
started learning from Mrs.Vrinda Deshmane initially. After a few years, she got lucky to learn for a brief
period of time from Pt. Phiroze Dastoorji too. At present, she is training under Binay Pathakji, who is the son of Balram Pathakji, the legendary sitar player.

Her initial training paid off as at a young age only she started singing for ad jingles when in school and
college. Not many of us know that she has been one of the first contestants in the first episode of now
a legendary show –TVS Sare Ga Ma Pa – where in she went till finals. Her appearance in the show brought her widespread accolades and opened opportunity for musical projects with some very talented individuals. That’s how she met Shantanu Moitra who gave Hamiska her first major film song ‘Chanda Re’ from Vidhu Vinod Chopra’s film, Eklavya. And we are all aware how amazing that song turned out to be.

Seldom a singer gets an opportunity to shine among the legends and Hamsika got her when she gave the
female playback vocals for the now cult song – Chammak Chalo along with the platinum artist Akon
who gave the male vocals. She had always been an associate of Vishal – Shekhar and firmly believed that
the duo would dial her up when a song has her name on it and voila!, they did, calling Hamsika to the studio for recording. “I remember how shocked I was to hear that I am going to be singing a duet with Akon, the international artist and the song has the awesome SRK with the spontaneous Kareena”, says
Hamiska when recalling her experience of dubbing that song. She credits her life changing experience through this song to Vishal-Shekhar as they had given her full creative freedom to make the most out of the song from her lines, which has the history know, she shone bright like a star.

A Google search on Hamsika would leave you awestruck when you scroll down the hits under her name; her voice has been elemental in many songs we adore till date. She personally loves all her works but the one which is closest to her is the song from the movie Agent Vinod called Raabta.

And The Award Goes To… Hamsika!

Hamsika is one of those rare breed of artists who have never cared about any recognition or awards and
it’s her sheer passion for music that drives her project one after another. Still over the years she has garnered a whole plethora of awards under her name. ‘Ann Chimb Pavasaali’ is according to her a very special song. It’s a Kaushal Inamdar’s song for the film Ajintha. In 2015, Ajintha grabbed all the awards.

This song got her so moved that she recorded the song only to take it to the next level. No wonder this song bagged her awards like- Maharashtra State Award, Radio Mirchi Award, Big FM Award, Zee Award and Sahayadri Award.

Her Bengali song for Shantanu Moitra – Aparajita Tumi, from a beautiful Bengali movie gave her a Radio
Mirchi award for best song. She got the Zee Kannada award for most popular singer for the song ‘Ninna
Danigaagi’.

Her Marathi song, Mann Chimb Pavasali which she sang for Kaushal Inamdar for the film AJINTHA got
her the Maharashtra State Award,Radio Mirchi Award and Zee Award.

Hamsika has done many international collaborations and she loves them all. Her first project was with
Bombay Dub Orchestra in 2011. Shankar Mahadevan had recommended her name to Andrew Mackay and she became an integral part of the group’s songs from their album 3 Cities.

Same year, she got a call for collaborating with Juno Reactor, who has given music for Hollywood films
like The Matrix. Hamiska claims that this collaboration expanded her notions on music to a great extent.
Being exposed to amazing audiences, playing at some of the biggest festivals in Europe was just the beginning, what followed was a once in life time learning experience. She has also collaborated with the very popular Prem Joshua for his album Kashi.

During all her travels, she got to meet some amazing musicians, one such being Amir John Haddad – an
incredibly talented multi-instrumentalist from Spain. She got a chance to collaborate with his band Zoobzar.

Talvin Singh, the talented and popular world musician based out of U.K also called her for a very beautiful song for the film Once Again which released recently on Netfilx.

From 2013 – 2015, she has been with an all women a multi-lingual folk fusion band called Indiva. “We definitely had so much fun travelling with our music,” concluded the ever enthused Hamiska.

Which is your all time favorite movie?

If you could live like a fictional character in real life, then who will it be?

If you could meet anyone in the world dead or alive who would it be and what would you say to them?

If you were stranded on a deserted island, what three items would you take with you?

If you were God for a day, what changes would you make to the world?

MAKE PEOPLE BELIEVE IN JUST ONE RELIGIONHUMANITY. THAT WILL AUTOMATICALLY SOLVE EVERY PROBLEM.

If you could ask a sage any question that you want to know the answer to, what would you ask?

You’ve been interviewed so many times-What’s the one question you wished someone would have asked you, but never did?

WHEN AM I GOING TO SING A MIND-BLOWING DUET WITH A.R.RAHMAN AND AMIT TRIVEDI

What things in your life would you give up in an instant if it got you to an even better place than you are now?

What things in life is still a mystery to you?

NATURE IS SO MYSTERIOUSLY BEAUTIFUL.

What things have you learned about life and the human condition from being a celebrity?

AS A CELEBRITY, I WOULD LIKE TO SAY, DREAM BIG!! AND EMBRACE EVERY OBSTACLE GRACEFULLY.

Is there any special someone in your life?

Which is your dream destination?

What has been your guilty pleasure in life?

ONE LIFE …. DON’T LET GUILT COME IN THE WAY OF YOUR PLEASURES