in Men Leaders to Look Upto 2020
Reading Time: 3 mins read
0
A A
0
0
SHARES
12
VIEWS
Share on FacebookShare on Linkedin

A Daring Changemaker with a Humble Beginning

Dana Stoner-Blech once said, “Starting from scratch is often the best thing for a bright future.” Founder of Vrajansh Smart Spaces LLP, Hemen Joshi, is a precedent of starting from scratch to build a bright future. As daring as it sounds, it is true. Not born in an entrepreneurial family, Hemen decided to create a future of his dreams. Being from a family that learned to survive, he knew he wanted to change things, and he did. Now that he has, Hemen doesn’t stop dreaming, because he now knows the right equation to fulfill his dreams.

Nothing in life comes easy. Hemen’s passion to challenge himself, take the lead, create wealth, and withstand all difficulties wasn’t a cakewalk. Without any sort of resources no one dared to dream the way he did, and his guts and efforts have changed the way his family lives, thinks, and sustains.

Coming from a non-business background, Hemen’s take on a non-dominant leadership style is commendable. His life is an experiment, and he wants to be an experimental leader too who sets an example. Evidently, he has! Hemen disagrees with the notion that a leader is all about luxury, name, or fame. He found success the hard way and believes that a leader who doesn’t have space for creating confidence, trust, loyalty, and social security isn’t worthy of that position. “Every person who can take responsibility is fit to be a leader,” Hemen declares.

Staying flexible since childhood changed the way this man sees failures. All he did when he hit some bumps was follow the basic principles that one learns in school – keep working, stay dedicated, give space to the problem, and be a part of the team and not an individual lost on a battlefield. Taking risks and making spontaneous decisions is something he gets from his DNA, and he is unapologetically proud of this prowess.

Hemen Joshi has a very simple take on success. “Destiny and hard-work walk hand in hand. Our game-changing skills don’t make our future. Our qualities and destiny paint our way to success.” If every ambitious leader thinks in this manner, then destiny is sure to attract all the luck needed.

As a firm believer in the equal role of destiny and efforts, Hemen never allows negativities to take control of his temperament. He accepts that rejection is something that everyone has to drink like bitter medicine. But as for him, the strength to overcome rejections, and the anger, disappointment, mood swings, frustrations, and anxiety that comes with them isn’t a skill one can acquire. “It needs to come from within you,” he inspires. Hemen finds that his heart and soul are equipped with enough positivity to power through such situations without a fuss. 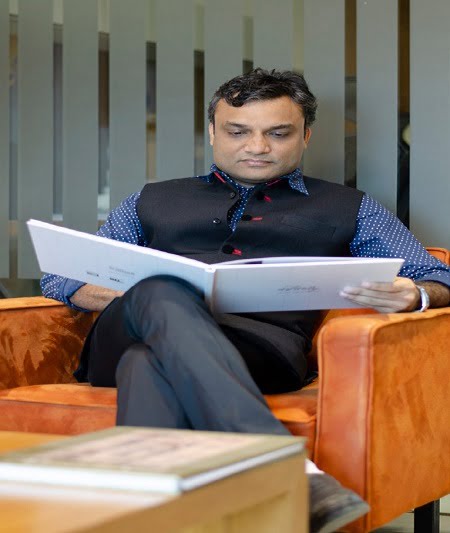 Life is easy when we take it that way. Hemen can’t agree more that even though humans find it hard to keep nervousness away, it is the best quality of one who heads a team. Compromising, staying down to earth, being accessible for employees & customers, honing a strong convincing power, and acquiring deep subject knowledge are some of his recommendations to become an influential captain of the ship.

Hemen’s best quality is his ability to think with balance. Neither does he feel that the youth lacks the skills of becoming a good leader, nor does he think that they don’t have it in them. In his view, some young entrepreneurs use education, their technical knowledge, adaptability, and focus to mark their place in the competitive market. On the other hand, he agrees that a group of them allow distractions to ruin the future they could otherwise have.

The very grounded Hemen doesn’t leave out warmth and feelings from his professional life. While he considers deadlines a significant way to measure a person’s strength, he doesn’t believe in unachievable targets. Sometimes, some projects do require one to overwork for a small phase in life, but Hemen believes that a leader can re-energize them with the right words, some warmth, and the feeling of togetherness. He elucidates how sharing what the employee is worth encourages them to stick by in good and bad times.

In the future, Hemen Joshi wishes to expand the way he visualizes the real estate market. With the world shifting to online methods of working, he trusts that there is a better scope for every industry if one understands the right strategies. “I don’t want to create a branded land, but want a place in every customer’s heart.”

Patrolling walls to optimize groundwater level, using state-of-the-art machinery to avoid pollution, and the use of solar panels to reduce the consumption of electricity are some ways in which Hemen Joshi contributes towards the environment.

Someone like Hemen Joshi reinstates our faith in how dreams fall into place, even with humble beginnings.