in The Most Admired Global Indians 2019
Reading Time: 4 mins read
0
A A
0
0
SHARES
26
VIEWS
Share on FacebookShare on Linkedin

Dr. Srimathy Kesan, founder and CEO of Space Kidz India, a science and technology incubator. Shares with us her story of Bridging the gap of Space Exploratory Research by Young Scientists.

Its not rocket science, the figure of speech used to describe simplicity has been altered by Dr. Srimathy

Dr. Srimathy, the Founder & CEO of “Space Kidz India” (SKI), a leading Science and Technology incubator, is helping children reach out to the stars, quite literally. Launched in 2011, Space Kidz India has designed and pioneered multiple programs that are aimed at creating the next generation of scientific thinkers in India.

She is the only Indian to be decorated with the Ambassador status to the top 3 Space centres of the World, NASA, ESA, and GCTC – Moscow.

It was not easy to disrupt the mundanity of the Indian education system so Dr. Srimathy came up with an alternative approach and introduced the concept of “Space Education”. Her unique programs were aimed at grooming and nurturing young scientists. Apart from taking children to the research centres for hands-on space training, rocket & satellite building and launching techniques, she also invited Cosmonaut Salizan Sharipov (Director of Yuri Gagarin Space Centre, Moscow), Astronaut Marsha Ivins (NASA) and Retd. Wing Commander Rakesh Sharma (the only Indian Cosmonaut) to meet and share their space travel experiences and influence these aspiring young scientists.

Dr. Srimathy’s ultimate goal is to lay the foundation for a World-renowned Space University with manufacturing port in India. 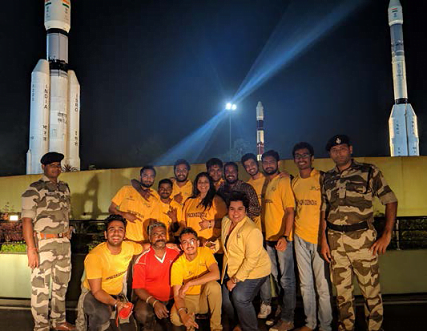 In order to achieve her primary goal of creating young scientists and leaders for the country, Dr. Srimathy has designed several initiatives to motivate young talent through annual contest for high school and university students. “Young Scientist India”, “Youth Icon”, and “I4 India – Innovate for India are some of the key initiatives. Her dream first came true in 2015 when her SKI team of young scientists built and launched NSLV.KALAM.1, the 1st ever “Near Space Launch Vehicle, NSLV; Later in the year, A Balloon Satellite which was propelled into the stratosphere, broke The Limca Book Of Records for being the first student team to launch a high altitude balloon from India that reached an altitude of 1,07,000 feet successfully. Subsequently, SKI has successful launched 9 NSLV’s from different parts of India, a feat for which many international universities have collaborated with SKI to launch their satellites including NSLV 3 on July 25th, 2018, NSLV 4, on July 26th, 2018 and on 25th Aug 2018 “SKI – NSLV- 6”, a giant balloon, twice the size of the Empire State Building, NY, from NASA’s Columbia facility. Recently, on April 21st 2019, team SKI collaborated with “Periyar Maniammai Institute of Technology” an “All Women Team to launch a high-altitude Balloon Satellite” that got them registered in the Asia Book of Records.

A travel and tourism management student, Dr. Srimathy was awarded an honorary Ph.D. in “Education through Travel” by Cosmopolitan University, United States. She has been appointed as the Planning Board member of Mother Teresa University, Kodaikanal. Dr. Srimathy the philanthropist is sought-after
to deliver motivational speeches at various schools, colleges, corporate houses and NGOs.

Apart from Space Education, she has also devoted to promoting “Education through culture”. Dr. Srimathy believes that art plays a major role in the assimilation and synthesis of learning. Her brain child SKI created history during the 2012 Olympics by becoming the first cultural unit selected from a prestigious list of 22,000 artists to perform at the London Olympics. Additionally, SKI has hosted numerous cultural events in India, Canada, and the USA. 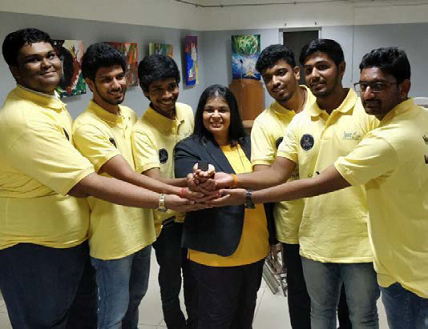 She actively supports several juvenile homes in Chennai and conducts aeromodelling and computer workshops for their children and helps them with supplies, medicines and infrastructure requirements. Through constant counselling and motivational speeches, she works on their mental conditioning and improving their self- esteem.

Dr. Srimathy has been an all-rounder at school and college, representing & winning the State of AP in Basketball , badminton and athletics at state and national levels. She was very active in NCC as well. Her
unmatched efforts have not gone without being noticed; she has been recognized and bestowed upon with many awards & accolades such as “Pride of India”, “Social entrepreneur” and “Woman Achiever”. Some of her many awards & accolades include: