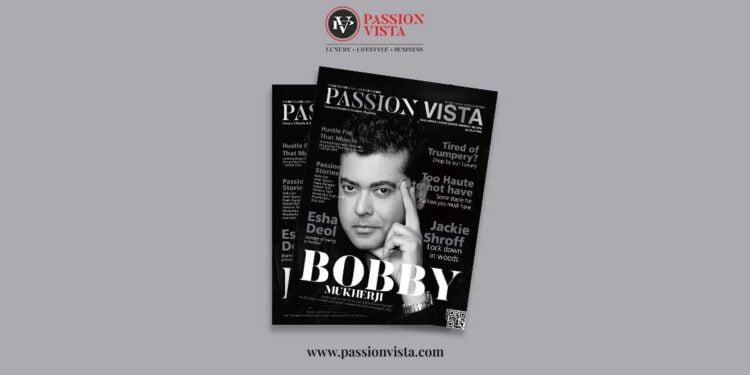 in Cover story
Reading Time: 6 mins read
A A
Share on FacebookShare on Linkedin

Bobby Mukherji is the most luxurious architect of all times and is the 1st Indian interior architect to be on the panel of top 5 star hotel brands.

Having his family in showbiz and having done 27 ads in his teens, Bobby Mukherji turned the table around and embarked his avenue in building awestruck structures & spaces across the globe. As Mr Mukherji says that it was a lesser risk for him in becoming an architect than being a showman architect/designer as he was a very talented child artist having won every possible child art competition…

Let us dwell in deep towards his love for his soil and his prowess to deliver the untrodden style of an architect.

Bobby Mukherji was born in Calcutta and brought up in Mumbai, the city of dreams for most people in India, where he completed his education from Bombay Scottish School. He had received great support from his college principal to overcome his disability of dyslexia and later from his friends in the initial struggling days of his career. He has taken his training in architecture from Manhattan, New York. Today, Bobby Mukherji is the 1st Indian interior architect to be on the panel of top 5-star hotel brands. He is also known to be the topmost luxury architect in India and sub-continent with his wide range clientele being top 5 star hoteliers, real estate developers & private residences.

Coming from an artistic background, Bobby Mukherji was always fond of art, so much so that it wouldn’t be wrong to say that art was in his blood for not only were his parents’ theatre artists, his forefathers were profoundly rich in different art forms too. “I have my ancestral history of the past 600 years which, through centuries, has produced artists, writers, poets, novelists and educationists. So, whatever I am today is because of their imprints in me,” says Bobby.

Bobby was able to break the barrier of designing for top international hospitality brands which earlier went to only international designers and architects from the USA, UK, Singapore and Hong Kong. Today, he is competing with design firms for creating iconic super luxury projects in their own territories in the same countries and regions.

“Architecture is an amalgamation of interior design, landscape, lighting design and more, where I can play all the senses. I like not to design aesthetically but also give a feel to resulting in where I can tease all the human senses. These land up into highly successful projects for my clients”.

You cannot become a good architect if you are not a good artist.

One cannot be a successful architect if one is not a good artist as artists envision their art on paper, and so does the architects. In addition to artists, architects have to visualize everything in 3 dimensions.

His firm, Bobby Mukherji & Associates, was founded in 1993 when he was in the 2nd year of his architectural studies. At an early age, he became the first and perhaps the only Indian architect to have designed a whole new city since independence. It was a project worth USD 2 billion.

He is the master planner of Aamby Valley which is one of India’s finest developments at a size of 10 thousand acres. An international competition

He is the master planner of Aamby Valley which is one of India’s finest developments at a size of 10 thousand acres. An international competition to redesign Le Meridien, New Delhi, saw him not only competing with the stalwarts in the field but eventually winning the project! “This marked our foray into hospitality in a big way. It gave us the confidence to take on projects of that nature and scale. They were also significant public showcases for the practice,” remembers Mukherji.

His design philosophy is guided by a combination of innovation, pragmatism and excellent design aesthetics. Appreciation for his design sense, which often fuses classic design elements with a contemporary approach, has taken him the world over, from The Middle East, Thailand, The United Kingdom, The USA, Indonesia, Bhutan, China, New Zealand, Caribbean Islands (British West Indies), Maldives, Seychelles to Nigeria, among others. “As a practice, our design language is pluralistic in nature. We believe that design is an organic entity, which should speak to the soul, even as it reflects a global outlook… We are devoted to creating unique experiences, environments and cityscapes for the end consumer,” he says.

You being such a busy personality, do you design the entire project on your own?

Initially yes, I used to do everything myself, but now it’s not physically possible. However, I have a partner, Miss Paulomi Shah, a great asset to BM&A, junior associates and senior designers, all involved in materializing my vision. There are thousands of craftsmen working together as a strong team which is imbibed by our work ethic that I learned from my western experience. It is imperative to have a strong support system who understands your vision and enforces the same. I am glad; I have one.

What challenges did you encounter while building the Aamby Valley?

To design this city is not the same as designing a single building on a plot of land. It’s a canvas of 10,000 acres of hilly terrain; to carve out grand lakes, road networks, forests, a golf course, residential communities, commercial and hospitality zones and a mini airport with a runway is like sculpting a land into a city. In those days, to produce my art in such a large format, I required ISRO satellites to capture the images of the whole terrain. I would need the same images which you see in Google maps today. I needed 8 shots to visualize the whole terrain, and I still remember, it cost me about 30,000 INR for each shot. We used helicopters too to understand the terrain better to see it all, but well, somehow, we managed. And today, on completion, it is considered to be one of the best towns of India to live in.

Any nasty experience you dodged that you would remember for life?

I came back to India, thinking I would design many such cities, but it did not go my way. I lost the contract to the lowest bidders to redesign the new capital cities of Raipur and Ranchi after the formation of new states. The tender went to a price which could not even cover half of my designing cost. It was a bad experience and great learning.

Do you remember your first project till date Mr Mukherji?

Of course, I did the first major project that has been closer to me as I got it at an early age which was a 5-star hotel – Le Meridien, New Delhi. It was a 350 cr renovation project. And it’s interior design services I won through an international design competition against the topmost international hotel design firms.

What is your connection with the soil and designing?

Very deep, to be precise, I soak myself to the culture and environment where I understand the requirements of the projects. We use local resources, local material, local art and glorify them in a modern setting. This practice always gives me successful results. For instance, when I made the Jaipur Marriott Hotel, it was presumed to be of the typical Rajasthani palace format. To their surprise, I gave them a city slick hotel using local Rajasthani materials, giving it a sense of a place so that the tourists would relate to it. Later, it became the most successful project of Rajasthan and became a favourite watering hole for the locals.

I want to be remembered for my work. I wish to make excellent residential designs at affordable costs where every class can enjoy a living standard, a dream for which I came back to India. I hope the Government would propose such a plan where I can contribute with my knowledge and skill in creating a better living environment.

What does Bobby Mukherji do in his free time?

I still paint at my studio. I mainly paint for myself and some of my projects. I wish to do an exhibition someday.

Every artist has a style of its own, what is yours?

Abstract with a bit of surrealism that is inspired by landscapes.

Who is your Inspiration?

The world has created great masters right from ancient times to look up to. They all inspire me for being ahead of their time; Leonardo da Vinci, Michel Angelo, Mies Van Der Rohe, Le Corbusier, all of their work required a high level of precision and dedication to achieve the beauty which we see today.

The most embarrassing memory that you remember till date…

Hahaha… I have a memory which is a combination of being funny, embarrassing and deadly at the same time. When I first travelled abroad, I had left my bag pack unattended at the airport gates to roam around the Charles De Gaulle airport. When I came back and sat next to my backpack, I was amused to see that the entire terminal was empty as they thought that the unattended bag might have contained a bomb. When I claimed the bag was mine, the cops abused the shit out of me as the bomb squad was already on its way. The rest you can imagine…

What is your biggest pet peeve?

Lack of professionalism and mediocracy among people in our country which I believe is because of the quality of education being imparted presently in India.