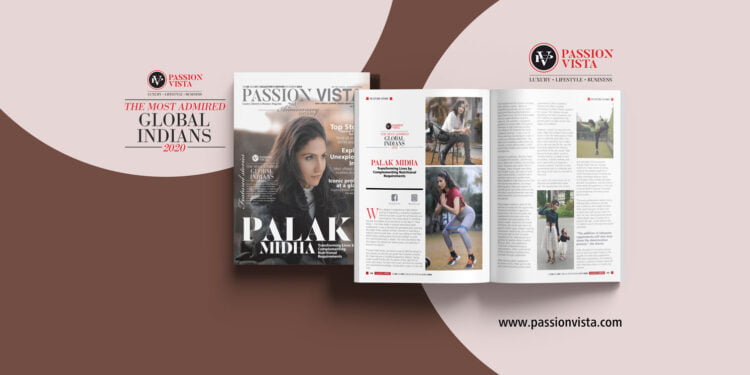 With a degree in engineering, Palak Midha’s journey of becoming a successful Supplement Advisor has been a quest for self-discovery and reconciliation. Her innate desire to contribute towards the welfare of society led her to the idea of “Palak Notes,” a firm that deals in uniquely formulated health supplements. It was a concept that generated after watching the plight of the sufferers and her intention of extending a helping hand towards them. As she was willing to heal them, Midha began reading about food and nutrition to nurse the malnourished back to health. The more she delved into the subject, the greater her interest grew, and gradually, it became her passion.

Through Palak Notes, she found a way to fulfill her dream to help people, as now she can guide them towards a healthy life. Palak became a Certified Supplement Advisor. Having made herself familiar with the power of the right kind of food, right doses, the right time to eat, and from her learning and experiential knowledge, she decided to take it to the next level.

It all started with her arrival in Germany after getting married. Being an engineering graduate, she secured a good job three-hundred kilometers away from home. Her first responsibility was as a sales electronic engineer. Later on, she worked in managerial positions at various MNCs throughout Germany. A tight working schedule only allowed her breathers for some weekend evenings. It was in one of those evenings she decided to invest in a start-up company called Rakhi. The idea was to develop a safety device for women, a band with an alarm, which would help females alarm people during emergencies.

Despite its usefulness, the band failed to impress the investors, and the idea met a dead-end. However, during those times, Germany saw a great influx of refugees. These refugees were ailing from health issues, and many of them were malnourished. A woman with a sensitive nature and a golden heart, Palak decided to help them recover from the trauma and ailments. She began learning about food and nutrition to provide good care to the malnourished. And this is exactly where her heart and mind reconciled, and she bumped into her passion.

Palak always wanted to work for the welfare of society and this opportunity served her intentions in geometric proportions. Her first encounter with supplements took place when she shouldered the responsibility of her family’s health. Every time she would call home, she would hear about her parent’s health issues. Despite receiving mainstream medical care, the suffering continued with no form of respite. Appalled by this, Palak owned up to guiding her parents about a healthy lifestyle, diets, and supplements. They both showed encouraging improvements, which convinced her of the importance of getting extra nutrients through supplements.

After learning about supplements for three months, Palak quit her job and started educating people about supplements & their importance. Presently she offers complete mentoring on healthy lifestyle adoption for women. This initiative includes everything from diet to exercises and from wellness to supplements. Her primary goal is to make women feel happy and confident.

However, it wasn’t an easy choice to make. Palak had to depart from a point where it took her twelve years of hard work to reach her destination. She had to start everything from scratch as this area was new for her, and she had barely explored the immense possibilities of this new world. Palak learned to shoot videos, to start a YouTube channel, to speak in front of cameras, to build a website, and most importantly, to inaugurate a company overseas. She had so many quintessential tasks to undertake and give wings to her idea, but she had no resources.

As a result, she came across a lot of obstacles and problems but never quit. She squared each one of them, and ultimately, she became the change maker that she intended to become. Palak started by selling uniquely formulated supplements online throughout India. Presently she writes informative blogs on health and lifestyle, offers suitable diet plans, provides consultations, and also offers a wide variety of supplements. In the end, it was all worth it because she ended up accomplishing a lot during those glorious years.

The young entrepreneur regrets having followed other influencers and the lack of self-trust she initially sheltered. Palak could manage it all alone and crossed roads with success when she did it her way. She is passionate about adding fifteen years of quality life in people’s life span, as she believes that it’s viable to identify the declining health parameter.

“The addition of adequate supplements will also slow down the deterioration process,” she shares.

Palak, through her innovative venture, aims to serve the Indian market as the supplier of world-class supplements. With these supplements, she wishes to transform a person’s lifestyle supported with informative videos on health and exercise.