It’s said that, there are a few people who have the energy to work passionately and there are some who have a vision for its growth and excellence. But very few special ones, carry both these qualities simultaneously and we call them the emerging leaders of tomorrow. Dr. Rupesh Tatia, an honorary doctorate from North American University at Los Angeles, U.S.A has proved that as the two sides of a coin, both hardwork and foresight are an essential combination for success.

Being the youngest in his family, he was always pampered. A post-graduate in Business Administration at Bihar University, had a keen interest in sports like swimming, badminton, table tennis, rather than only academics. His life partner is Mrs. Archita Tatia, an educationist, and two children, Shagun and Jatin.

Rupesh stepped into the world of business, soon after completion of the MBA. Since the onset, he explored various ventures like supplying water pumps in PHED waterworks; selling shirts and more. Eventually, he opened up a small food truck serving burgers and sandwiches at one of the premium hot spots of Jodhpur. He also packed tiffins and small meals, delivering them to offices, and homes on a two-wheeler to sustain his food van expenses. His passion for the food-service industry continued to grow, from his small food-truck venture towards establishing a large food catering company. Soon, with a modest team of 5 people, he commenced ‘Shubham Caterers’ – providing to small-scale functions and events.

These baby steps turned out to be a huge success, as he became the desired choice for they offered an exceptional taste, consistent quality and a reliable vendor for in-time delivery. As the business expanded,
Rupesh got offers for larger weddings in Jodhpur, he served them extremely well. People noticed his creativity for the food stalls, his approach with his team, and personal touch with his clients. His foresightedness, combined with waste management steered him towards prosperity. Before long, his catering business Shubham Caterer’s soon became ‘The Grand Shubham’ and rapidly advanced to other cities like Mumbai, Chennai, Baroda, Ahmedabad, Jaipur, Udaipur, and more.

He recreated the taste and vision of Indian cuisine, depicting that catering is not only about the taste but also about the beauty of serving it. Then came a turning point to his food business, when he observed a lot being wasted in large events, weddings. This motivated him to retort to the packaged food industry. He researched on preserving food, from knowing little about the chemistry of food, to setting up a state-of-art plant, that caters to the Ready-to-eat Packaged food industry. 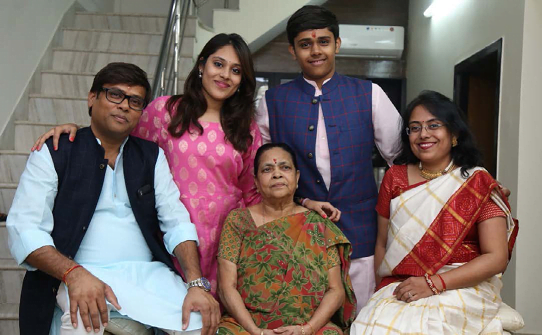 Today, TGS Foodz manufactures a wide range of Ready-To-Eat products – Dal Makhani, Palak Paneer,
Paneer Butter Masala, Pindi Chole, Rajma Masala, Sarson ka Saag and more. The products are in a league of their own – the fragrance, aroma, and taste are unbeaten and the freshness remains sealed for up to 18 months. Through TGS Foodz, Rupesh continues to expand his business globally to Japan, the U.S.A, the UAE, South Africa.

He has been garnered with ‘The Best Catering Award’ by the Event Management Federation EMF of India for two consecutive years. He is also a featured speaker and an inspiration for his excellence and contribution to the food industry.

Rupesh expresses, ‘Change in the government policies for the Food Industry has led to mass registration of emerging catering companies. It also encouraged billings and tax payments from the company. I aspire to provide a livelihood to 2000 families by 2030.’