in Blogs, Travel
Reading Time: 2 mins read
0
A A
0
0
SHARES
21
VIEWS
Share on FacebookShare on Linkedin

The undulating mountains and verdant fields welcome the new visitor to the breathtaking splendor Sri Lanka has to offer even today after so many centuries of recorded history.

Sri Lanka has a recorded history spanning over 2500 years and is the country to 22 million people. The island was named Sri Lanka in 1972 after it attained republic status. Sri Lanka is an indigenous name meaning the ‘resplendent island’. The Greeks called her ‘Taprobane’, the Arabs named her ‘Serendib’, and the old colonial powers of Portugal, Dutch, and Britain called her ‘Ceilão’, ‘Zeylan’, and ‘Ceylon’ respectively.

Sri Lanka is a country full of varieties and with strong religious and cultural beliefs, amazing mountain sceneries. A coast line full of varieties from the traditional fisherman, villages to hip party beaches, to snorkel/dive/surf to simply peaceful beaches.

Apart from scenic beauties, Sri Lanka offers a wide range of traditional and Ayurvedic healing centres, spas and resorts to provide many options to reenergize and relax for those desiring natural therapeutic modalities. The Ayurveda system of healing believes in treatment of not just the part affected by the disease but the individual as a whole. It emphasizes on the harmony of mind, spirit and body in curing the body and focus is on prevention rather than cure. 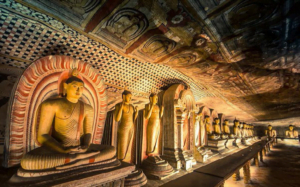 King Dutugemunu is well reputed to have built many hospitals and put dispensaries in very village of size. King Buddadasa (c. 3rd AD) is credited with the saying “If you can’t be the king, be a healer.” King Buddhadasa carried out great feats of surgery on humans and animals, including brain surgery.

A tour within the Cultural Triangle will help you understand the ancient Buddhist Culture of Sri Lanka and the intense devoutness the natives demonstrate.

The Cultural Triangle is concentrated with many Buddhist Temples, Sculptures, Ancient Monasteries and Stupas while some of them date as back to over 2000 years. The area also covers some of the UNESCO World Heritage Sites including the ancient cities of Anuradhapura, Polonnaruwa, Sigiriya, Dambulla and Kandy. There are a number of monolithic rock formations that are have been ideally transformed into places of worship.

Prof. Dr.Lakshman Madurasinghe is an Attorney-at-Law and Behavioral Scientist with wide local and international experience. He is the Director General of World Peace and Diplomacy Organisation, Vice Chairman for Asia, in Asian African Chamber of Commerce and Industry and Chancellor of Hebron Eco University. He has authored 4 books and is the Editor of the forthcoming “Who’s Who in Sri Lanka” to be released early next year.

The House of marigold