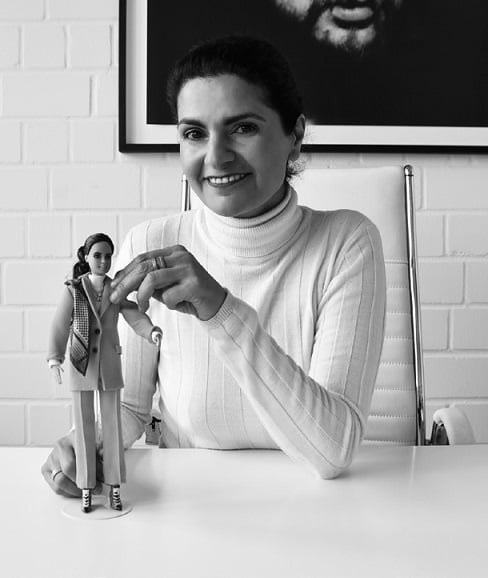 A DREAMER WITH BOTH FEET FIRMLY ON THE GROUND!!!!

Leyla Piedayesh (born 1970) is a German fashion designer and founder of the Lala Berlin fashion label. She was born in Teheran. Piedayesh founded Lala Berlin in 2004, originally as a knitwear brand. The line expanded to include a full range of fashion for women, including accessories and knit jackets.

Today, thirteen successful years after being established in 2004, Leyla Piedayesh and lala Berlin have made a name for themselves internationally, too.

“I don’t mull over the past, and I don’t lose any sleep over the future, I try to live in the here and now.”

In the airy industrial space, models wore slinky dresses with interlocking lace and silk panels, oversized silver zoot suits and crisp, oversized coats featuring pins directing viewers to be “be wild and do something nice.”

What inspired you to keep to a strong – black, white, red, blue – palette? What do those colors mean to you now?

Strong and bright colors are vey important in life. For this season, I wanted to keep it simple. I was in a quite dark mood when we started working on this collection. I was heavily influenced by Berlin’s punk scene from the late ‘70s and I felt that I wanted to concentrate on only a few colors. Black and white are very important here while red and blue add needed contrast.

Fashion has become an industry in Berlin. The fashion week twice a year is a big influence for everyone who has an interest in fashion. Of course Berlin’s women aided that development. They become more ambitious and have higher demands on shapes and quality. This works for me, since a high standard is important for me. It is symbiotic development between designers and the city’s women.

How do you imagine your clothes being worn?

That’s simple: you can wear my collection everywhere and anytime. But you have to choose the right look for the right occasion. The baggy pants with sneakers work for a day look on the streets but the leather pants with a cool sweater are better for dinner and a lace-silk dress goes to an after-party.

“And sometimes even something as simple as looking at the sun and taking a deep breath is enough to set your spirit free.”

Why include lettering in the collection? Tell me about the particular phrase…

The words translate into “be wild and do something nice.” An old photograph that I found of graffiti in Berlin from the ‘80s inspired us. It is such a strong and powerful sentiment. When I saw those words, I fell in love immediately—the sentence seemed to come from the bottom of my heart.

“The stories at MTV were all practically identical. Except for Billy Corgan and Sade – I thought they were amazing. Those two certainly made an impression on me. And Kylie Minogue had something special, too. She was really sweet and there was a certain depth to her. But the rest…? Extremely superficial.” Leyla Piedayesh needs substance, and her quest has led her to where she finds true inspiration: within herself.

Sure, I can get enthusiastic about things sometimes, too. It’s just a little more difficult if you’re as pragmatic as I am.