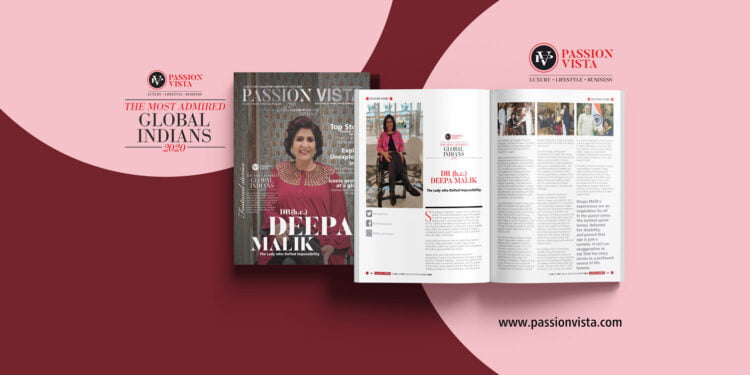 The Lady who Defied Impossibility

She endured a nightmarish ordeal, only to wake up to another. Her world shattered at an age when people fix their life goals and set pursuit to meet them. Any ordinary human could have easily lost their wit, but not her! Suffering from Below Chest Paralysis was her fate but rising and challenging the circumstances and her disability was a choice. Her paralytic condition confined her body to a wheelchair, but she couldn’t restrain her soul & spirit from taking the flight of her dreams.

A decorated sportswoman, who has added many feathers to her hat, Deepa Malik is the first-ever Indian women Paralympics medalist and a proud recipient of the prestigious Khel Ratna, Arjuna & Padma Shri Awards.

Besides all her work and contributions towards the development of sports and empowerment of women in India, her NGO “Wheeling Happiness” works for the welfare of the differently-abled, economically abandoned, and the women of the society. Having experienced all the challenges that a disability accompanies, facing stereotypes, and having seen her daughter go through the same struggles, she took the issue of enabling the disabled as a social responsibility. Deepa performs this duty with her daughter’s support.

Sports served Deepa as a tool to spread awareness that one can achieve anything they aspire to, and disabilities aren’t a hurdle unless you let it become one. Hurdles are just brief hauls, not impediments. Having said once, “Sports goes beyond competition. It’s more about a means for fitness, self-esteem, and a healthy identity despite a disability.” She dramatically quit her own eatery business to pursue sports. To recognize Deepa’s dedication towards sports and adventure, the ITM University (Gwalior) honored her with an Honoris Causa Doctorate.

Her extraordinary strength, resolve, and ability to withstand the odds helped her conquer insurmountable feats like creating an Asian record at the Incheon Asian Games (2014) and the Asian Games (2018). Deepa also bagged a silver medal at the Rio Paralympics 2016. Surprisingly she is the only Para-athlete to have a consecutive streak of winning medals at three Asian Games (2010, 2014 & 2018).

A woman of strong character, Deepa doesn’t appreciate sympathy as she believes that it makes her look like a weak and helpless person. She is the first-ever paraplegic women biker, swimmer, and car rally participant of India who has registered four Limca World Records in her name. She maintains in all dignity, “People will look at you the way you look at yourself. I never wanted people’s pity or sympathy. I wanted to be empowered. I wanted people to help me in a way that creates opportunities for me rather than feeling sorry for me.”

Last year, Deepa concluded her competitive sports career with utmost content with twenty-three International medals at various events. She also represented India on various platforms. Having quit “competitive sports,” she was later elected as the President of the Paralympics Committee of India and was appointed as a member of the Government’s All India Sports Council. Deepa is known for working closely with the government to introduce better sports policies for the physically challenged.

Being an acclaimed motivational speaker, she strives to influence students, women, sportspersons, and physically challenged with her powerful voice and friendly interactions. Deepa frequently visits educational institutions, sports institutions, and other such organizations for the same purpose. She believes that learning never stops. Even if one is a Paralympics medalist, they can learn new things every day from anyone. It just doesn’t end. Being an army brat, committed, and dedicated, work holds paramount importance in Deepa’s life. The sense of patriotism evokes in her a sense of pride after winning a national game and seeing the tricolor ascend.

Her perpetual habit of committing towards setting new goals and eventually achieving them serves as a source of inspiration for many (especially women). The International Paralympics Committee conferred Deepa Malik with the title “Women of the Year” in 2019 on Women’s Day. She has also worked as a citizen ambassador to New Zealand and was appointed the Prime Minister’s Sir Hillary Fellowship by the Honorable Prime Minister of New Zealand, Jacinda Ardern. Deepa also received the President’s National Role Model Award in 2014 and the President’s First Ladies Award in 2018.

Her ability to reconcile between myriad responsibilities is incredible. Deepa holds the office of the President of the Paralympics Committee of India, oversees the work of her NGO, works for the All India Sports Council, and also handles the PR and Grievance department at Haryana’s Real Estate Authority. All this without compromising on her family responsibilities and other commitments!

Deepa Malik’s experiences are an inspiration for all in the purest sense. She battled spinal tumor, defeated her disability, and proved that age is just a number. It isn’t an exaggeration to say that her story serves as a profound source of life lessons.