Pani puri fondly known as “puchka” in Kolkata, “gol gappa” in North, “paani patasha” in Madhya Pradesh and Rajasthan, “gupchup” in Jharkhand, “pakodi” in Gujarat and so on is favourite snack of most of the Indians.

Everywhere in India it is eaten by all in different style and flavours. In Punjab, potato is boiled and with little salt and lal mirch, it is served. Water is also usually sweet in taste.

Contrary to that, in Gujarat, particularly in Ahmedabad, the masala is made from boiled potato, chana and coriander. Salt, and chat masala is added in a good quantity making it a little spicy. If someone wants less spicy then there is meethi chutney which is added in the puri before mixing water.

Ahmedabad had been always ahead of having different types of flavours for pani puri. A decade ago only, there were various pani puri stalls/ hawkers which used to serve 8 varieties of pani
puri. With time, new flavours have been added. Flavours like pudina, hajma hajam, ginger, tomato, lemon, garlic and of course regular are served by the hawkers. People in Ahmedabad prefer having pani puri from a stall because of the low cost and the variety and spices but then there are many sweet shops which also serve pani puri which is liked by everyone example in gwalia, bikanerwala, sweet corner, etc.

Around 2 years ago, there were cases found in Ahmedabad wherein people realized that the hawkers are not using hygienic water and potato masala. Media also covered such incidents and as a result of it, a proper check has been done since then and people have also become careful of checking the hygiene before having it. The phase of mineral water flavour came and people started preferring that over other hawkers. Recently, automtic pani pri centres/ outlets also started.

In every lane of Ahmedbad, one can find a stall of pani puri. So it becomes very important that an Ahmedabadi checks the hygiene before having it and also the hawker serves good quality pani puri.

Recently, automatic pani puri centres/ outlets also started. At such outlets, water comes automatically from the machine and one can choose what type of water he/ she wants to have. The customer gets a plate of puri with masala and the only thing he has to do is to select water of his/ her choice from the machine. This is a step taken towards having hygienic pani puri in a clean environment. This type pani puri is available at Shivranjani cross roads.

A month ago or so, a place known as “Nautanki” has started on Drive In Road which offers 9 varieties of flavours which includes a flavour like manchurian.

Few of our favourite stops for pani puri is Diwan centre(shyamal char rasta), Manish pakodi house (Near Surdhara Circle, Drive In), a stall near vastrapur lake which serves 8 flavours of pani puri.Craze of pani puri is such that, that khakhra of pani puri flavour is also available in the city. So technically, if a person craves to have pani puri at an odd time, he/ she can fulfill the craving by having the khakhra. 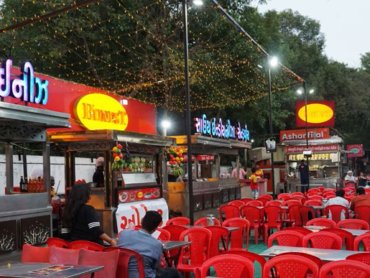 “One cannot love well, sleep well, live well, if one has not dined well” Something that we amdavadis... 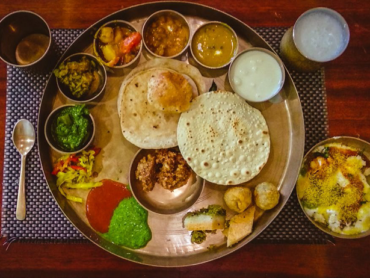 How I Met My Food, a platform by Deevangana Goyal and Kirtika Chetiatwo passionate foodies based out of...