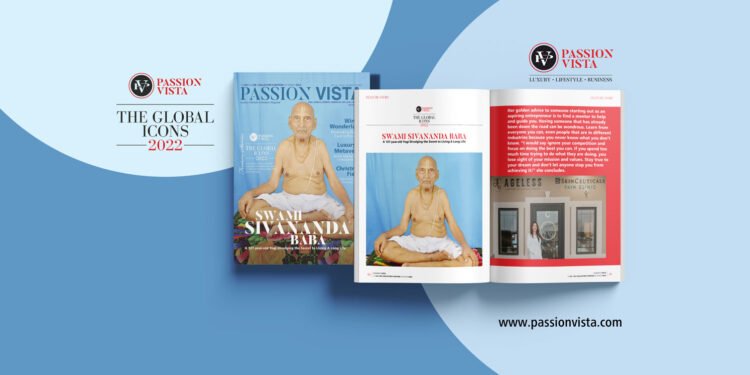 in The Global Icons 2022
Reading Time: 5 mins read
A A
Share on FacebookShare on Linkedin

A man who has defied age with the aid of his yogic practice is not only a paragon but a legacy of a lifelong commitment to humanity. Swami Sivananda is a 127-year monk who was born on 8th August 1896 to a famous Bengali Brahmin Goswami family in the Sylhet district is a true exemplar of the age-old wisdom that proper exercise, food and a stress-free life are the cure to all diseases. He is not only the oldest living person in the world but also the happiest one with the mission of making the nation healthy. Babaji is the 10th descendant of Thakurbani, who was a great saint in Sylhet, a few centuries ago.

His early life was full of hurdles as he lost both his parents at the young age of six years old and was living in abject poverty where the main thought of the day was one square meal. Even his elder sister died of starvation a few days before his parents’ death. His parents were beggars and could only provide him with rice water and hardly any rice up to the age of four. Soon after he was given shelter in his Guruji’s Ashram at Nabadwip in West Bengal, where he began his spiritual journey with the guidance of Guru Omkarananda Goswami. He taught him all the important life lessons and worldly wisdom without ever being sent to school. It was his spiritual, mental and physical enlightenment. It is also there that he learned the ancient practice of yoga and since that time has preached it all through his life.

Even after so much hardship, he never lost faith in humanity and always strived forward with a positive attitude as a realisation dawned on him that ‘The world is my home. Its people are my fathers and mothers. To love and serve them is my religion.’ With such strength and resilience, he made it his life’s mission to serve the underprivileged and impart the same wisdom that he has learned from his journey. With an undying faith in God, he travelled to different parts of the country from the northeast to Puri in the south and Haridwar in the north for the upliftment of others.

Babaji was sent by his guruji to London in 1925. He preached the art of living in all its dimensions and exemplified it in his life. Swami Sivananda is like a pole star which will show path and direction not only to this generation but also to future generations. He always believed that selfless service is the golden way to god’s realisation. His guruji called him back to India in 1959.

In 1959, his teacher and spiritual guru Omkarananda Goswami left the worldly abode which served as a personal blow to Sivananda Baba. He tried to come to terms with his death and cherish his guru’s memories forever, he started working selflessly with people who were suffering all across the length and breadth of the country.

In 1979, he made Varanasi (Kashi) his permanent home, where he started living reclusively but his aura of enlightenment shone and drew people towards him. He came to be known as Sadhguru who had the power to control all worldly desires and lusts. His sincere devotion to the almighty made him free from general ambitions in life including money, fame and power. He wholeheartedly was in a state of bliss which comes when a person has surrendered his soul and life to God and is awakened in the spiritual realm.

His daily life is a reflection of the dedication and undivided discipline that is almost impossible to achieve. He starts his day at 3 am and practices yoga, free hand exercises, and Pranayam for one hour. He also walks for one hour in the morning besides Japa, meditation, puja etc. He sleeps at around 9 pm and has boiled vegetables with rice every day and never takes sweets and oily fried food.

For the past 50 years, he has worked tirelessly by serving hundreds of leprosy-affected downtrodden people at Puri and does their ‘Seva’ by himself with utmost humility and even visits them in their huts. He treats them as his own and tries to fulfil all their needs be it food, clothes or basic necessities items. He radiates his goodwill around him and prompts others to join his endeavour to bring a change in their lives by sparking joy in their hearts in times of darkness.

His humanitarian work along with his long and healthy life has captured the attention of world media. His life and work have been documented along with several articles written about him by prominent media houses like BBC, History Channel, Times of India, and Dainik Jagran among others. He was also in the news for being the oldest person to get the shot of Covid vaccine during the pandemic and urged his fellow citizens to do the same.

His longevity has been subjected to a lot of interest by the medical world who have performed extensive health checkups on him to understand the uncorrupted body mechanism that has made him disease free. In a press conference which included doctors, management teams and media persons, he revealed his secret to a long and happy life by stressing the importance of a simple and tension-free life. He also demonstrated different yoga poses and exercises that he still does to this age which has induced the elixir of good health in him.

Swami Sivananda has been bestowed with multiple awards for his lifelong commitment to humanity and yoga including Yoga Ratna Award in 2019 and Basundhara Ratan Award by Respect Age International. He also become the oldest person to participate in World Yoga Day in 2019 by doing yoga demonstrations.

In March 2022, he was awarded Padma Shri, the fourth highest civilian award by then President Ram Nath Kovind for his compassion towards others and yoga practices. His photograph of bowing down to the Prime Minister dressed in a simple kurta and dhoti became an internet sensation. His gesture was seen as an act of unfound simplicity which made the Prime Minister bow down to this yoga legend as well.

He was also hailed by Prime Minister Narendra Modi during a session of ‘Man Ki Baat’ and said, “My dear countrymen, you must have observed Baba Sivanand Ji in the recently held Padma Awards ceremony. Seeing the agility of the 126-year-old, everyone must have been surprised just like I was…” He added “At the age of 126 years, the fitness of Baba Sivanand is the subject of discussion in the country today. I read many people’s comments on social media, that Baba Sivanand is fitter than that one-fourth his age. Indeed, the life of Baba Sivananda is an inspiration for all of us. I wish him a long life. He has a passion for yoga and leads a very healthy lifestyle.”

‘Daiba Kripay Rog Mukti o Samasyar Samadhan’ a book about his life and teachings was written by Ashim Krishna Pyne and was released by Swami Sivananda himself. A true yogi and philanthropist, Swami Sivananda Baba’s life is an inspiration to all that even in times of adversity a person can rise above and uplift others.