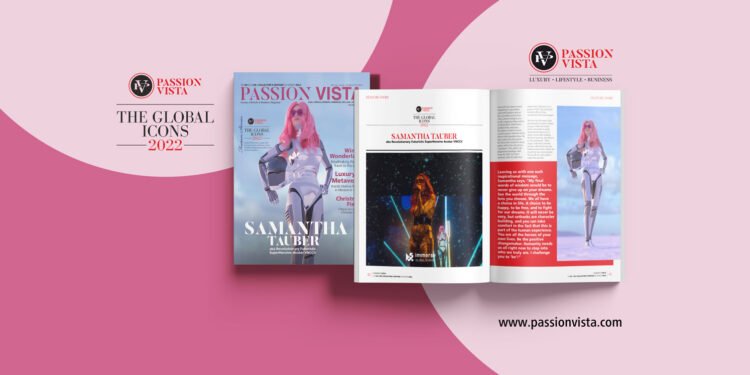 in The Global Icons 2022
Reading Time: 5 mins read
A A
Share on FacebookShare on Linkedin

Who is the real Samantha Tauber? She is an award-winning Australian multi-media artist, music producer, entrepreneur, thought leader, storyteller, live performer, and Chief Metaverse Officer for her company, VNCCII. She also acts live as her futuristic Galactic Metaverse SuperHeroine avatar VNCCII on the global stage both digitally and physically.

Samantha Tauber started off in the music industry as a singer-songwriter/live performer and later taught herself how to become a producer and multi-media content creator utilising both Ableton Live and Unreal Engine 5. “The biggest gift I’ve learnt from life is that you are always perpetually learning. This ‘growth hack’ mindset of experiential learning has driven my mission and vision for the VNCCII project,” she says. Being an auto-didact at the time of democratisation of technology led Sami to pioneer the multi-media creator path for the VNCCII project in the Metaverse and beyond.

The VNCCII story began in 2018 when Sami was energised by the prospects of the music industry converging with the gaming industry, and Hollywood for innovation in the Metaverse and beyond. She also loves strong female Superheroine characters in futuristic science fiction stories. To express her capabilities for multi-media storytelling, she created a virtual avatar character called VNCCII to spearhead all her creative work. VNCCII is a fictional futuristic galactic Super Sentient Superheroine character that is the lead protagonist for a science fiction Space A.I. Opera story that Sami has written. This IP is built for the Metaverse to create new stories via co-creation with the community and fans through real-time world building.

“I’ve always been passionate about empowerment and the power of storytelling to connect with people via emotions and to uplift the consciousness of humanity. This passion is the overarching higher order thinking that manifests in different ways across all creative mediums whether it is music, storytelling, visual art, futurism, gaming, or live interactive entertainment experiences,” shares Sami.

Her favourite personal achievement includes self-producing her debut Metaverse music album as well as the creation of her Space A.I Opera novel with a diverse cast of characters and Metaverse world building. This story complements her live interactive music entertainment multi-media show which utilises Unreal Game Engine, motion capture, and holographic technology with the purpose to empower and uplift the consciousness of humanity. As a phygital (physical + digital) model, Sami performs in real life cosplaying as her VNCCII avatar character, as well as virtually in an outer-space music amphitheater utilising virtual production such as motion capture and live broadcasting.

Her song ‘Level Up 2 Nirvana’ from her upcoming Metaverse album and science fiction novel, ‘VNCCII, The Soul Code, And The Battle Of The GALACTA.I.SSANCE’, released to a successful showcase with a Metaverse music video. In addition, she has created a vodcast show called ‘Future Humans’ where she communicates as VNCCII broadcasting live from Unreal Game Engine via motion capture. Some of the special guests and industry thought leaders featured on the show include Cathy Hackl (Godmother of the Metaverse), Amy Peck, David Hanson, Teddy Pahagbia, Hrish Lotlikar, Jamie Burke, Mike Pell, Spottie Wifi, and Krista Kim among others. A highlight Metaverse stage performance included her audio-visual live music stage show at Immerse Global Summit Europe in 2022.

Samantha’s journey has been a combination of hard work, talent, dedication, and intrinsic self-belief. Yet, it wasn’t without its share of challenges. “Some challenges that I’ve encountered so far for my business include carving out time to achieve all the tasks within the interdisciplinary priority decision matrix. As I’m crossing all the media formats such as novels, comics, music, live interactive entertainment, film, VR, AR, XR and gamified experiences, the challenge is in coordinating the overarching convergent strategy to have maximum efficiency and effectiveness,” she opines.

She has managed to effectively emerge as a trailblazer with recognition worldwide such as being featured among the Top 100 Women Thought Leaders of the Future for Metaverse and Web 3; Top 10 Personality Disrupting the Music Industry in 2022; the Most Dynamic Entrepreneur from the Entertainment Industry to Watch in 2022 by APAC Entrepreneur, as well as the next music Metastar by IPSOS 2022. Beyond this, she has been the most sought-after speaker at various conferences relating to the Metaverse, Web 3, and creative leadership across the globe such as SUPERVERSE Dubai, Immerse Global Summit Europe, NFTCon, NFT Show Europe, World Metaverse Show Dubai, Leap Conference, The Creativity Conference, The State Of the Story |VIP Summit [Magnet Media Films] and more.

Versatile and innovative, Samantha is an undisputed leader in the Metaverse and is a reference for future generations to come. When asked about her idea of leadership, she voices her authentic beliefs. “In my opinion, leadership means the ability to follow one’s heart to achieve a mission and uplift others along the way. With the VNCCII project, I created the SuperHeroine virtual avatar character not as a gimmick or to be the saviour of others. People don’t need others to save them. The power lies within every human being on this planet to activate their true inner potential. A leader helps others see that purpose inside of them for the betterment of humanity. True leadership is about the ‘Return of Impact’. Will your legacy leave the planet better off and in a positive state because of your actions? As the old shamanic tale of the two wolves said, there is a good wolf of positivity and a bad wolf of negativity. Which wolf do you choose to feed? The good wolf of pragmatic optimism is the embodiment of leadership,” she answers.

Samantha has always found inspiration in storytellers and world builders such as the incredible mind of Star Wars creator George Lucas, to the imagineers that worked at Disneyland. Walt Disney enabled room and space for others to lead in various creative project verticals and to thrive with abundant ideas. He also coined the term ‘guests’ for those that visited his theme parks, rather than the phrase ‘customers’. This reflects the progressive paradigm shift from the Web 2 to Web 3 mindset, with the shift from siloed Web 2 platforms to a positive Web 3 decentralized network effect of true community and social impact.

This love for the inner child and abundant creative infinity energy is what has always drawn Samantha to multi-dimensional characters in classic stories that undergo the hero’s journey, also known as ‘the monomyth’. These stages of the hero’s journey are also reflected in our own human avatar selves, which are vessels for our consciousness. We are all our own creative inspiration portals.

Leaving us with one such inspirational message, Samantha says, “My final words of wisdom would be to never give up on your dreams. See the world through the lens you choose. We all have a choice in life. A choice to be happy, to be free, and to fight for our dreams. It will never be easy, but setbacks are character building, and you can take comfort in the fact that this is part of the human experience. You are all the heroes of your own lives. Be the positive changemaker. Humanity needs us all right now to step into who we truly are. I challenge you to ‘be’!”