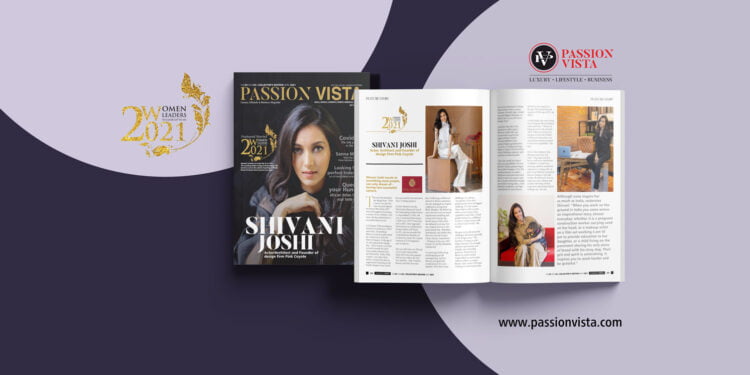 Shivani Joshi excels at something most people, especially actors, can only dream of – having two successful careers.

The year she launched her design firm – Pink Coyote, was also the time she participated in Femina Miss India 2013 west zone pageant, becoming a winner of two subtitles. Ever since, she has embarked on a successful dual journey.

A Graduate of the prestigious School of Architecture, CEPT university, Ahmedabad, Shivani received a gold medal for Architecture from the State of Gujarat. At the age of 23, she launched her design firm – Pink Coyote, to be able to build towards the kind of principles and practices she believed in. Today, Pink Coyote is not only a firm led by a woman but also an organisation boasting an all female designer team which has successfully executed more than 15 design projects.

In 2010, Shivani won the Kshitij Jain Memorial Award for Outstanding Studio Project in Ahmedabad. In 2011, she won ‘Consistent Performance’ in fifth year, CEPT University, and in 2012, ‘Best Aggregate Performance in Architectural Design Studio and Thesis’. In 2013, she was awarded the Gold Medal for Bachelor of Architecture from The Gujarat Institute of Civil Engineers and Architects.

The year 2013 also saw Shivani enrol in the Femina Miss India 2013 west zone pageant held in Goa, where she won two subtitles – Miss Timeless Beauty, and Miss Eyeconic Eyes. Following a childhood interest in theatre and dance, she also managed to complete a diploma in acting from BJAS, Mumbai. The following years saw her carry out many mainstream modelling and acting stints, but her big break came in 2020, when she debuted in not one, but two, Gujarati movies as the main female lead – Babubhai Sentimental, and Safalta 0Km. She even won the People’s Choice Award, Ahmedabad – ‘Debutant of the year 2020: Female’ for the film Babubhai Sentimental.

As careers go, both acting and designing are all encompassing. And yet, Shivani managed both simultaneously for years together. Were there many challenges, we ask her. “Acceptance of my dual profession has been my biggest challenge. For that reason I have had to walk an extra mile to assure many of my capabilities and skills. I recall people having less confidence to trust a young woman with a certain scale of work.” she reveals.

She goes on to talk about the challenges she faced, especially in the design sector: “The function of design is to let design function. We strongly advocate minimalism, eco-friendly and sustainable practices. Sometimes, to deliver to match market trends which are not in sync with our ethics, is a major barrier. Also a team of 50 men working on construction sites are not accustomed to taking instructions from a young woman. Initially, that mindset was the biggest challenge we had to face, as an all women design firm.”

And face they did, with passion as well as grace. Shivani credits her zeal to succeed in part to her super-achiever family. Her grandfather was a gynaecologist, grandmother an M.A. in child psychology, father a Senior Vice President with a leading corporate, and mother an educationalist.

“My role model has always been my grandfather. He was the first Indian gynaecologist from John Hopkins, USA. His fearless journey to explore different continents and come back to serve his country and his everyday dedication taught me to have strong ethics, work hard for excellence, and fight relentlessly for your dreams. He built a new hospital at the age of 62 and performed surgeries till the age of 92,” she shares.

A solid family also went a long way in helping Shivani balance work and home. “I believe in being present in the moment 100%. When you focus your energies on the task at hand without any distraction, you can produce optimum output to one’s best capabilities,” she says.

To be at her optimum best, Shivani ensures her ‘me-time’. “Dancing is my first love as well as my meditation. In addition, I spend every morning outdoors amidst lots of greenery or along with my pets. Since both my professions have no Sundays, I also like to take off and travel. I love to experience new cultures and cuisines and bring all that inspiration and energy back to recharge me,” she says.

Although none inspire her as much as India, reiterates Shivani: “When you work on the ground in India you come across an inspirational story almost everyday; whether it is a pregnant construction worker carrying sand on her head, or a makeup artist on a film set working 4 am-10 pm to provide education to her daughter, or a child living on the pavement sharing his only piece of bread with his stray dog. Their grit and spirit is astonishing, it inspires you to work harder and be grateful.”