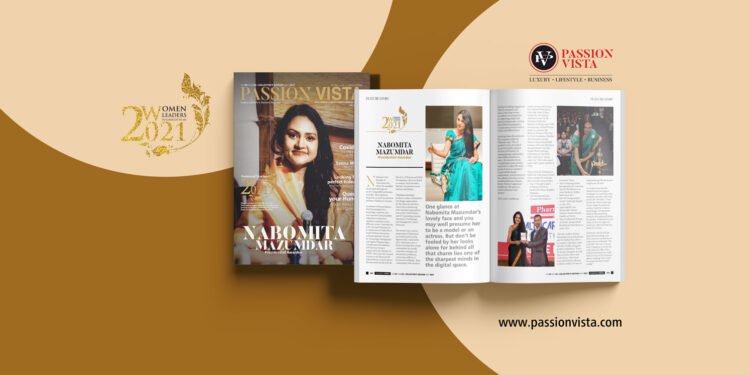 One glance at Nabomita Mazumdar’s lovely face and you may well presume her to be a model or an actress. But don’t be fooled by her looks alone for behind all that charm lies one of the sharpest minds in the digital space.

Nabomita is the Founder of ‘Nabomita.com’, where she amplifies meaningful messages to society using different formats of media. This empowers businesses to scale up and earn millions of dollars in revenue.

An alumni of the prestigious XLRI Jamshedpur, her knowledge, expertise and vast experience has propelled Nabomita to numerous significant positions across different sectors. Currently she is the National Chairman to Confederation of India Micro Small Medium Enterprises and International Council for Technology Management and Applied Engineering, a confederation of Industries and Business Owners supported by the Ministry of MSME. She is also the Council Advisor to the Board of All India Railway Council. Earlier she had joined hands with the Ministry of Women and Child Development. She is on Board to eminent Tech-Investors, Startup Communities as an Advisor and Mentor.

“Building technology products, online communities and design organisations for the future are my forte. I have been volunteering with esteemed organisations such as the United Nation and ICT promoting women’s education in Technology and Management,” shares Nabomita.

The website was a natural progression of Nabomita’s successful journey in the digital world. Launched in 2016, Nabomita.com is a Media-Tech firm that creates communities for brands, corporates, startups and educational institutions, connecting millions of businesses worldwide.

These communities solve business problems building engagement with its consumers and users, impacting revenue in millions. Its strength lies in employing people with diverse backgrounds, working from different geographies. Communities are built both in online and offline format.

Speaking about the milestones the company’s achieved, Nabomita says, “We are grateful to have triumphed in pioneering this segment. We have lived history by managing large communities with million members or more. The expertise lies in evangelising a cause, product and practice, where the target group of users or consumers transcend into brand ambassadors. Several sectors of the industry have been served including Business, Finance, Retail, Venture Capital and Healthcare. The goal is to create a business-ready market.”

With such a trailblazing record, awards and honours have followed Nabomita at every step. Some of these include the ‘100 Women Achievers Award’ by the President of India for Ministry of Women and Child Development, Global Woman Achievers Award as the ‘Business Woman of the Year’  by Unity Foundation, Mumbai 2019, felicitation during Nasscom International SME Conclave 2018, and felicitation during Rajmata Vijay Raje Scindia Birth Centenary Celebration in New Delhi 2018, which was a “dream come true”. She is also a great orator and a regular speaker at TEDx.

Not just awards, Nabomita as well as her work speak for itself if you consider the rankings she’s received in recent times:

After her mother, Krishna Mazumdar, her grand-parents, and Dr Mathai Fenn who is her mentor, Nabomita counts Maneka Gandhi among her greatest inspirations: “It was an honour seeing her at work. She is a leader with a view to the future. I have been truly moved by her efficieny to deliver results. Her way of implementing difficult projects inspires me till date.”

A strong woman herself, Nabomita says her biggest challenge was ‘not being taken seriously even after delivering on the job’. She adds, “I wait for the day where leadership will no longer be gendered, as there would be a balance. Interestingly, the pandemic induced telecommuting created a level-playing field for the genders. Enabling this even when we have the option to work from office will function better for women.”

Nabomita, who herself has been telecommuting since 2010, says you can find her at work even on weekends. “We work 24/7. We are a ‘Virtual First’ Company, so we do not work from any office. On a weekend morning you could find us at any of our favourite places, working! This is how we ensure the best of both worlds.”