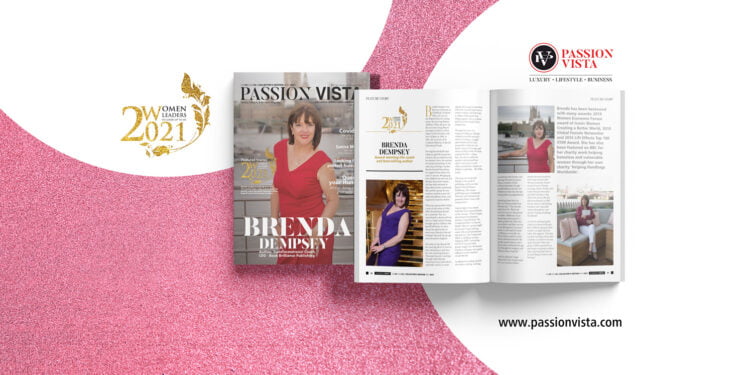 Brenda Dempsey was born in a tenement in Clydebank, Scotland. When she was 10, she helped others by raising money for starving Biafran children. When she grew up, she survived a long abusive marriage to achieve a B.Ed Degree while homeless with four children in 1996. In 2001, she received a Post Graduate Diploma in Special Educational Needs.

Proving beyond doubt that whatever goal she turned her mind to, she exceeded beyond her dreams. Soon, she realised her dream of teaching. In the early days of being a teacher, Brenda learned that asking for support from others was a key to success. Bringing up four children was not easy, but Brenda, the action woman, did that and continued to help others in her community. She started a group for new mothers, worked as part of a multi-disciplinary team, and organised events for charity.

When her parents died within a year of each other in 2004-2005, Brenda found herself at a crossroad. This was exacerbated as she herself was now an ‘empty nester’ having brought up four children who had all left home. So when she got an opportunity to move away from her beloved Scotland, she took the plunge and relocated to England.

Not alien to risk, Brenda left her teaching job of 25 years to turn entrepreneur and start her own coaching business – ‘Diamond Success Coaching’, through which Brenda empowered many individuals, especially women, to create significant change in their lives and work. Brenda’s team too is mainly women, and fostering a culture of hiring the best, despite gender, race or culture, puts her streets ahead of her competitors.

Through her years as a woman of influence, Brenda collated around 60 women’s stories of courage, struggle and transformation from around the world into two books, Voices of Courage and Voices of Hope, both of which reached the best- selling lists. She also co-authored another international best-seller ‘Conceived to Lead’ which included her chapter on Holistic Leadership – She Who Leads.

This foray into books led Brenda to the world of publishing, which saw her launch ‘Book Brilliance Publishing’. The unique publishing house champions Diversity and Inclusion and promotes future voices with young writers.

Interestingly, it was a book itself that first inspired Brenda on her journey. “When I began my personal development journey, I read the book ‘The Compound Effect’ by Darren Hardy. That was a great insight for me and I began putting some of his recommendations into practice. The Compound Effect is a brilliant analogy. Napoleon Hill’s ‘Outwitting the Devil’ also provided greater insight into the human existence and again was a great influence on my mindset,” reveals Brenda.

In addition to reading, Brenda also enjoys cooking, walking, socialising with friends, and playing the piano or guitar. But as a mother of four and grandmother of eight grandchildren, she feels her children are her best therapy and greatest accomplishment.

Speaking about how, for her, it is always people first, Brenda says, “I love people and I love life. This is my secret to success. My passion to make a difference keeps me going and seeing how I make people feel, what they can achieve and their success is my driving force because I know I CAN and DO make a difference in my life, the life of others and the world. Steeling Steely determination for the greater good, tenacity and a great sense of humour has got me through the toughest and darkest times of my life.”

And we all know ‘tough times don’t last, tough people do’. As a woman’s leader, Brenda has been bestowed with many awards: 2019 Women Economic Forum award of Iconic Women Creating a Better World, 2010 Global Female Networker and 2016 Lift Effects Top 100 STAR Award. She has also been featured on BBC for her charity work helping homeless and vulnerable women through her own charity ‘Helping Handbags Worldwide’.

As a brave and leading life coach, we cannot let Brenda leave without asking her how women can uplift their lot today. She suggests, “Develop an early morning routine that is holistic in nature to set you up for the day. Write your goals; it allows greater focus and keeps you going to achieve them, knowing that there is no such thing as failure, only learning.”