Anna Boyrazyan, one of today’s premier sopranos, has cultivated an operatic repertoire, representing a colorful vocal range that captivates and mesmerizes a wide range of audiences. As quoted by the spellbinding performer herself,

“It was an empowering feeling the day I realized my vocal range, and it set me free in being able to choose the musical pieces that enchanted me.”

With her father’s direction and his multiple years of creating music with legendary ethnic performers, Anna Boyrazyan was inspired to create her artistic path at a very young age. Her arty trail began with The Music Teacher’s Association of California for an impressive span of 9 years where she was presented and challenged with a curriculum that required for her to strive for focused musical excellence in performance, technique, ear training, sight-reading/ singing, and music theory. Her remarkable span led to her achievement of the Medal of Honor in recognition of excellence in music education.

Anna’s endurance and passion led her to priceless studies with distinguished vocal coaches and conductors, including Grammy List Nominee and winner of the San Francisco Opera Competition, Dr.Demetra George.

Dr. George opened new doors for Anna’s vocal expertise by discovering her innate gift of true coloratura soprano abilities and a high vocal range. Dr. George introduced Anna to the highly praised Maestro Frank Fetta, whom she had the opportunity to perform with. Anna has performed as The First Lady from Die Zauberflöte and Susanna from Le Nozze di Figaro, both by Wolfgang Amadeus Mozart.

“Anna’s rendition of Olympia from Les Contes d’Hoffmann by Jacques Offenbach is flawless,” commented by a leading opera critic.

“Her effortless performance of Der Hölle Rache from Die Zauberflöte by Mozart represents a magnificent top and virtuous coloratura.”

In addition, Anna has collaborated with well-known pianist Harold Eisberg, who performed with Leontyne Price, Roberta Peters, Robert Merrill, and many other masterful Metropolitan Opera artists. Anna is a true artist whose vocal presence stands out, oozing with class and possibility.

When Dreams are Lived ….Literally 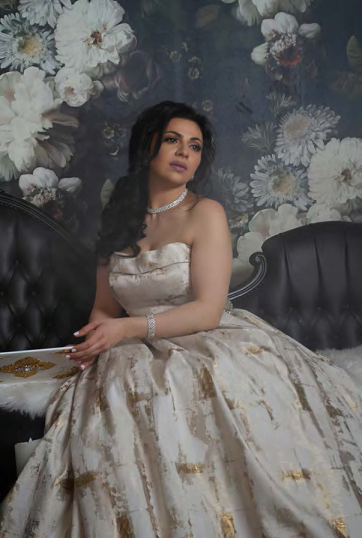 “You’re given the opportunity to be dramatic and act naturally on stage. It’s a chance to release my inner thoughts and express how I am feeling, to release my inner child, without anyone judging on how I behave or what I believe. It feels hypnotizing entering the role and the character, makes you enter a unique realm away from reality”-says the critically acclaimed soprano.

Anna’s timeless vocal experience spans from musical appearances in television series to live concerts. Her studies have ranged from full understudy roles in operatic performances with full orchestras with the Casa Italiana Opera Company to solo performances and headline events. As an expressive singer supporting numerous humanitarian efforts, she has also performed at philanthropic events, charity fundraisers, and non-profit foundations.

Anna successfully achieved many merits for her contribution to the arts. She also received the “Armand Tokatyan” grand prize award twice for best voice performer. Anna’s achievements further developed recognition by the United Nation’s, World Peace & Diplomacy Organization, where she was appointed to the honorary position of Peace Messenger; furthermore, receiving the medal of honor in the field of peace and humanities. Anna achieved yet another milestone when she received the honorary doctorate in Musicology from the Young Scientists University. Her affiliation with The Open International University for Complementary Medicines of Sri Lanka has awakened her interest in discovering the healing factors behind the frequency of sound. Her multiple travels to India and Sri Lanka have also produced an uproar amongst the citizens of both countries to have her a part of their culture’s artistic industries. Receiving special excellence awards for her unparalleled talent in music as an outstanding Soprano from both countries, Anna’s support and blessings empower her to continue fulfilling her mission to contribute to humanity with her passion for music.

In addition to her music education background, Anna graduated from high school as valedictorian and continued her impressive studies at the University of California Los Angeles (UCLA), obtaining a bachelor’s degree in Psychology.

Anna considers her studies in psychology from UCLA to be a strong foundation for her ability to evaluate, interpret, and truly perform her timeless pieces.

Anna Boyrazyan’s studies, both artistically and academically, have helped her become the captivating performer she is today. A winner of multiple vocal competitions, Anna is one of the most promising emerging talents in the world. Her passion is for everyone in the world to be moved by her true innate gift and to inspire artists who have lost faith in a dream they once believed in.

The earth has its music for those who will listen, Its bright variations forever abound; with all the wonders that God has bequeathed us, there is nothing that thrills like the magic of sound.