Seek for Real heroes through Reel

An Indian with a high lifestyle and successful career in USA, suddenly decides to come back and settle in his origin
country, is answering a call to serve his own motherland India. Jay Malaviya wants to give back, he wants to discover the hidden talents in Gujarat and make celebrities out of common men. He has started producing films, tv serials, web series, music albums in order to give opportunities to talented people in India.

Years back, when he went abroad, it was ideal transition of  local to global, and after establishing himself and making his mark in USA, he sensed to come back to India, setting an ideal example of reverse diaspora, coming back to roots and serving his own nation.

Malaviya has been in the hospitality industry since 1996, when his father Kirit Malaviya purchased their first motel in Boston. He learned and experienced every aspects of the business there.  He graduated from Northeastern University in Boston, with bachelors in Business Administration.

Malaviya found and initiated S2J Consultants in 2015 with focus on immigration, especially family immigration as he could see that families were being torn apart. In 2016 he has also opened up operations in India as lot of families needed assistance to be together.

“My passion in life is work, work and work. Preferably such work that keeps my interests intact and is beneficial to society. ” I have started entertainment, immigration, hospitality business under the umbrella of S2J. My inspiration has been my parents Kavita Malaviya and Kirit Malaviya, president of Vallabh youth organization – Vyo Boston. He has been serving his community, putting aside the materialistic benefits. This has inspired me to serve my fraternity, says Malaviya, who is settled in Ahmedabad- Gujarat now.

Q-The key to realizing dreams is to focus not on success but significance, and then even the new beginning with small steps take on a greater meaning

A- While ago, I landed in India just to wind up my properties in Mumbai. It was during that time, when the idea started making its way to serve our countrymen in India. My projects mainly consist of movies, music, hospitality, immigrations and lot of philanthropic work. Entertainment it may be, but it is mending for betterment of our fraternity. It is package of Empowerment, enrichment, entertainment and economical development.

As my wife Niketa says that “If 331 million populations in US has such a huge number of talented people than India with 1.4 billion population must be having fourfold more talented people.” Let’s go get it.  The very thought made me think to come and settle in India and discover this hidden talents and put them on world stage.

Niketa has stayed in UK and USA only. She has never visited India but that did not stop her from coming back and settle here. The most surprising thing she said is that she has fallen in love with India and its vibes. This expression is the first step in making us serve India.

Q – The global exposure and experience that you have, stands a chance to bring noticeable change in Indian cinema.

A- We want to bring Hollywood to Dhollywood, particularly change Gujarati cinema in terms of techniques, tools, direction, scripts, artists and publicity as well as the networking style. For example, the term publicist is new to Gujarati cinema, while it is the most common term with entertainment abroad.

Q-As a businessman, you are expected to select an industry. But industry of music &amp; movies is rare choice.

A- I have been in music industry since 2002 in USA. My partner is famous Dj Edubble. He had a music mind-set while I was inclined towards entrepreneurship. After putting it together in USA, it was time to go and fetch our own dreams.

Q- What is your life quote

A- “If you are not first…..you are last.” Small quote it may be, but has a bigger meaning. The advance and conquer approach is about being the absolute best. Never settle for second place.

A- I have a home office, that makes it more convenient to seesaw between work &amp; life. My wife is a co producer in my company. She is better half in business too; nothing goes ahead without her approval.

Moreover being husband and father builds a quality of responsibility & dedication in oneself. I will prefer not to say “No” to the demands made by my family, instead  prefer to work hard and make them happy.

Q- What are the upcoming projects

Q-Has the pandemic affected your profession in entertainment industry

A- Infact Pandemic has not stop me from working, but has motivated me to work even more. The reason that many people have lost jobs during this time and talented people are sitting home doing nothing. S2J is catering lot of work and jobs to people and letting them use their skills and talents to earn a living. We have signed many artists for three years contract during this time. We were working taking the required precautions.

A- We follow American footballer Tom Brady TB12 program that helps us to keep ourselves fit. It is a very hard program to follow, but if you follow it, it will be very hard to stay unfit.

Would you accept the facebook friend request of your Mother in law ? Q- MIL is famous abbreviation for...

Not Bollywood or Hollywood Lockdown in woods Tete-tete with Jackie Shroff When you ask a big Star, Indian... 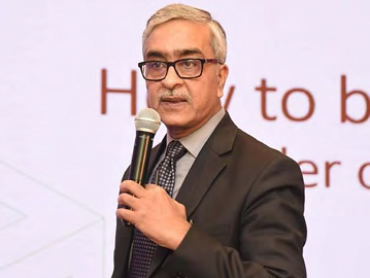 THE BUSINESS OF ORGANIZATION DIAGNOSTICS. Dr. Rajesh Mohan Rai is a Human Resources professional and a...

We use cookies to ensure that we give you the best experience on our website. If you continue to use this site we will assume that you are happy with it.Ok